Over half of U.S. women at risk of losing abortion access 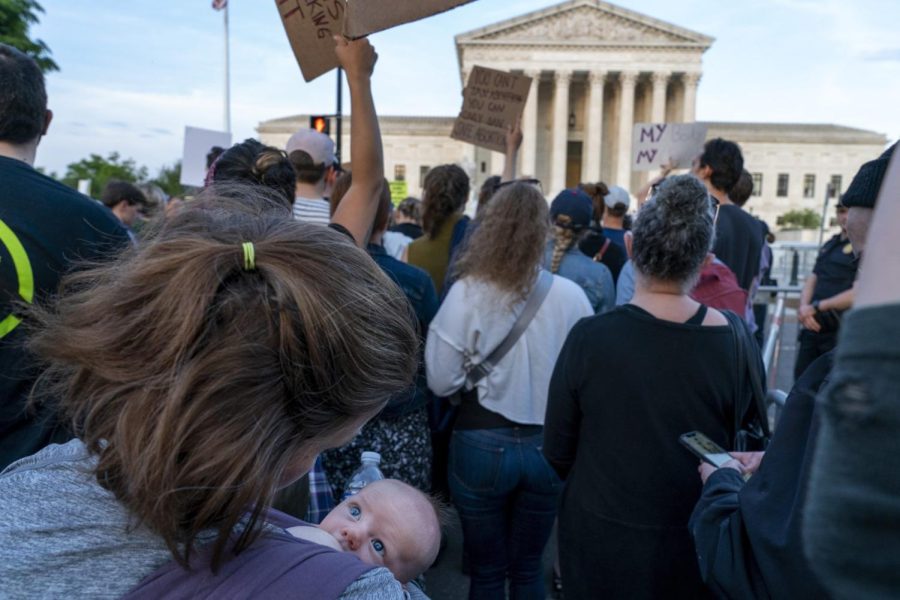 Katie McDevitt of Washington, nurses her 6-week-old baby Declan, as they join demonstrators protesting outside of the U.S. Supreme Court, Tuesday, May 3, 2022, in Washington. A draft opinion suggests the U.S. Supreme Court could be poised to overturn the landmark 1973 Roe v. Wade case that legalized abortion nationwide, according to a Politico report released Monday. (AP Photo/Jacquelyn Martin)

The Supreme Court intends to overturn the United States’ federal protections of abortion rights, paving the way for over half of U.S. states to either heavily limit or outright ban the practice, according to a bombshell leaked draft majority opinion released by Politico on May 2.

While not currently binding — justices can and occasionally do change their votes prior to an official decision being made — if the decision does hold, it would signify a stark renunciation of both Roe v. Wade and a subsequent 1992 decision, Planned Parenthood v. Casey, that upheld most of Roe. A final decision is expected by the end of the Court’s term in June.

According to an anonymous source who spoke with Politico, four of the five Republican-appointed justices — Clarence Thomas, Neil Gorsuch, Brett Kavanaugh and Amy Coney Barrett — voted alongside Samuel Alito following oral arguments in December and remained steadfast in their decision as of the time of the leak’s release.

“I wasn’t surprised,” said DePaul freshman Emma Bretzlaff. “After the death of [Ruth Bader Ginsburg], I could see this coming. It’s terrible, but isn’t shocking given the political climate today.”

Currently, 18 states have either “zombie laws,” “trigger laws” or both that would all but certainly ban abortion within the state’s borders if Alito’s decision holds. Zombie laws refer to abortion bans enacted before 1973’s Roe decision that could be reinforced if Roe is struck down, and trigger laws are laws passed after 1973 that would outlaw abortion within 30 days if the Supreme Court struck down Roe.

“I was thinking about moving to Nashville after I graduate, but I don’t think I will anymore because of the possibility [of Roe being overturned] being up in the air,” said Cassie Limberakis, a freshman at DePaul who spoke at an abortion rights sit-in on DePaul’s campus Thursday.

Additionally, a number of states have implemented bans on abortion prior to fetal viability — typically about 24 weeks of pregnancy — that would take effect if Roe were overturned.

In total, over half of women and girls of reproductive age live in states likely to seek either heavy restrictions or outright bans on abortions, according to the New York Times. Predominately located in the U.S. South and Midwest, many states hoping to impose these laws are located next to one another, which would force residents seeking abortions to cross several state borders in order to receive care.

“A whole swath of the Midwest is going to live in an abortion desert,” President and CEO of Planned Parenthood of Illinois Jennifer Welch told DePaul student journalists. “Patients are going to be forced to choose between traveling thousands of miles for the care that they need, or pursuing illegal alternatives, or keeping an unplanned pregnancy. These are devastating decisions for patients to have to make.”

However, Illinois stands out as an exception in the Midwest — in 2019, the Illinois Reproductive Health Act passed, codifying the fundamental right to abortion into state law.

“We are the haven in the Midwest,” Welch said. “We could see between 20,000 and 30,000 additional patients each year for abortion care in the state of Illinois.”

Anticipating that the Supreme Court could overturn Roe, Planned Parenthood of Illinois has expanded significantly in preparation for the expected influx of patients.

“In the last five years, Planned Parenthood of Illinois has built two new health centers — one in Flossmoor on the Indiana border, and one in Waukegan on the Wisconsin border,” Welch said. “We’ve doubled the size of two health centers, including the one here in the Chicago Loop. We’re looking at more buildings, and we’ve launched telehealth care. We’ve been preparing for this for so long, because we know that patients aren’t going to have anywhere else to get the care that they need, and we want to be here no matter what.”

Alito’s reasoning for overturning Roe v. Wade revolves largely around the concept of a right to privacy. The 1973 Supreme Court decision determined that the Fourteenth Amendment’s due process clause implicitly guarantees this right, despite the Constitution never explicitly using that phrase.

“This right of privacy, whether it be founded in the Fourteenth Amendment’s concept of personal liberty and restrictions upon state action, as we feel it is, or, as the District Court determined, in the Ninth Amendment’s reservations of rights to the people, is broad enough to encompass a woman’s decision whether or not to terminate her pregnancy,” the 1973 decision reads.

Alito, however, described the decision as “egregiously wrong from the start,” arguing that because the decision was “remarkably loose in its treatment of the constitutional text,” the decision should be overturned.

By weakening the right to privacy on a federal level, legal experts and activists have expressed some concern that such rationale could be used in the future to overturn a long list of other rights not explicitly listed in the Constitution — such as the right to contraceptives, non-heterosexual sex, same-sex marriage and even interracial marriage.

“This is a war on individual rights,” Welch said. “This is a war on privacy. And once they achieve their goal of making abortion illegal, what are they coming for next? Birth control? Marriage equality? This is absolutely a war here in the United States.”