Opinion: Keep the rosaries away from the ovaries: Roe v. Wade and bodily autonomy 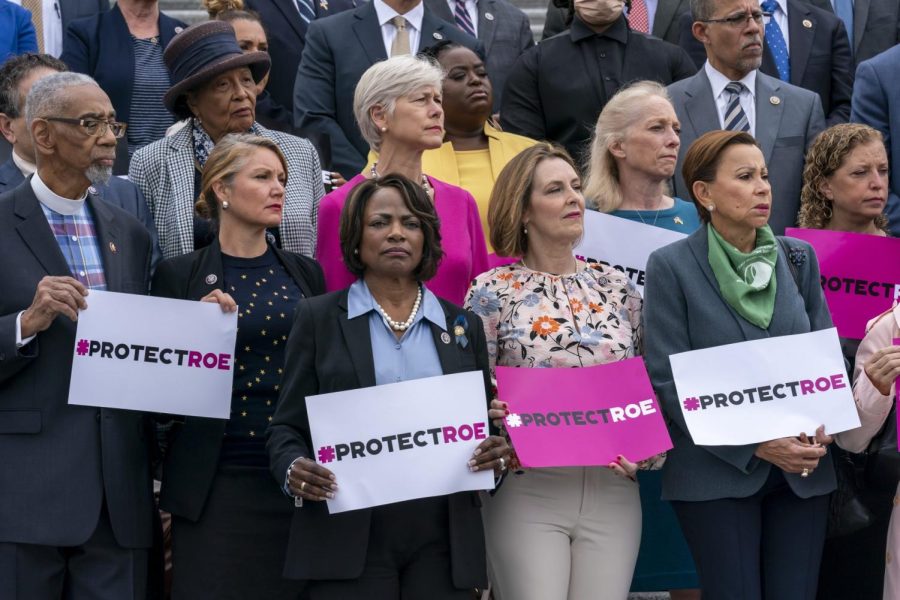 House Democrats hold an event on the Capitol steps on the Supreme Court draft decision on Roe v. Wade after the Senate failed to pass the Women’s Health Protection Act on Friday, May 13, 2022.

After the leak of a document of the Supreme Court obtained by Politico suggested that the votes to overturn Roe v. Wade have already been cast, a debate about reproductive rights and bodily autonomy has sparked across the United States.

This decision by the Supreme Court may take away the federal protections on safe and accessible abortions that have been in place since 1973, impacting the lives of millions that may not be able to terminate a pregnancy if their state doesn’t want them to.

As is the long-standing tradition of hetero-passing, cis men like me in this part of the world, I will talk about myself and my life in regards to a topic that can’t possibly include me directly.

Less than a month after I turned 18 years old, I decided to go to the doctor and ask for a vasectomy. It was a decision that I had been thinking about for several years at that point, and I felt pretty confident in it. In my case, it was that I didn’t want to have children, and I wanted a procedure that would help with that wish.

It wasn’t something that my family took well at first. Both my mom and my dad wanted to have grandchildren, and alongside my brother and some teachers, thought that it could be too early to make such a big decision.

Most of the physicians I met weren’t very supportive either. They couldn’t believe I wanted this, and thought that maybe I wasn’t aware what a vasectomy was or that I didn’t know any other ways to prevent pregnancies. They tested my knowledge, but I knew my sex ed.

But the process went on, and after a few months I was able to get that small surgery that gave me the control over my future. It took some time, but ultimately my family came around to see my point of view, and understood that this was not a rushed decision and that it was what I wanted.

I even remember clearly when my father called me — he was living in a different city at that time — and told me: “I may not agree with you, but it is your body. So, it is your decision.”

In the end, it was easy. Even though there were doubts, nobody denied that it was my right to decide over my body and my future. And I can almost hear all the women reading this and thinking: “Must be nice.” That is what privilege looks like.

And that is my main complaint around this issue. Why must people that can get pregnant constantly fight for the right to decide over their own bodies?

DePaul sophomore Daniela Hernandez adamantly believes everyone should have agency over their bodies.

Nine powerful people on the Supreme Court are deciding over the rights of groups of less privileged people, based on their own interests. This tends to lead to decisions that do not account for the realities faced by those most affected.

For example, as a study from the Guttmacher Institute showed last year, it is clear that the side pushing to ban abortions in the U.S. does so with the unsubstantiated belief that legal and safe abortions lead to increasingly higher numbers of abortions.

A research note by Amanda Jean Stevenson of the University of Colorado Boulder estimates that by the second year of a complete ban on abortions in the U.S., overall pregnancy-related deaths will increase by 21 percent.

“[If Roe v. Wade is overturned], access will be drastically limited,” she said. “We at MLA work with women that have suffered gender-based violence and sexual abuse, rape. This will make it harder to get an abortion, causing them even more harm.”

But even with facing the grim consequences of this decision, the most basic problem comes from treating people that can get pregnant, mostly women, as if they had no say over their bodies and their pregnancies.

Pilar Gonzalez, a mother from Dallas, Texas, believes that forcing a woman to have a child that she doesn’t want is detrimental for everyone involved.

“It is a right of each woman to be able to decide over her own body,” she said. “And to bring a life into the world when a woman is not ready to do so, it is preferable to terminate the pregnancy. Because it is altering not only the life of that woman and her world, but also perhaps bringing a life that is going to suffer, not having a suitable environment to be able to develop.”

They all agree that the leaked opinion of the Supreme Court feels regressive; a decision that will take us closer to a dystopian reality.

“[It feels] like ‘The Handmaid’s Tale’ where they talk about these things, and it’s like a dystopian thing,” Hernandez said. “We’re like, ‘Oh, this could never happen.’ But when you look at the small things that have happened in that show, it very much reflects what’s happening now.”

“It seems to me like a setback that they are questioning something that was already approved,” Gonzalez said. “I mean, that should not be in dispute. Why bring it up again … I mean, it was like taking a step forward, and now it’s trying to take it back.”

“We cannot return to the ages when women could not control their bodies, their lives,” Gaytan said. “We need to keep fighting. We cannot let politicians make these decisions for women.”

I don’t have a uterus, and I cannot get pregnant. My ownership over my body is not being put into question. Nobody is “just asking questions” or “using their free speech” to try to take away my right to decide when and how to have a child. No one is debating whether I should go to jail for choosing what future I want to have. And that should be the reality for every person in this country, no matter their sex, gender, income, race or state.

It feels like right now is the perfect moment to remember that the ideals of freedom and equality under the law that were written in the Constitution and in the 14th Amendment must be defended from those who would prefer to impose their ideals on the rest of the nation.