Not another magazine: Zine culture at DePaul 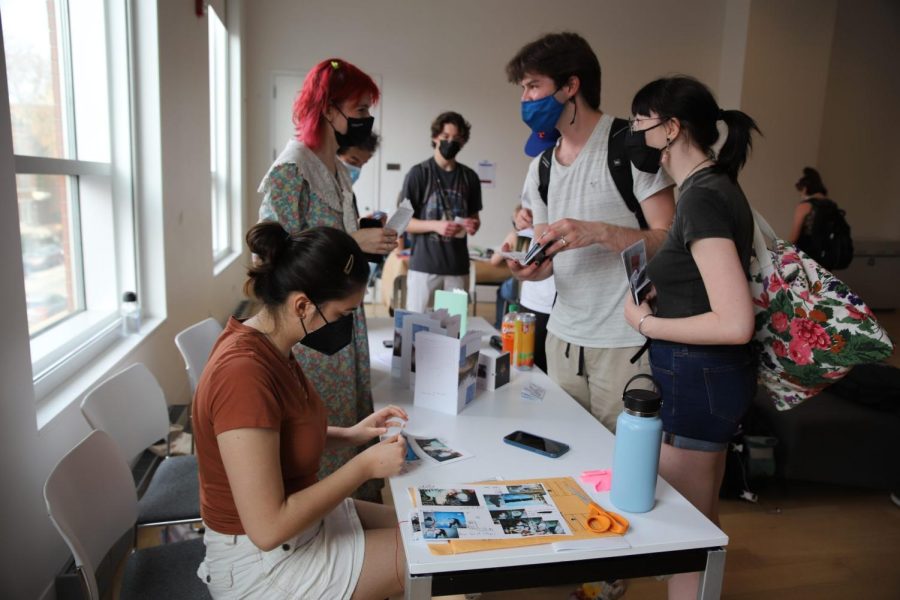 Students attend the first meeting of DePaul's zine club on May 11.

Students were able to escape the sweltering heat Tuesday, and learn about zines at the DePaul Art Museum, where the DePaul Zinesters held their first event. The club is dedicated to zines, self-published booklets that contain text and images, often artistic and political. Their subject matter varies widely, from economic policy to punk rock, but are commonly associated with underground movements and alternative subcultures, due to their independent nature.

“Zine” comes from “fanzine,” a portmanteau of “fan” and “magazine.” Because they are easy to make and produce, zines were a popular independent method of circulating information before the internet. Zines have a historical legacy as a form of amatuer press, which has its roots as a method of communicating ideas within various subcultures.

Students were featured at tables selling their zines as well as the Logan Square-based zine pop-up, ZINEMercado. Free zines were available courtesy of the club, including Zines and Other Things, an informational zine outlining the history of the format and where to find them in Chicago.

Students were also able to create their own zine pages using supplied materials at another table, to be included in a collaborative zine. Derek Potts, the archives processing assistant at the DePaul Special Collections and Archives, spoke about the history of zines and the university’s extensive zine archive.

Sophomore Chiara Conner founded the club this year with adjunct faculty instructor Heather McShane. McShane taught the Explore Chicago class “Alternative Cultures: Artists’ Books and Zines,” that Conner took their freshman year. Although Conner took the class remotely, they bonded with McShane, who asked them to be the Chicago Quarter Mentor for the class the following year. It was through the explore program that the idea for a zine club was born.

Conner’s background as the former editor-in-chief of their high school’s award-winning yearbook and interest in art and design translated well.

“After high school I still wanted to be involved in making publications and designing and writing things that I care about,” Conner said. “I really have a passion for telling people’s stories, and I wanted to find another outlet to do that.”

Conner and McShane were able to gather enough support among members of the class to start the club in February, where they had been planning this event since.

Freshman Noah Tomko-Jones took the class last autumn, and joined the club the following quarter. He was selling zines at one of the tables.

“We had this event to drum up publicity and awareness for the club,” Tomko-Jones said. “We want to get more people interested, but also events like this are a big part of zine culture — the whole idea of swapping and selling.” Jones is referring to zine fairs and festivals, popular in the zine community, where people gather to buy, sell and trade zines. “We wanted to try and represent that, to make that zine club’s thing,” Tomko-Jones said.

Junior April Larosa came to the event because she was interested in the artistic potential of the medium.

“Coming from a background that is really tech and web- based, it’s refreshing at times to be able to interact with something physical,” Larosa said. “I do appreciate the zine and the qualities and interactivity you can get through the different ways people create or construct zines.”

The DePaul Zinesters meet every Thursday in the IRL2 Lab.