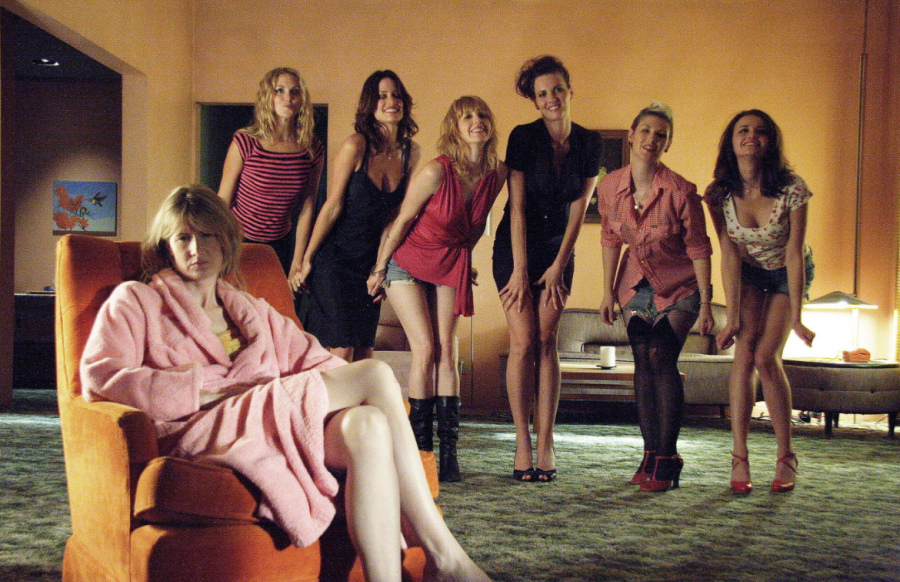 For the spring of 2022, David Lynch has supervised a 4K restoration of his most recent feature film, 2006’s “Inland Empire.” I was fortunate to catch a screening at the Music Box Theatre this Sunday. While I was not as enthralled with this movie as I have been with his other work, “Inland Empire” is a unique movie that only Lynch could make.

“Inland Empire” follows Nikki Grace, an actress played by the stellar Laura Dern, being cast in a supposedly cursed remake of an older movie. She later learns that in the original production the two leads were mysteriously murdered. Nikki begins to have strange dreams and her mental state starts to deteriorate. Weird occurrences, anthropomorphic rabbits and eerie hallways fill out the movie’s almost three-hour runtime.

Lynch has always been a divisive director. His first feature, 1977’s “Eraserhead,” is a movie I have seen numerous times and I am not sure if I entirely understand, but it is easily one of my favorite movies. Lynch’s work is notoriously obtuse, most of it being immune to interpretation due to the sheer bizzareness of it all. Despite his quirky movies or maybe directly because of them, Lynch is one of the most beloved directors in America. His movies are art in the purest sense of the word. Dreamlike, surreal and unexplainable, Lynch is not overly focused on getting his audiences to understand the plots or messages of his movies. His movies all elicit a strong emotional reaction, and “Inland Empire” is no different.

This movie is Lynch at his weirdest. The entire film is shot on a handheld camcorder, giving a very off-putting feeling to the movie and its disturbing contents. “Inland Empire” has to be one of the most visually distinct movies I have ever seen. While I did not really care for the story this movie tells, I was enamored with the look of this film. The low resolution of the camcorder adds a very unsettling element to the experience. The lighting is also a factor in this. Scenes can be so dark that it makes it very hard to make out what is happening, and then moments later the audience is bombarded with whites so bright that you have to squint your eyes. “Inland Empire” uses lighting and camera quality to make a movie that is like no other.

Dern is one of my favorite actresses and she does not disappoint here. The film left me with plenty of uncertainties, but I am certain Dern put her heart and soul into this performance. Dern is as fantastic in “Inland Empire” as I have grown to expect when I see her name in the credits. While I am not entirely sure if I fully understood the movie, I completely understood the turmoil Dern was experiencing and the effect of it on her character’s life. She masterfully navigates the full range of emotions in this mammoth of a movie and solidly cements herself in my Mount Rushmore of actresses.

Unsettled is the best word to describe how I felt watching “Inland Empire.” This is a long movie that kept me uneasy from start to finish. While I felt the emotions Lynch wanted me to feel, I can not say this is a movie I liked very much. There were many aspects I loved — camerawork and Dern’s acting chief amongst them — but this is a movie I am not itching to rewatch or recommend to my friends. The plot is nonsensical at times, and I was lost for a fair amount of my viewing. I have been lost when watching Lynch’s other movies and ended up loving them, so what makes this different?

One of my biggest issues with this movie is the length. This was actually an aspect I was looking forward to about this movie. I love Lynch, and I love long movies, so I expected this to be a match made in heaven. The movie has glacial pacing which made scenes drag on for what felt like hours. The movie loses a lot of momentum with this sluggishness, and I found myself forgetting how a scene started halfway through. I am sure this was all intentional and Lynch made the exact movie that he wanted to make, but this movie simply was not my thing.

“Inland Empire” is a movie that has a lot going for it. Unique and experimental filmmaking techniques, a stellar performance by Dern and one of the most uncomfortable atmospheres I have ever experienced in a movie theater all make this a movie that I am glad I got to see on the big screen. Unfortunately, it is not without faults. Slow-motion pacing, a nonsensical plot and a meandering story make “Inland Empire” fall flat. I think it is worth a watch for the sheer artistic nature of the project, but this movie was not for me.

I am giving “Inland Empire” two and a half out of five stars.