The results are in: SGA announces election results, make goals for future 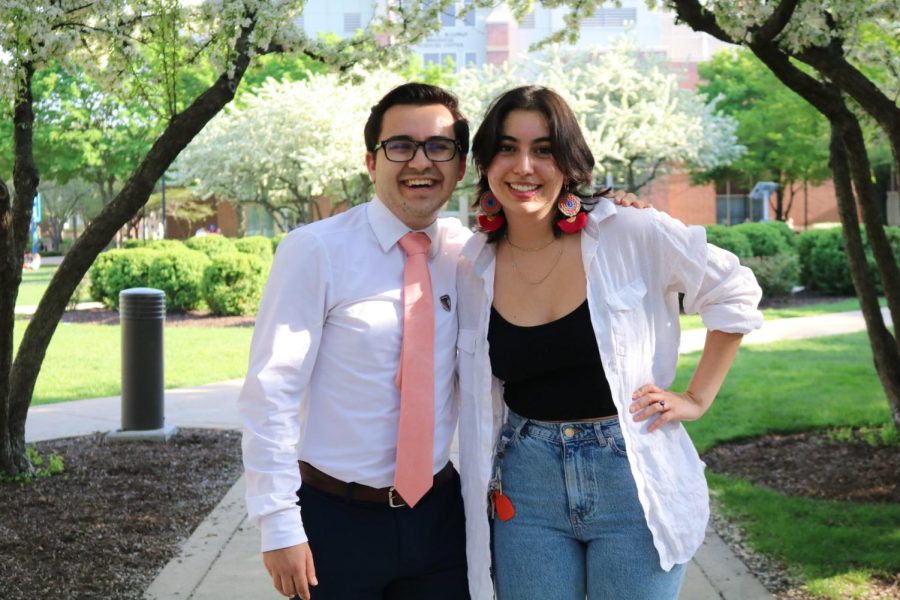 SGA president-elect Kevin Holechko [left] stands with vice president-elect Magoli Garcia [right]. The two have a goal to better the connection between the student body and SGA. Holechko said he thinks there is a disconnect now that he wants to change.

In addition to the transition of power at the top of the university, there has also been a recent change in leadership within the student body.

On May 7, DePaul’s Student Government Association (SGA) announced its election winners for the 2022-2023 academic year.

The newly elected presidential cabinet believes an improved relationship between the student body and student government is vital to DePaul’s advancement. Holechko and Garcia see themselves as the potential link between students and administration.

“As an education major…I’ve always had an interest in the administrative side of [things],”  Holechko said. “The privilege that student government has is basically unlimited access to DePaul’s administrators, and I believe I can do a lot to connect them with the student body.”

Holechko, a secondary education history major, called it a “natural move” to advance into the president’s seat. He believes his area of study and his past involvement in student government makes him the best fit to lead the organization.

The two candidates both believe more can be done to aid students through some of the hardships often experienced during college. As President and VP, Holechko and Garcia see their positions as an opportunity to place the university’s assets into the hands of everyday DePaul students.

“Student government has so much power in providing resources and information with our students,” Garcia said. “[We] saw this as an opportunity to bridge that gap.”

Holechko and Garcia have already started brainstorming concrete goals and a vision for the following year. Recently, SGA introduced a scholarship for first-generation students. The two candidates hope to take cost-centered initiatives like this a step further and decrease some of the financial obstacles that students experience.

For example, they’ve begun to explore the idea of expanding the use of open-source textbooks throughout classes at DePaul.

“We want to work with Faculty Council on taking this concept and applying it to more classes,” Holechko said. “[We’d like to] take some of those hidden costs that come with college that people don’t necessarily talk about… and reduce them.”

Another essential position was filled from Saturday’s election results that’s likely to be integral to reducing costs. Sophomore accounting major Caroline Snyder won the treasurer seat and hopes to use her role to better ensure that groups on campus receive the financial support they deserve.

Along with implementing new opportunities to ease the burden that comes with being a college student, all three of the newly elected officials hope to build on some of the past year’s accomplishments.

In April, SGA introduced a shuttle bus to run between DePaul’s campuses to give students a safe option for transport amid a rise in crimes on CTA. As treasurer, Snyder says she’ll do her part to keep the initiative in place when students return in the Fall.

“It’s really an added benefit to students,” Snyder said. “I definitely want to [keep] that running.”

For Holechko, one major issue during his time at DePaul has been lackluster communication and transparency between administration and students. On Tuesday, DePaul announced Dr. Robert Manuel as the university’s next president. Holechko sees the transition as an opportunity to improve the correspondence between the two parties.

“A lot of students have felt shut out,” Holechko said. “I think with Dr. Manuel, we have a wonderful opportunity to capitalize on improved communication…and one goal of mine for next year is to bring students and administration together.”