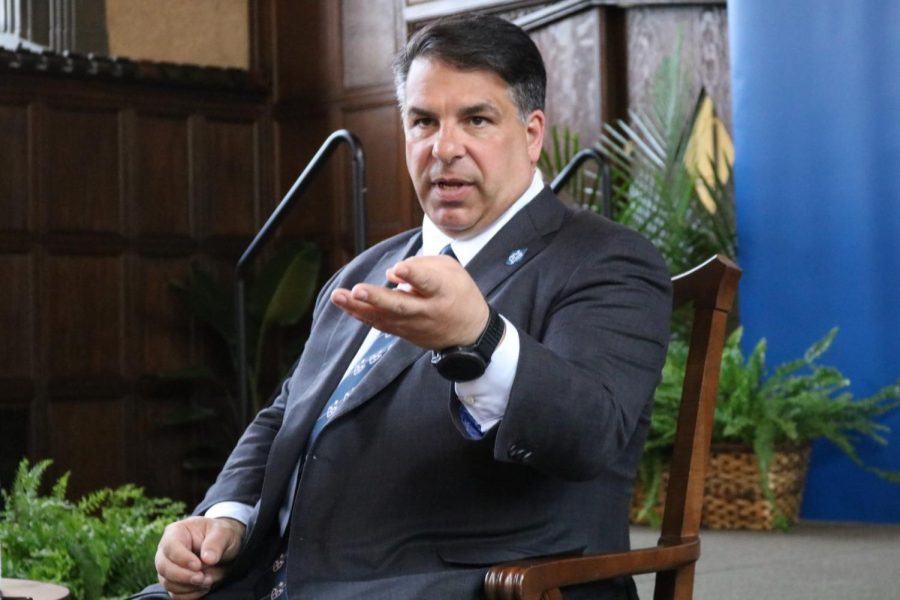 Robert L. Manuel was comfortable at the University of Indianapolis. He already spent a decade serving as its president and never applied for another job during his time at the university.

But when DePaul announced that President A. Gabriel Esteban would be stepping down after the conclusion of the 2021-22 academic year, Manuel became interested with what DePaul can offer as an institution and what he could bring to the table.

Eventually, Manuel was nominated for the job by a friend who works at Georgetown.

“I feel like I’m at my best at institutions that have faith based connections,” Manuel said in an interview with DePaul student media on Tuesday. “When you are at good institutions — like the University of Indianapolis, and you are doing well in those institutions — you are not applying for lots of jobs.”

Manuel ended up applying for DePaul’s presidency vacancy, went through the entire search process and was officially announced as the university’s 13th president Tuesday morning. He is the university’s second lay president, after Esteban, and grew up in the Episcopal Church, according to Newsline.

Beyond that, he attended Le Moyne College and Georgetown University, both Catholic institutions. In addition, he has served for the past six years as board member at Brebeuf Jesuit Preparatory High School and participated in multiple immersive religious experiences, including a service trip with the Jesuits to Kenya.

“There is unlimited possibility in what could happen here,” Manuel said. “When I went through the kind of search process and I looked at everything, the only thing that is stopping us is a failure of the imagination.

The Board of Trustees “unanimously” voted to approve Manuel as DePaul’s next president on April 21, according to a press release.

Esteban will officially step down on July 31 and Manuel will step in a day later.

On May 11, DePaul held a farewell ceremony for Esteban and his wife, Josephine, at Cortelyou Commons for faculty and staff.

The event had an array of hors d’oeuvres and refreshments for attendees, in addition to live music playing throughout the event. There was a short program held at the beginning of the reception, in which Esteban was able to address his guests and say goodbye to DePaul.

In his speech, Esteban spoke of his late father who served as a university administrator, but used to say that he much preferred to be a faculty member.

He ended his speech by thanking the community once again and then rejoined the festivities with his wife and university faculty and staff.

“I looked at it and said, ‘this is the place that could redefine quality coming out of this moment,’” Manuel said. “I started meeting with faculty, staff, students and the board and I thought there’s really no better place in the country to begin to redefine the future of higher education.”

At the University of Indianapolis, Manuel was known for engaging with the student body and was commonly referred to as “President Rob.” As he now starts to transition to DePaul, he said he wants to get to know the campus and talk to different governing bodies on what their vision is for the university.

“It’s kind of presumptuous for me to come to an institution that I don’t know the culture of, I don’t know the aspirations of the faculty and staff and say, ‘here’s what the president wants to accomplish,’” he said.

Manuel attended a reception to meet faculty, staff and students on May 10 in Cortelyou Commons. There were two receptions held that day, one at 2 p.m. and the other at 4 p.m.

Jay Baglia, an associate professor in the College of Communication, was in attendance at the 2 p.m. session, said that he is hopeful for the next president, and emphasized renewal in this transition of leadership.

“[He] hopefully will also usher in a sense of renewal that goes along very nicely with that sense of hopefulness. I feel hopeful,” Baglia said.

In a conversation with Gerald Beeson, DePaul Board of Trustees chair on May 10 at Cortelyou Commons, Manuel said that he wants to focus on faculty-driven curriculum, a point that Baglia said, in addition to expanding access, was important for the university mission.

“Is part of our Vincentian mission to students from all walks of life within Chicago, and from outside of Chicago and those two factors alone, I think, are very promising,” Baglia said.

During his time at the University of Indianapolis, Manuel helped usher in three new residential halls, developed the 150,000-square-foot University Health Pavilion and redeveloped a local industrial building into the new home of the R.B. Annis School of Engineering.

He also implemented a five-year plan that resulted in a boost in enrollment and increases in fundraising and the engagement of alumni.

Manuel, 54, and his wife, Wilmara, have three daughters. Prior to becoming president of the University of Indianapolis in 2012, Manuel spent six years as associate provost and dean at Georgetown.

“Throughout his distinguished career, President-elect Manuel has shown a deep respect for the power of education and the transformational opportunities it creates for students,” said Judy Greffin, chair of the Presidential Search Committee and vice chair for the Board of Trustees.

Manuel said that some of his goals in the early parts of his presidency is to meet with students, faculty and staff to learn more about DePaul and what he can do to remove any obstacles that are hindering the growth of the university.

“If a president doesn’t engage with those groups in meaningful ways — meaning more than showing up and offering a speech and then leaving, or really ask asking the questions about what the hopes and dreams are of those groups — then they can’t, I can’t engage in the development of of those aspirations into plans,” he said.

DePaul has had issues with enrollment over the course of Esteban’s tenure, with the university only recording an increase in undergraduate enrollment this past academic year. DePaul is also raising tuition by 2-3 percent for the upcoming school year.

Manuel pointed to his history of being able to fundraise money as an area of strength he can bring to DePaul and help provide more scholarship money for students.

“The fact that we serve a lot of first-generation students, that we have a diverse student population, that we are about having access to a world class education seems to be and should be the first thing in our minds,” Manuel said.

Engaging with the community is important for Manuel, he said on Tuesday. At the University of Indianapolis, Manuel said he attended any sporting, theater, lecture, event that he could on campus.

In addition, Manuel said he held four major town hall meetings every semester where anybody was invited to come and ask him questions.

Baglia also said he hopes that the new president will veer away from a focus on accomplishments and focus more on human connection within the university.

“I think that the emphasis there is less on finances, which is what my perception was of President Esteban after a relatively short amount of time,” Baglia said. “There was a lot of focus in terms of accomplishments, on economic issues, no mention whatsoever on grief, trauma aspects of the university that have to do with people.”

He added that, what he got from Manuel’s introduction to the university, is a greater focus on that human aspect.

“And I think what I got from his self-introduction this morning was somebody who recognizes the value of human capital in an institution,” Baglia said.  “A university is comprised of people. More than buildings, more than curriculum. And I think what he promises is a return to that emphasis.”

“The faculty are eager to partner with the president-elect in advancing DePaul’s reputation as a premier institution of higher education in providing students with a world-class educational experience,” said Sonia Soltero, president of DePaul’s Faculty Council, professor and chair of the Department of Leadership, Language and Curriculum in the College of Education.

Manuel will be making a step up from the University of Indianapolis to DePaul in terms of the size of the student body. At his previous university, it was a private school with about 5,600 students. DePaul, however, has over 23,000 undergraduate and graduate students.

He is also making a step up to a university that is in the Big East  — one of the largest basketball conferences in the country — and is home to a men’s basketball program that, albeit one that is currently struggling, had major national success a couple of decades ago.

“I need to talk to [athletic director] DeWayne [Peevy] and see what his vision is for that program,” Manuel said. “I am also a very big college athletic fan. I went to Syracuse as a master’s, I worked at Georgetown. I’m a Big East fan. And now, I have a new favorite set of teams.”