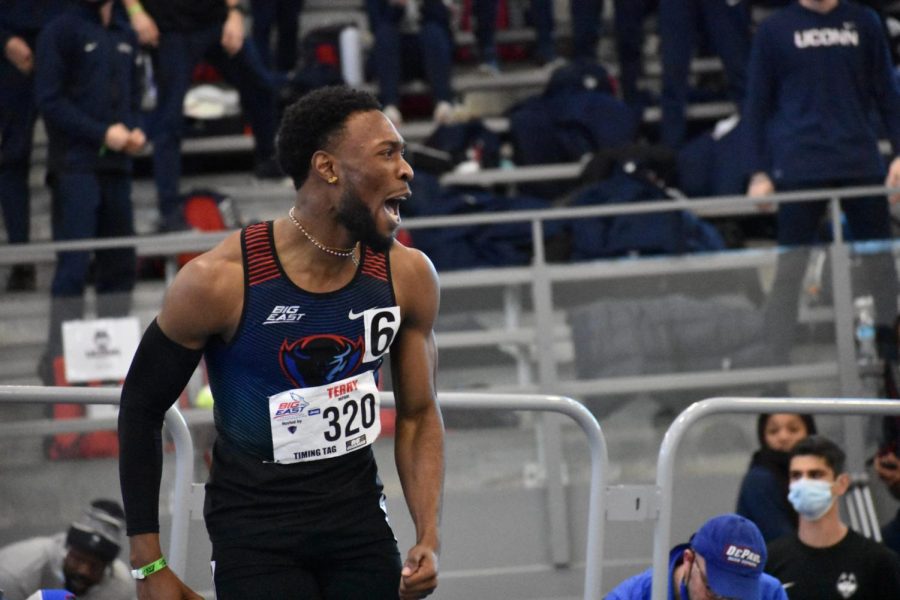 DePaul’s track and field team finished their two-day conference outdoor championships with four gold medals and 11 podium appearances, opening the door for play in the NCAA Preliminary Meets taking place May 25-28 in Fayetteville, Arkansas. Select student-athletes will be in attendance and participating at the meet. An official announcement will take place soon.

Day one of the meet started with a bang as junior Tori Carroll won first place in the women’s long jump. She took away the gold medal and title as Big East champion with a distance of 6.38m. The jump breaks the school record that was set in 2015.

“I was really shocked when I won,” Carroll said. “I was not expecting to jump that far. It was a really cool moment, especially since I was training really hard all season so it was nice to break that record.”

On the men’s side, freshman Alex Bernstein finished second in the men’s hammer event with a distance of 56.76m. In the same event, senior Ben Litwin finished fifth with a 56.04m distance and freshman Tommy Goggin finished ninth with a 49.06m distance. Sophomore Myles Marshall finished seventh in the long jump with a 7.02m distance.

Junior Jarel Terry and graduate Michael Stanley qualified for the final round of the 400m.

DePaul concluded the first day with a plethora of personal best time records in the men’s 100m race. Sophomore Cameron Attucks ran 10.59 time, while Marshall ran a 10.65, freshman Dominic Cole with a 10.69 and junior Zach Debelak with 11.11.

Coming off a strong first day, the team carried the momentum into the second day of events, sending a message to their national competitors. The men’s team led the way by winning the 4x100m relay race, behind the wheels of Marshall, Stanley, Attucks and Cole with a 40.42 time.

“Winning the 400 shows a lot of the work that I put in the season,” Terry said, describing what the achievement means to him. “It shows how much dedication and time that I had spent to accomplish what I wanted out of the race.”

In the same event Terry won, Stanley finished in seventh place, holding a time of 48.97.

Regarding the remaining track events, the men had top-10 finishes in nearly every event.

With his family in attendance, junior Jason Montano took first place in shot put with a 16.57m throw.

“Indoors, I did not do well and I wanted to come back stronger for outdoor season,” Montano said after winning gold. “When I won it hit me, like all the time I put in paid off and I was very happy about the outcome. It really meant a lot to me.”

Litwin finished fourth with a 15.29m throw in the same event. Montano and Litwin also competed together in the discus event, finishing in the top 10 with eighth and tenth place finishes on 42.97m and 41.41m throws.

The women contributed to the team’s impressive showing by adding top finishes of their own. Carroll went on to finish in the top four of the women’s 100m dash with a 12.12 time. Walker finished sixth in the 200m dash running a 24.32 time and finished top four in the 400m dash with a 54.16 running time. Ingram took home the bronze in the 100m hurdles with a 13.83 running time.

Freshman Casey Mulvey finished in the top five of women’s discus and shot put events with 41.97m and 13.56m throws. Jones finished in the top four in the triple jump with an 11.87m jump distance. Senior Esther Aldana, Walker, freshman Maia Mays, and Carroll finished third in the 4x100m relay with a 45.96 running time, while freshman Jade Pope, Mays, freshman Alyssa Leak and Walker finished fourth in the 4x400m relay with a 3:47.05 time.

With the team preparing for the preliminary rounds, Terry hopes that he not only participates, but has the opportunity to make DePaul proud.