Olivia Borowiak is racing to break every DePaul distance record 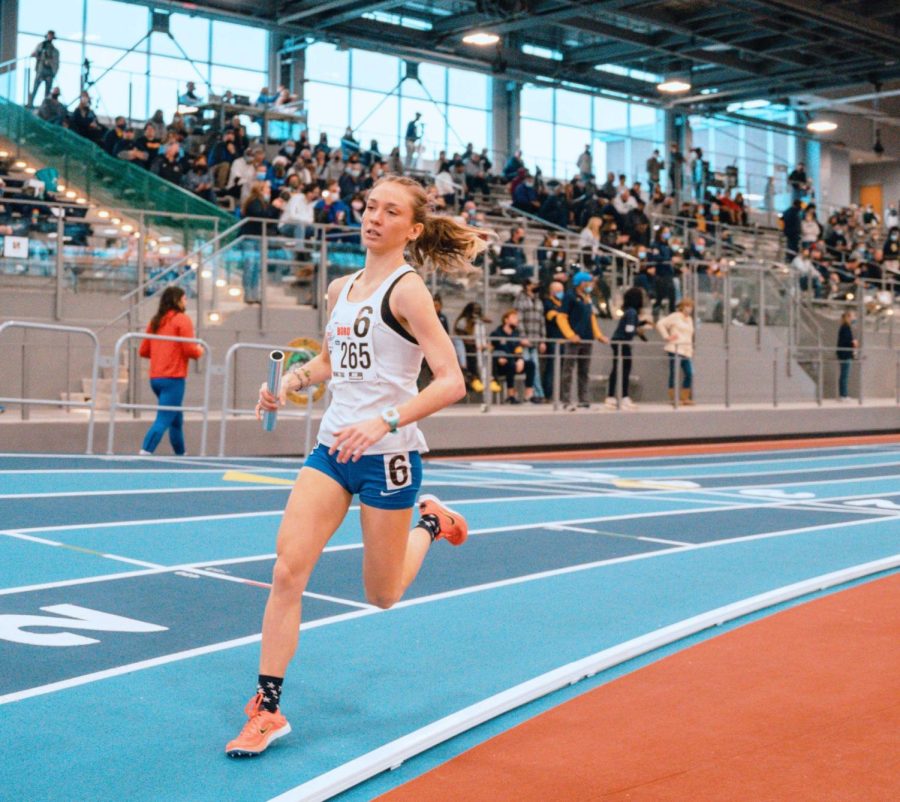 Olivia Borowiak runs in the Distance Medley Relay at the Big East Indoor Championship on Feb. 25.

The junior cross country and track runner has already beaten several longstanding DePaul distance records. In 2021, she beat the school’s best outdoor 5000m time, a record that previously stood for over three decades.

With two more years of eligibility, Borowiak is already lapping herself. She bested her own 3000m school record at the Big East Indoor Championships back in February. Going into this year’s Outdoor Championships, Borowiak has no intention of slowing down.

“It’s now a goal of mine to have all the distance records,” Borowiak told The DePaulia.

Based on the success she’s already had, the Yorkville native is well on her way.

“There’s only a few that I’m missing,” she said. “The indoor mile, which I technically have the time, I just ran it in the [distance medley relay]. I also need the 10k and the steeple [chase]. But I don’t know if I’ll ever do steeple, because it’s not really my event.”

Her times speak for themselves. But according to associate head cross country and track and field coach Geoff Wayton, Borowiak’s work ethic is what truly makes her special.

“She’s one of the most coachable young people that I’ve ever had the good fortune to work with,” Wayton said. “She shows up every day with a great attitude. Even when she has a bad day, you don’t find out until afterwards. From a coaching perspective, that’s what you’re looking for.”

Borowiak broke the DePaul record for the 1500m dash at the Wisconsin Classic on May 6, finishing in 4:23.82. On May 14, she competed at the Big East Outdoor Championships at the University of Connecticut, finishing 10th in the 5000m with a time of 16:46.51.

“The sport of distance running is about as egalitarian as you get,” Wayton continued. “You put in the work, show up day in and day out, you’re going to end up seeing some good things happen. So, she’s been really fun to coach. I’m really proud of her. The transition for me — I only got here in December — has been helped by people like Olivia, who have a great attitude every day.”

The work hasn’t gone unnoticed. It hasn’t come easy either. Competing in a year-round sport like distance running can be both physically and mentally taxing. As the spring season picks up, Borowiak is already dealing with the transition from indoor to outdoor competition.

“You never know if it’s going to be 90 degrees and rainy, or 85 degrees and 100 percent humidity,” Borowiak said. “Outdoor season really keeps you on your toes.”

Despite this, Borowiak is a creature of habit. She’s not one to change up her training regimen that’s been working so well.

“For preparations, I mostly keep everything the same,” she said. “I don’t change anything, just get to the meet, focused and prepared. I follow my same plan every time.”

If she quit today, Borowiak would still be one of the most accomplished distance runners in school history. But she hasn’t just made an impact on the record books; she’s made an impact on her teammates as well.

“I got here last year, she’s a year ahead of me,” said sophomore cross country and track and field runner Meghan Dieball. “Just watching her whole season breaking through has been really motivating for all of us. She puts in the work every day.”

Borowiak is “friendly to everybody,” Dieball said, and a leader on and off the track.

A writing and rhetoric major, Borowiak plans to attend graduate school after finishing her bachelor’s degree. She lost a year of competition due to the Covid-19 pandemic, so she’ll have an extra year of eligibility to break more distance records while she takes her master’s classes.

Her accolades are already historic for the school. Perhaps even more valuable is the praise she continues to receive from teammates and coaches.

“Larry Bird, his legacy at Indiana State was that he made everybody around him better,” Wayton said. “And that’s what Olivia has done. That’s the best compliment I can give as a coach.”

The acclaim and accolades keep coming in for Borowiak. Her future expectations are high, but she won’t let the pressure get to her.

“There’s always some pressure,” she said “But as long as I run what I know I’m capable of doing, I should be fine.”