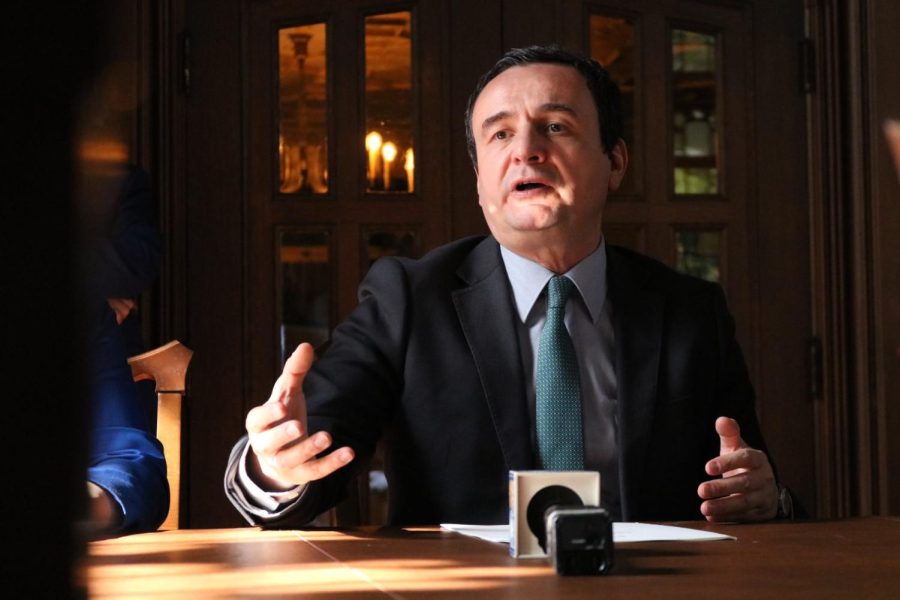 The Hidai Eddie Bregu in Albanian and Southeastern European studies program at DePaul hosted a public lecture by Albin Kurti, the prime minister of Kosovo, on May 14.

The Albanian studies program at DePaul is the first of its kind in American academia, Gazmend Kapllani, The Hidai ‘Eddie’ Bregu Visiting Chair for Albanian Studies, said. Its establishment in the beginning of the spring was made possible by an endowment from American Albanian philanthropist Hidai Eddie Bregu.

The prime minister found out about the program through reading one of Kapllani’s books. A week before the event, the prime minister reached out to Kapllani and said he wanted to come to DePaul and speak. Kapllani and his staff were able to organize a public lecture where Kurti could engage with the Albanian community and interact with the student body during his visit to the university.

“I wanted to speak to students [at] the university because the university is a place where you consume … [and] produce knowledge,” Kurti said. “I want to engage actively with students and to help them participate as much as possible in public and political life.”

Kosovo, officially known as the Republic of Kosovo, is a country  in Southeastern Europe located in the center of the Balkans. It is only partially recognized as an independent state since declaring independence from Serbia in 2008.

Kurti is an Albanian politician and activist and is the sixth prime minister of the Republic of Kosovo since the country declared its independence. He was re-elected in March 2021 after previously serving in the position in 2020.

In October 1997, Kurti caught the attention of the public as one of the leaders of the student protests in Kosovo. He later joined the Kosovo Liberation Army, making him a target of the Yugoslav police. During the NATO bombing of Yugoslavia in 1999, he was arrested and later sentenced to 15 years in prison.

Much of Kurti’s lecture Saturday focused on the ongoing conflict in Ukraine and its potential impact on the Balkan region.

For Kapllani, Russia’s invasion of Ukraine could be used as a tool to draw the West’s attention to other geopolitical tensions in the region.

“We had to have the war in Ukraine to understand that this part of the world is so crucial for Europe,” Kapllani said. ”Many times the destiny of Europe has been played in the East, rather than in the West. That’s what we want to bring here.”

Kapllani added that the event was made available not only to faculty and students, but the Albanian civilians in Chicago, and appreciates the prime minister taking time to visit Albanians outside of Kosovo to let them know what is happening in the region.

“We want to invite students here at DePaul who are not only Albanians to come to us, but especially students who come from the region,” Kapllani said.

For students of Albanian descent, like sophomore Nazo Islamaj, Saturday’s lecture was a way to connect to her heritage. Islamaj, Kapllani’s assistant for the Hidai Eddie Bregu in the Albanian studies program, was elated to find out that a prime minister from her family’s regional homeland was coming to her school to speak.

“I’m very close to my culture,” Islamaj said. “I got to shake his hand, it was really wonderful … I have so much respect for him, [and] really admire him as a leader.”

The sold-out event held 160 seats. Doors opened at 4 p.m., and Father Jose Francisco Orozco and Kapllani gave their opening remarks. The prime minister then gave a public lecture and gave the attendees time to ask questions. Following the Q&A segment, there was a cocktail party immediately after.

Kurti’s message to DePaul students is to use the vast knowledge and resources available to actively fight injustices and perpetuate democracy.

“Whenever, wherever [there are] students who are active, democracy can strive,” Kurti said.