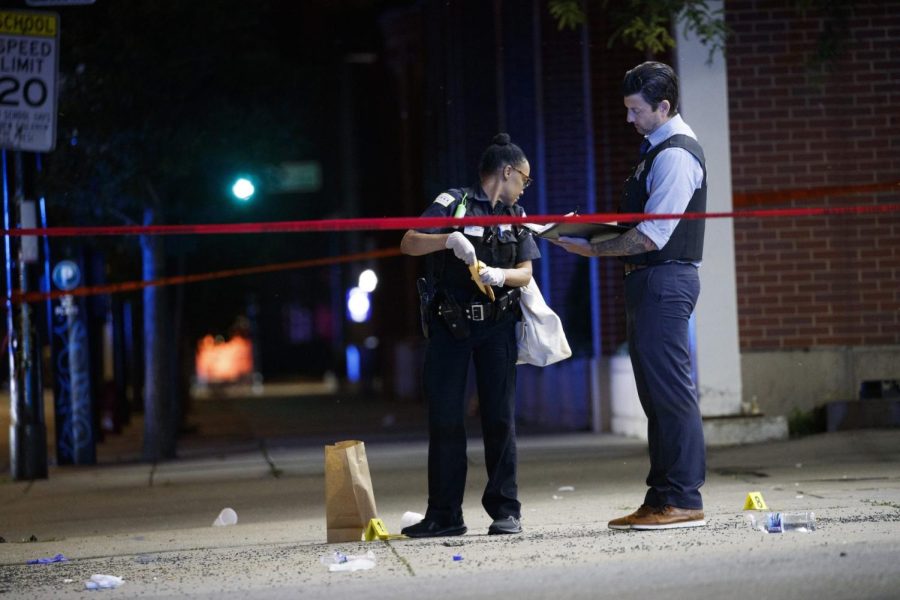 After a social media post was spread to the public about having a party involving alcohol on North Ave. Beach, police seize alcohol from party attendees ranging from 14 to 21 year olds. Armando L. Sanchez | AP Photo

Freshman Alex Guyton was sitting in his dorm room bed in the early morning hours of May 6 when a friend and fellow DePaul student FaceTimed him.

“I tried to text them and call them, and nothing was working,” Guyton said. “I started worrying, but since I didn’t know what the situation was, I didn’t want to call 911.”

The call hung up because Guyton’s friend was being held at gunpoint.

Around 3 a.m., a white sedan pulled up alongside the DePaul student on Fullerton. A passenger exited the vehicle, displayed a handgun and demanded the student’s belongings, before returning to the car and fleeing, according to the incident’s DePaul Public Safety alert.

Afterward, Guyton’s friend made it back to their dorm safe and uninjured. Since the traumatic event, each of the two students has increased concern for their own safety.

Now, Guyton and his friends often use DePaul Public Safety services when going out at night. If it is dark outside, they make a call to have a car come pick them up and take them across campus.

“Every time we want to go out, and it’s dark, even at 8:30, we take the public safety escort service,” he said. “We don’t walk anywhere at night.”

The news of this crime was alarming to SGA Executive Vice President of Operations Kellen Brown. One of his roles in his position in student government is to work closely with campus safety, but the DePaul junior says that options are limited to combat crimes that take place off-campus, even if they’re close by.

“I know [public safety is] well aware of the crimes going on right off campus,” Brown said. “But since they aren’t technically on campus, they can only do so much.”

The May 6 armed robbery of a DePaul student is just one incident in a slew of similar crimes that have recently taken place in areas near DePaul’s Lincoln Park campus.

On that same night, an armed robbery occurred at the 1100 block of Waveland in Wrigleyville, another armed robbery and battery took place at the 700 block of West Aldine, and a 23-year-old man was shot while being robbed near the intersection of Webster and Wayne, a few blocks from DePaul’s Lincoln Park campus, according to police records,. As of Sunday, the victim, Dakota Earley, remains hospitalized but has improved from being on life support last week.

Gun violence is slightly down in Chicago this year from 2021, which was the city’s most violent year since 1991. A reported 344 aggravated assaults involving a handgun occurred in Chicago in April, down from 362 a year ago, according to figures from the Chicago Data Portal. Still, significant violence has occurred near DePaul’s campuses as of late.

Saturday night was a violent one in the Loop. A 16-year-old boy was shot and killed near “the Bean” in Chicago’s millennium park at the 200 block of East Randolph Street around 7:30 p.m., according to CPD. Hours later, shots were fired one block from the DePaul Center near Adams and State, striking two men around 11:30 p.m. As of Sunday morning, one of the victims was in critical condition, while the other was reported to be in fair condition, according to reporting by ABC 7.

All of the May 6 incidents near DePaul’s Lincoln Park campus include a perpetrator stepping out of a vehicle to approach a victim on foot and the use of a gun according to police reports.

At the meeting, CPD Sgt. John McCarthy, who is a part of an investigation into these incidents,  told The DePaulia there’s reason to believe the crimes – including the May 6 event with a DePaul student – are connected.

“[We believe] this is a robbery crew we have familiarity with,” McCarthy said. “We [are investigating] two persons of interest.”

No arrests have been made, but McCarthy explained to residents at Tuesday’s meeting that CPD is tracking individuals on social media and is optimistic about how the investigation is unfolding.

As far as the crime with the DePaul student as a victim on May 6, McCarthy told The DePaulia it certainly has the same m.o. as others in the area and fits some of the others’ characteristics.

Here’s where and when several other nearby crimes with common characteristics occurred:

Brown says that walking alone, especially at night, can be dangerous. Walking in a group can make it easier to stay safe and make yourself less of a target.

“If you’re out at night, you want to be in a group,” Brown said. “It makes it that much harder [for a perpetrator] to commit the kind of thing that we saw [on May 6].”

For students on campus, Brown recommends using campus public safety services as a resource to get home safe, especially at night.

In addition to the CAPS meetings, like last Tuesday’s at St. Josaphat, leaders of communities close to DePaul’s Lincoln Park campus have taken other steps to ease residents’ minds and fight back against crime.

Smith has resumed public safety walks, in which neighborhood residents walk the streets at night together in solidarity. In an email inviting residents to join the walks, Smith said, “We will not be driven by fear from walking in our neighborhood, and we will not tolerate these crimes.”

Since the traumatic event on May 6, Guyton and his friend who was robbed are now more concerned for their own safety.

Now, they often use DePaul Public Safety services when going out at night. If it’s dark outside, they make a call to have a car come pick them up and take them across campus.

“Every time we want to go out, and it’s dark, even at 8:30, we take the public safety escort service,” he said. “We don’t walk anywhere at night.”