‘And what about us?’ : Migrants from Chicago continue to fight for immigration reform and labor rights 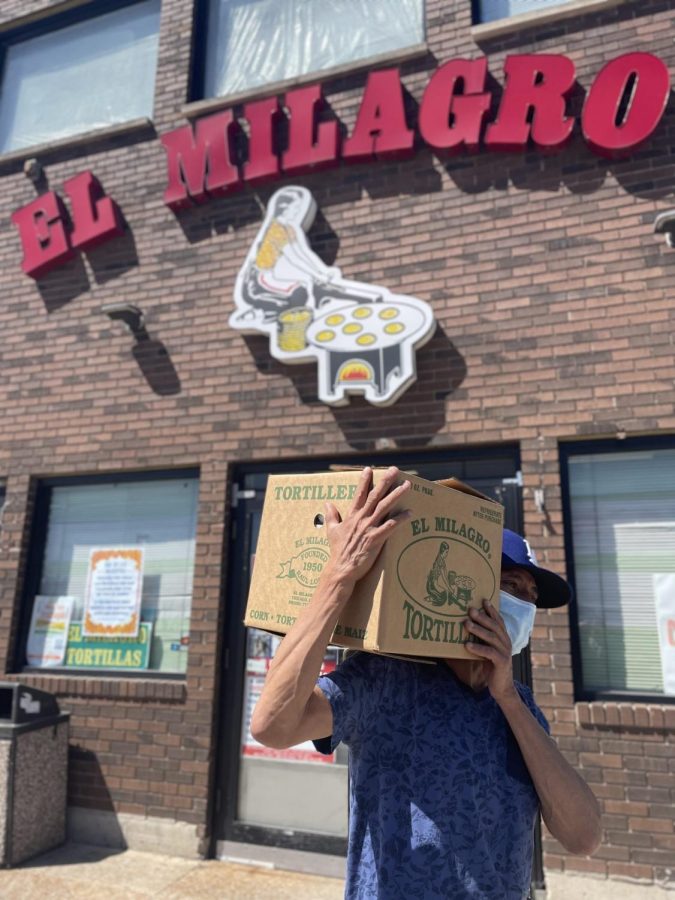 A client buys a box of tortillas from El Milagro in Little Village.

In 2006, Elvira Arellano sought refuge in a Chicago church to avoid being deported and separated from her U.S.-born son Saúl. Her story made national headlines and even made her Time magazine’s 2006 Person of the Year.

Arellano was deported in 2007 but returned to the U.S. after applying for asylum in 2014. In 2017, a U.S. immigration court granted her a stay of removal.

Today, she continues her work in defense of human rights as the founder of La Familia Latina Unida, a Chicago-based illegal immigration advocacy organization. She stood before hundreds of people and organizations in support of immigrant rights at Chicago’s 2022 May Day March from Union Park to the Haymarket Memorial.

“May Day is a day to commemorate the martyrs of Chicago and all those who have fought before us,” Arellano said. “Today we are here to rebuild our fight, not only to improve our wages and benefits, but also to continue fighting and get out of the shadows.”

Between inflation and Covid-19, Americans have faced an uphill battle to earn a living and access child care. These economic difficulties are intensified for an often overlooked segment of the workforce: undocumented immigrants.

Undocumented workers make up about four  percent of the essential U.S. workforce and 17 percent of the nation’s overall workforce, and hold a variety of low-paying and high-paying jobs, according to FWD.us. Following the onset of the pandemic, millions became susceptible to unemployment and Covid-19 infection.

“Our immigrant families were the front-line workers who kept this economy going,” Saúl Arellano said. “Many of them lost their lives. They did everything for this country. Today is the reason why we stand with them and are ready to fight for their rights.”

Last September, the workers of the El Milagro tortilla factory, one of the most popular manufacturers of tortillas across the nation, began their demonstration for safer working conditions, better wages and hours and Sundays off. They joined with the pro-immigrant and labor organization, Arise Chicago, to help defend their rights and achieve their wishes.

Prior to being endorsed by Arise Chicago, factory employees reportedly faced threats to their immigration status for participating in the demonstration, according to the Chicago Sun-Times.

“Generally speaking, no matter what kind of job they are in, workers have the right to organize and/or unionize, regardless of your documentation status,” said Jessica Cook-Qurayshi, director of the Center for Labor Education at DePaul University.

In April, workers at El Milagro and Arise Chicago announced several victories, but say they are still pushing for more changes, including having Sundays off.

Workers are no longer required to work seven days in a row and have seen improvements in the workplace, such as anti-sexual harassment training for managers and air conditioning in dining rooms, according to Block Club Chicago. They have also seen salary increases totaling more than $1 million.

La DePaulia asked Jorge Mujica, an organizer with Arise Chicago, why it is important for El Milagro workers to have Sundays off.

“El Milagro is using a really stupid excuse.They say that everyone has to work on Sundays because the public wants fresh tortillas. That is ridiculous. When do you go to the supermarket and check the date on your tortillas? You buy six packages and you freeze two, you use the rest and they last you three, four, five days. Makes no sense.”

The achievements of the El Milagro workers have inspired other workers in the city to contact and be supported by Arise Chicago.

“We are all essential workers and therefore we must fight to be included,” Arellano said. “We are going on a labor strike for immigration reform. We don’t know if we’re leaving, we don’t know if we’re staying, but for now, we’re fighting. Migrants are not criminals, we are international workers.”