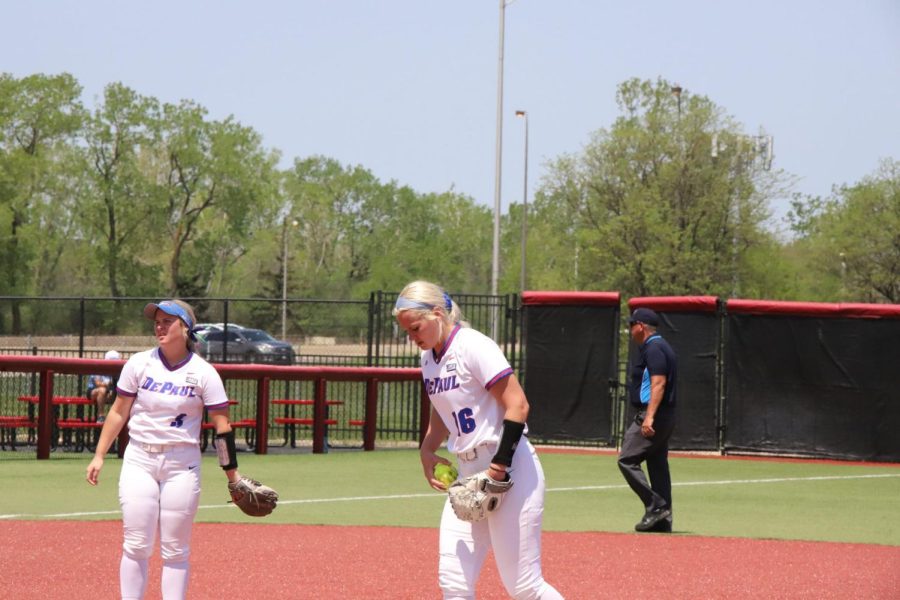 Sarah Lehman concentrated before a pitch during DePaul's 1-0 loss to Villanova on May 13.

DePaul softball’s season has come to an end after back-to-back losses to Villanova and UConn in the Big East Tournament on Friday.

However, the offense was silent for both teams, and it came down to a battle between the pitchers that extended into an extra inning, and that was all Villanova needed to open the scoring and win the game 1-0.

“We just couldn’t get that hit,” head coach Tracie Adix-Zins said. “We couldn’t get somebody to get something contagious going to pass the bat.”

Lehman worked around a one-out double and a walk in the second inning by striking out three batters to get herself out of the jam. She came back out in the third and sat down the first three with help from her defense.

Continuing her dominance, Lehman had her third shutout inning without any hits, holding Villanova through four innings with one hit and no runs. The score remained the same, as the Blue Demons and Wildcats continued to battle in a 0-0 game through four.

A display of consistent dominance has Lehman and Villanova’s pitcher Paige Rauch combined for 13 strikeouts and two hits through six innings of softball in the semi-final game.

The Blue Demons had some action in the top of the seventh with their second runner of the game on base. Graduate student left fielder Kate Palucha reached second on a fly ball which was dropped by Villanova’s right fielder. Junior reserve Grace Frazier pinch ran for Palucha but was unable to score.

After playing through the scheduled seven innings, the Blue Demons headed to extra innings. However, the Blue Demons’ usually dominant offense never gained traction when it was needed the most. On the flip side, Villanova was able to capitlize with the bases loaded in the bottom of the eighth to walk off the game.

Both pitchers were on their game today, with Lehman striking out seven batters and only letting up two hits, while Villanova’s pitcher, Rauch, had nine strikeouts and only one hit allowed.

“[Lehman] threw an absolute gem of a game,” Adix-Zins said. “You can’t ask for anything more from her on the mound.”

Because of the loss, the Blue Demons immediately faced UConn again in an elimination game on Friday afternoon.

Senior Erin Hocker got the starting pitcher role, but struggled with walks in the first inning, which UConn capitalized on. Between singles, a sac fly and Hocker walking the batter while the bases were loaded three times, UConn was able to take an early 6-0 lead.

Sophomore Julyana Gomez came in to pitch for DePaul in the second inning and was able to hold UConn back for the rest of the game. In the sixth inning, she was stuck in a bases loaded situation, but she was able to end the inning on a strikeout. Gomez finished the game with six shutout innings.

“For [Gomez] to come in and do what she did, I think she did a great job,” Adix-Zins said. “It gives me excitement for our future because she’ll be a junior next year. Knowing that she came in and shut them down, kind of faltered a little bit, but then got some big pitches and big plays behind her, so, I mean, a lot of emotions.”

DePaul’s offense finally made an appearance when a double by Johnson brought home graduate student shortstop Maranda Gutierrez for DePaul’s first run of the game and of the day. That was followed by a single from freshman catcher Anna Wohlers that Johnson scored on.

“Whenever [Johnson] is up to bat and stuff, you know it’s going to be a big at bat,” sophomore center fielder Nicole Sullivan said on May 10. “You can just tell as soon as she gets into the box that it’s going to be something big.”

In the following innings, the Blue Demons had times where they seemed like they were challenging UConn, but they were never able to fully get their offense together before UConn shut it down.

Gutierrez was also named the Big East Player of the Year for the third time. She finished the season with 46 hits and 25 runs batted in, along with a fielding percentage of .954.

“She’s an aggressive player, she’s really consistent, she’s kind of a backbone, she’s accountable,” graduate student second baseman Skylor Hilger said about Gutierrez on March 9. “I think she’s someone that you can really trust out there and you know that she expects high of you and she trusts you as well.”

The loss of graduating players like Gutierrez will leave a hole in the team, but the Blue Demons also have a lot of returning players, such as Johnson, Meyer and Wohlers, that can step in to fill those roles.