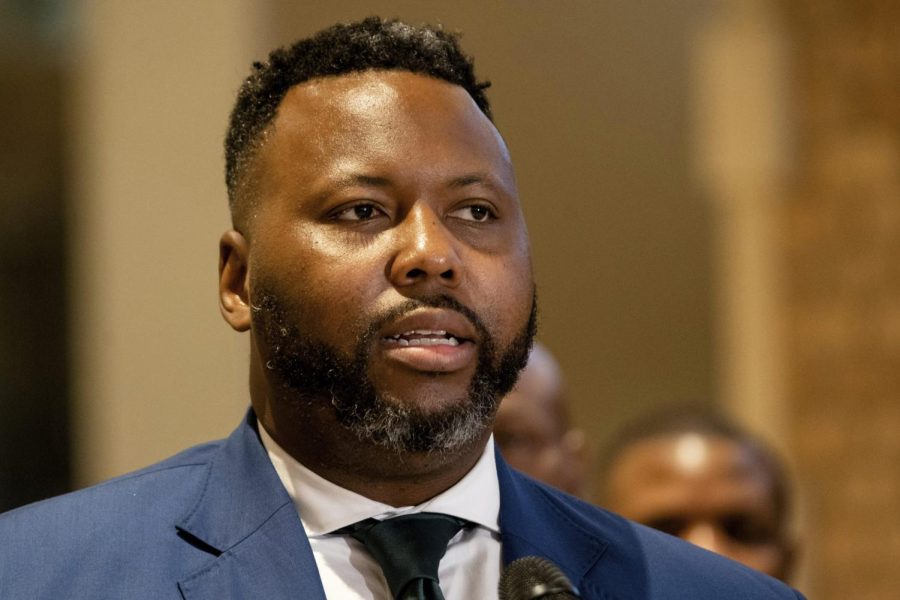 Kam Buckner is used to having his hands full.

The Democrat and Illinois state representative serves in the state’s general assembly, chairs the Legislative Black Caucus and fathered a son last year. Now, he has another task to juggle.

On May 12, Buckner declared his candidacy for next year’s Chicago mayoral election. Managing so many responsibilities might be overwhelming to some, but the DePaul Law alumnus says the key is hard work.

“Nobody’s going to outwork me,” the 37-year-old told The DePaulia over his son’s cries as he changed the 6-month-old’s diaper.

Before assuming his current position as a state representative for the 26th district in 2019, the South Side native received his law degree from DePaul in 2012. By then, Buckner already had an impressive resume, serving as an aide to U.S. Sen. Dick Durbin on Capitol Hill after graduating from the University of Illinois Urbana-Champaign, where he played football.

“When he graduated, he could’ve gone on and used his connections to get a corporate job and made a lot of money,” said Major General Charles Tucker, the former leader of DePaul College of Law’s International Human Rights Law Institute. “But here’s a guy who’s always been about… dealing with people’s issues [because] he cares about them.”

Buckner, whose mother worked as a Chicago Public Schools teacher and father as a deputy sergeant at the Cook County Sheriff’s Department, says the tenets of a public servant have been in him for as far back as he can remember. Friday marked the 10-year anniversary of Buckner’s graduation from DePaul’s College of Law, which he says is where the school instilled the value of helping others in him further.

“I grew up a lot at DePaul and learned lots about life and Vincentian values,” Buckner said. “[Things like] doing more for others and being rigorous with fighting for justice and peace.”

Now, Buckner hopes to take this fight to one of the biggest political stages in Illinois with a run for mayor.

Ald. Ray Lopez (15th) and Chicago businessman Willie Wilson have also declared themselves thus far as candidates to challenge Mayor Lori Lightfoot, who is expected to announce her reelection campaign in June, next year. All three candidates, including Buckner, have publicly disagreed with strategies Lightfoot has employed to combat various issues currently plaguing the city.

To Buckner, the root of many of Chicago’s current problems is a lack of direction from City Hall officials.

“We’ve got great people in the city… and some great opportunities,” Buckner said. “But [many] feel hamstrung because they don’t [feel] that there’s a plan.”

Buckner acknowledges that gun violence is at the top of many Chicagoans’ minds right now. The past two weeks have seen multiple shootings in Millennium Park, the shooting of an unarmed 13-year-old boy by Chicago Police on the West Side, and a mass shooting downtown on State Street.

When it comes to public safety, Buckner said he believes in community policing approaches, where precedence is placed in Chicagoan’s needs. Still, he also believes in legislation as a tool to make real impact.

Last week, Gov. J.B. Pritzker signed a “ghost gun” bill. The bill, which Buckner helped push through the House, makes Illinois the first state in the Midwest to outlaw the ownership of a gun without a serial number.

State Rep. Lamont Robinson (D-5th) co-sponsored the bill with Buckner and cited Buckner’s leadership and relational skills as to what made it possible for the bill to get through the House.

“It’s very hard to pass gun legislation,” Robinson told The DePaulia. “The NRA has a strong arm of legislators on both sides of the aisle, but because of Buckner’s relationships and his leadership skills and abilities, he was able to get the job done.”

Buckner’s entrance into the race has brought to light two DUI convictions from his past, one in 2010 and one in 2019. Buckner told WTTW that he’s learned much from the convictions and expects to face more questions about them as the campaign unfolds.

Soon after Buckner’s campaign declaration, Lightfoot’s administration already threw a punch in the state representative’s direction. A spokesperson for Lightfoot said, “Being Mayor of Chicago requires the sort of toughness that Kam Buckner hasn’t shown in his public life,” according to the Chicago Tribune,

Buckner didn’t flinch when given an opportunity to respond to those questioning his toughness.

“I’m from the South Side of Chicago, and where I’m from, we don’t have to talk about how tough we are,” the 6-foot-3, former Big Ten defensive lineman said to The DePaulia. “You can see it in the work that we do.”

As Buckner’s former educator, Tucker sees his compassion for others, coupled with his pragmatic approach to governance, as what he believes makes Buckner a good mayoral candidate.

“He genuinely cares about people and… finds practical ways to fix real-world problems,” Tucker said. “And so that’s why I support him… [He] has the ability to work within the system to make things happen.”

With more than nine months until election day on Feb. 28, 2023, Buckner’s campaign has a long road ahead and will likely face several obstacles. Yet, one place in which Buckner feels he may have the upper hand is with his ability to connect with diverse communities.

The district Buckner represents stretches from Chicago’s Gold Coast down towards the Indiana border and is home to people of all socioeconomic backgrounds. Buckner says representing the diverse district has helped him understand differing communities and is a big part of why he feels well equipped to lead the city.

“We’ve got CEOs… and folks working two or three jobs to make ends meet,” Buckner said. “It’s forced me to be very balanced in a lot of respects.”

Even with an incumbent with a historically low approval rating like Lightfoot’s, an obstacle for any challenger is name recognition, which Buckner understands will be a major focus of his campaign. But Buckner says when given a chance, he knows he’ll be able to connect with the people of Chicago.

“What they’re going to figure out very quickly once they meet me is that they’ve known me their whole life,” Buckner said. “I’m the kid that grew up in their neighborhood, went to their church, [played] in their parks… went to school with their kids.”

For Buckner, a relentless attitude on the campaign trail is key to making his message known and ultimately becoming the next mayor of Chicago.

“We’re going to be everywhere,” Buckner said. “We want to talk to everybody.”