The guide to easy biking in Chicago 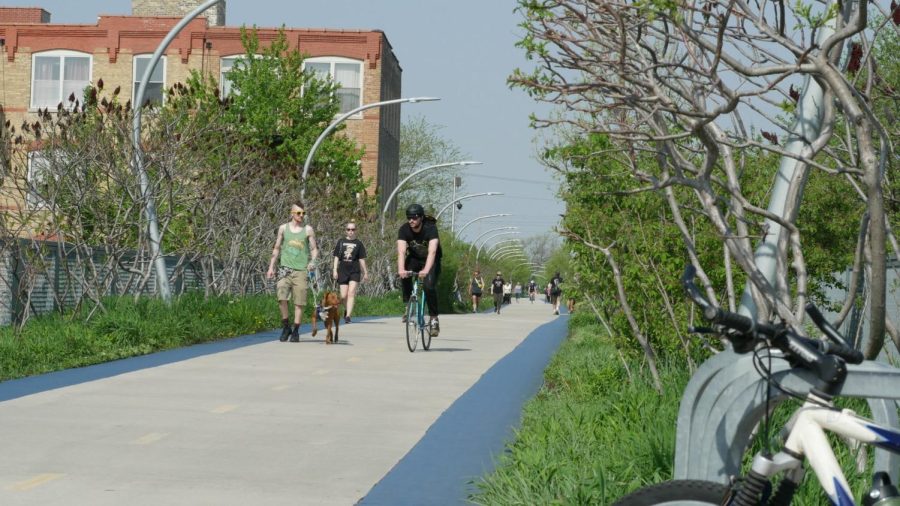 A man on his bike passes pedestrians on the 606 Trail.

Although there are plenty of stories on the dangers of biking Chicago’s streets, biking in the city can be a relaxing and convenient way to travel. Still, there are a few different things to consider before biking for the first time. Consider this a guide to making biking easy.

An easy biker is someone who probably isn’t trying to bike more than a few miles at a time. So you don’t need to overdo it with the clothing. Compression shorts or underwear can be useful to prevent chafing.

In colder weather, dress so if you were just standing still outside, you’d want another layer or two. It’s the same principle that applies to jogging in chilly temperatures. As you move fast and engage your leg muscles, you will naturally warm up. Gloves and winter hats will also save you.

When it comes to wearing a helmet, not wearing one is only putting yourself in danger, so it’s a personal choice. And be honest with yourself, on average, how many bikers out of five do you see on the street wearing a helmet? It’s not as common as it probably should be. But, if you’d wear a seatbelt, why would you not wear a helmet? There’s not much to protect you on a bike.

On your bike, a light is a must if you do any riding after sunset. One on the back that can switch between red and white light is best. You need to be seen at night — obviously don’t strap the Bat Signal to your bike, but be seen. You should wear reflective gear if possible.

I’ll start by saying where you should never bike: the sidewalk. There are two scenarios where you should ride on a sidewalk: you are a toddler on a tricycle, or you are escaping the Temple of Doom. If you’re learning, go to one of the many paved alleys in the city.

Obviously, it’s more dangerous to bike on roads with no designated lanes, but danger still looms anywhere you share the road with cars. The best biking in the city is during non-busy times on the 606 Trail and the Lakefront Trail. If you’re not familiar, the 606 Trail runs in line with Bloomingdale Avenue from Wicker Park to Humboldt Park. It’s an elevated trail with designated bike and walking lanes.

First off, I like this trail because it reminds me of the cycling road from “Pokemon Platinum.” I always thought the idea of an elevated bike trail was awesome, and my beliefs were confirmed when I rode the trail the first time. At just 5.4 miles roundtrip, it’s perfect for the easy biker.

The Lakefront Trail is particularly bad on a very busy day. Other pedestrians don’t really care about the bike lane and there’s guys living out their Tour De France dream disgruntled that the trail isn’t empty with everyone cheering them on from the sides. If you want to minimize headache, go on a weekday (and wear a helmet). Regardless, the views and length can’t be beat — you have to use this trail as a city biker.

Sharing the road with Cars

The Hatfields and McCoys, Montagues and Capulets, the Celtics and the Lakers — whatever you can analogize it to, bikers and drivers are natural enemies. Many God-fearing, never tell a lie people have envisioned mowing down the cyclist slowing down the entire lane of traffic. And cyclists (like me) often wonder how satisfying it could be to slide a key across the paint of the Cadillac that nearly put us in a hearse truck.

I’m not sure where I side in the bikes vs. cars debacle. I tend to believe Chicago is far too congested with cars, but also would prefer the current state over car-zoos like Houston or Atlanta. Many cyclists also play victim, but continuously blow through stop signs and red lights, or just throw themselves into the lane with a prayer.

My best advice is to find the middle ground between aggression and passiveness. You need to command the space that you are owed. If you’re in a bike lane, stay right in the middle of it. On a two-lane street, stick closer to the parked cars and don’t stop traffic behind you, but be wary of car doors opening to your side.

Other than that, know that there is a population of drivers who assume that you’ll blow a stop sign. This doesn’t mean you should. Stopping and signaling which direction you are going in will lead to fewer incidents.

There are some resources for bikers. The city has a map of all streets with bike lanes. The Chicago Reader also compiled the “Mellow Chicago Bike Map,” which is very on-brand for the idea of the easy biker.

So get out there, and try not to get hit!