Alumni conflicted over not being invited back for ceremony 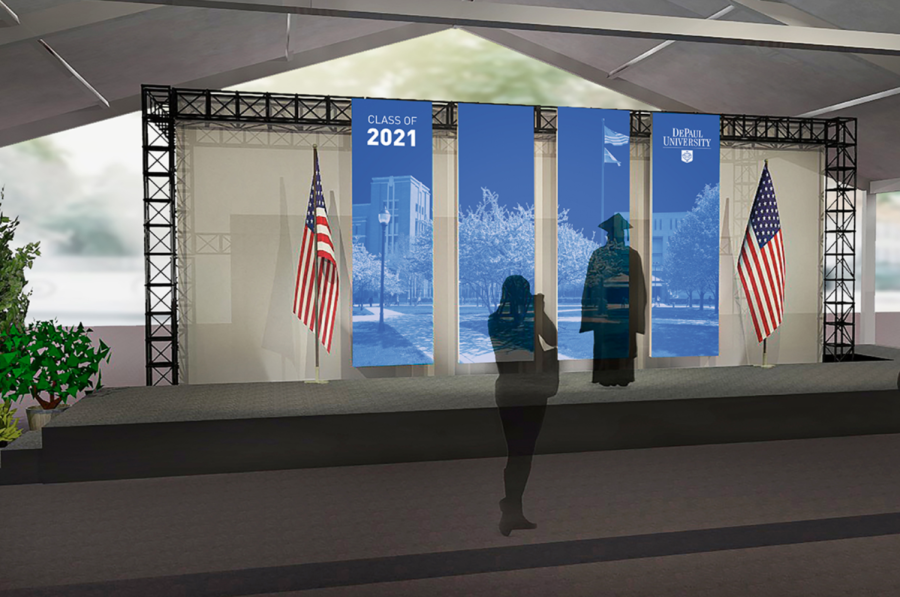 For the past two years, Wintrust Arena has stayed silent during June. Families have been unable to anxiously await seeing their loved one walk across the stage in a symbolic act of completing the past four years. This summer will be the first time students will celebrate their achievements.

Some alumni will never have the opportunity to commemorate their college years.

DePaul will not invite 2020 or 2021 graduates back for the 2022 commencement ceremony due to a lack of interest from alumni, according to President A. Gabriel Esteban.

In an interview with The DePaulia, Esteban said that the university had reserved Wintrust Arena for a couple of days in June 2021 for a potential commencement. It was canceled after the administration gathered feedback from alumni via surveys that there wasn’t enough enthusiasm, according to Esteban.

“The Provost did surveys, they looked at who might come back might not,” Esteban told The DePaulia on May 3. “It was recommended to me that no, there wasn’t sufficient interest in proceeding. So that decision was made.”

For 2021 graduates, there was a virtual ceremony and several in person events over the course of ten days hosted by the university. Graduates could only bring two guests, as opposed to the six guests for in -person ceremony, according to Newsline. There was only a virtual ceremony for 2020 graduates.

“​​I certainly appreciated that they were trying to do something,” alumna Rachel Rudolph said. “I didn’t personally attend because it wasn’t a graduation ceremony.”

Last year, the university decided not to hold an in-person ceremony in February. Covid-19 vaccines were not widely available and masks were recommended indoors, according to the American Journal of Managed Care. In May 2021, vaccines became available for the public, including college students, according to the White House.

“From a safety standpoint, in terms of last year, I completely understand that reasoning,” Rudolph said. “I was personally frustrated because a lot of other universities and schools [were] able to organize outdoor ceremonies, they were able to make something happen.”

Neighboring schools, like University of Illinois at Chicago, were able to have an in-person ceremony in June.

DePaul’s administration paid attention to what other schools were doing to see if they could mimic them.

Rudolph felt like DePaul’s efforts were lackluster compared to other universities.

“It was just frustrating that so many schools were putting in so much effort to make it happen or make something happen no matter what,” she said.

Alumna Charlie Carey did not expect DePaul to pivot from their decision. She was unaware they considered inviting graduates back.

“I expected nothing from DePaul after they made our commencement a powerpoint presentation on YouTube,” Carey said. “I didn’t even know that was an option.”

“They said that they were planning to invite us back in the future,” she said. “So the news that there was a lack of interest is pretty shocking to me.”

Not all alumni received the survey about graduation, as Rudolph did not receive the survey. Other students confirmed not receiving an email from the Provost..

“It seems kind of unfair to say that there’s a lack of interest when there’s not really a way presented for us to express our interest in the first place,” Rudolph said.

Graduation would have symbolized their achievement after four years, Carey said.

“It would have been nice to have our graduations celebrated in one way, especially for people like me who are the first grandkids to be graduating,” she said.

For some alumni, a ceremony is trivial. Alumna Jillian Morrison appreciated the mini events and thought it was a great effort from the university.

“I’m not interested in sitting next to people I don’t know while listening to generic speeches,” she said. “I understand how for other people and their families it’s a much bigger deal.”

Carey was one of those students where a ceremony would have symbolized the first grandchild to graduate in her family. However, the ceremony wasn’t the only thing she missed out on. A year of virtual learning meant missing out on the little things. A ceremony a year after felt insignificant.

“It’s been another year since I’ve moved on,” she said. “It would feel a little awkward or regressing to be ‘graduating’ a year later.”

When looking back at her college graduation, Rudolph won’t have memories of walking across the stage. Instead, her aunt’s words will stand out.

“We watched the virtual graduation and at one point my aunt leaned over to me on the couch and said, ‘This feels like an advertisement for DePaul, not a graduation.’”