Community organizers come together to envision construction of 63rd House 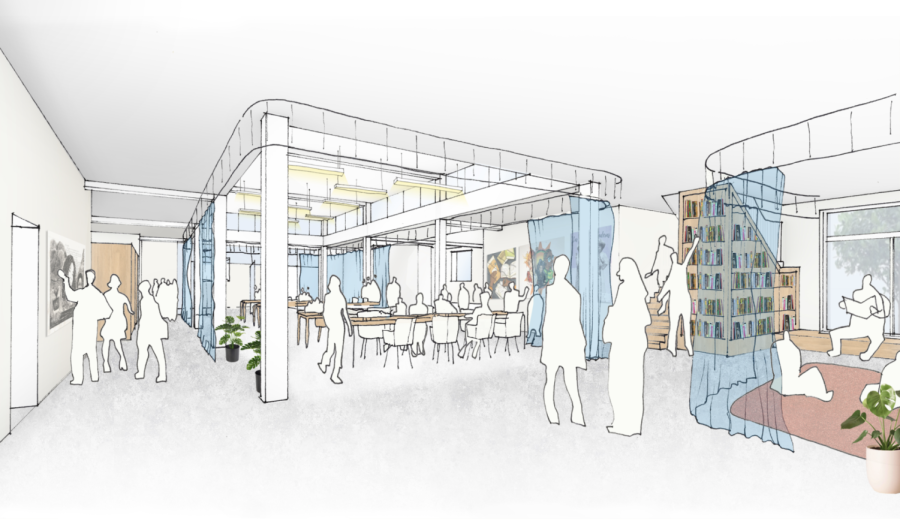 The 63rd House will be a multi-purpose space serving the Chicago Lawn community. The building will include a small library, art gallery, garden and more.

A few summers ago, community organizers at Southwest Organizing Project (SWOP) gathered around a vacant parking lot in Chicago Lawn, and brought in plant beds, stools and laid down wood chips in efforts to reactivate the space.

As Jasmine Serrano, the health organizer at SWOP, picked up pieces of garbage around the lot, she remembers people from the neighborhood telling her angrily to leave because they thought she was trying to tow their cars.

Serrano explained that her intention was not to entrench in their area, but to create a common space for the community. As the interaction simmered, a woman who lived on the block came close to Serrano and said:

“Wow, it’s about time somebody did something for us.”

Left astounded by her comment, Serrano felt it demonstrated the lack of agency people felt in their own neighborhood. To Serrano, this woman is the most powerful person on the block.

“Who’s more powerful than someone who lives there and owns a home and whose kids go to school here?” Serrano said. “She saw that she had none. And so, it’s that kind of thinking that I think needs to be agitated, and now, she wasn’t wrong for thinking that. But it’s just a deep wish of mine that people understood their power.”

Helping restore a sense of autonomy to Chicago neighborhood children, teenagers and adults, is a common value that brought community organizers like Hoda Katebi, Jasmine Serrano, Timmy Châu and Devonta Boston together in envisioning the construction of the 63rd House.

The 63rd house will be a multi-functional community space and manufacturing studio in Chicago Lawn. It will encapsulate the common goals each community organizer wishes to achieve. The idea to construct the house was initiated by Hoda Katebi, the owner of Blue Tin Production, an apparel manufacturing company that aims to abolish the exploitation of workers in sweatshops and unethical clothing production.

The location of the 11,250 square feet building also has deep historical significance, it is just blocks away from where Martin Luther King Jr. was assaulted while marching through the neighborhood to desegregate housing in 1966.

Constructing the house on 3055 West 63rd Street was also a natural choice for Katebi because most of Blue Tin’s members and other organizers live in the city’s South and Southwest sides.

“It was one of the few neighborhoods that we were looking at just because of that’s who we were,” Katebi said.

The 63rd house will include a co-working space for youth and organizers after school, a small library, an art gallery space, a meditation room, a rooftop garden, office spaces and more.

The organizers met through mutual friends, eventually linking them to a larger web of community organizations.

Devonta Boston, the founder of TGiMovement, a community organization that started at Gage Park High School in 2014 to provide youth entrepreneurship knowledge and educational resources, connected Katebi to Serrano’s work at SWOP.

“We often know a good thing when we see it,” Serrano said about the 63rd House.

Boston’s personal attraction to Blue Tin Production’s construction of the 63rd house sparked after the launch of his 2020 Reclaiming The Hood Campaign. The campaign raised money for Black and Brown businesses owners to encourage conversation around generational wealth within the community that he knew “63rd house aligned with that moment and mission.

Meanwhile, Timmy Châu is the managing director of Prison + Neighborhood Arts/Education Project (PNAP), an organization that focuses on teaching incarcerated students at Statesville Maximum Security Prison visual arts, creative writing, political theory, history and more. PNAP’s mission to bring art education to these communities influenced the addition of an art gallery that will be a part of the 63rd house.

“We’re both organizations that are committed to really following and developing the leadership of folks who are most impacted by the issues we’re trying to challenge,” Châu said.

is as a part of a larger mission to start actively imagining the world current and future communities want to live in.

“For it to exist at all is one thing but for it to be ran and led by folks from the neighborhood, I think is really impactful for people who live here, to be able to see themselves in the development of their own community” Serrano said.

“In the name of you know, of justice or liberation that we might never taste, this [63rd house] allows us to pass the torch,” Katebi said.

Around 2.2 million dollars have been raised for the 63rd house, according to Katebi. She hopes to start construction over the summer and have the building finished within the next year and a half.