Increase of water rescues are on the horizon 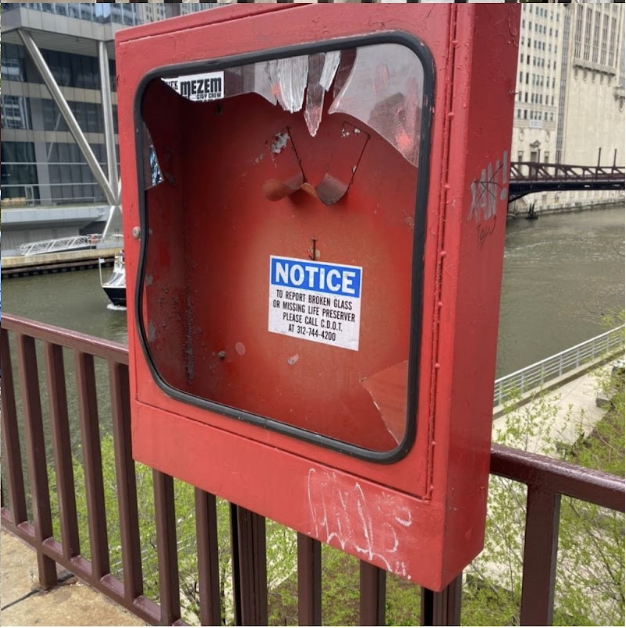 Grant Dean punched the glass barrier on the life preserver in a matter of seconds on Apr. 28.

The weather is getting warmer, attracting Chicagoans to the water. While people enjoy the lakefront, there is a darker side to the summer as it’s the highest water rescue season in Chicago.

Rescues are starting to go up as more Chicagoans are near the water.

“I think the public should know that Lake Michigan, as beautiful as it is, people can enjoy it at the same time and know how dangerous it can be,” Chicago Police Marine Sergeant Mark Walsh said.

Walsh said the number of people pulled or rescued from the water varies depending on the time of year and weather conditions.

That number does not reflect the actual drowning victims.

Twenty-five-year-old Grant Dean experienced a surprise rescue. He punched open a glass life ring box with his hand and tossed it to the man who was struggling in the Chicago River along Randolph St.on April 28 — in 45 degree Fahrenheit weather.

“It was super scary and I didn’t know what to do,” Dean said.

Dean said Chicago’s First Lady Cruises’ Emerald Lady, was in the water at the same time, but they weren’t able to back up fast enough to rescue the man.

Dean said no one was walking or acting fast enough to help.

That’s when he had to punch the glass life ring open, throw it and get the guy into the ring.

“A few of us lifted the ring up onto the river tour boat,” he said.

Emerald Lady’s boat called the police for rescue assistance when they saw the man in the river.

“The river cop boats were able to speed up and get him off Emerald Lady,” Dean said.

Chicago Police Department Marine unit M7 received the call and transferred him off the boat.

The Marine Unit is made up of 30 police officers who cover three shifts seven days a week. Sometimes they don’t have enough officers to respond quickly.

“We do our best, but more resources out there means a safer environment for the public,” Walsh said.

There have been about 12 possible drowning deaths in the Great Lake in 2022 with six being in Lake Michigan, according to the National Drowning Prevention Alliance. Walsh said most drowning victims are accidental deaths.

“When we recover a person from the water we try to preserve any kind of evidence we can to help the detectives determine the cause of death,” he said.

Walsh went on to say several boating accidents occur during the summer.

“Most are minor however we have had boating accidents that have had fatalities, most are alcohol related,” he said.

“He did the right thing in helping that person,” she said. “You are exactly where you need to be at any given moment. Had he left for the train 19 minutes earlier or later, he wouldn’t have been around to help.”

What compelled Grant Dean to stop that day was because it was so cold out.

“The part in the city, and the timing of it, right before Ogilvie train station,” he said. “It was super quiet. Not many people around, which made it scary.”

Walsh said reasons vary as to why people jump in the water. During the summer,Chicagoans may be intoxicated near the water; there are  also mental health related issues.

“People will also jump in to attempt suicide,” he said. “The public often will not hear of this because the news media usually will not report it.”

Dean didn’t think the fall was accidental due to the way it was in the river. Some people try to commit suicide by jumping into water, so much so that bridges like the DuSable Bridge, otherwise known as the “Bridge of Sighs,” on the Chicago River is known for people attempting to commit suicide.

“He had to have purposely gone in that part,” Dean said. “He could have died of hypothermia.”

Walsh said the scariest part of their job is facing the waves in a time crunch to rescue somebody.

“I feel it’s when you have to go out on the boat on Lake Michigan when the waves are 10-12 feet high to rescue someone,” he said.

Dean said he never saw the man or learned who he was.

“That’s the thing I started crying about,” Dean said. “Because I had no idea why he was there, who he was, and I don’t think I’ll ever find out.”

Dean said he wants to know who the person he saved was so he can know if they are okay and what led them to being in the water.

“It was just crazy,” said Dean. “It all happened so fast. The frustrating part is I don’t know who he is. Not frustrating. It’s just like I’ll never know. He never said anything. I think he was just in total shock.”

Many enjoy time on water with friends, family, and for relaxation but boating incidents are to be expected and watched out for as people come to Chicago’s beaches.

“The most rewarding part of my job is when we are diving and find a drowning victim that has been missing for days,” Walsh said. “So we can give the family of the victim some closure.”