78,000 pounds of infant formula arrives in US as shortage continues 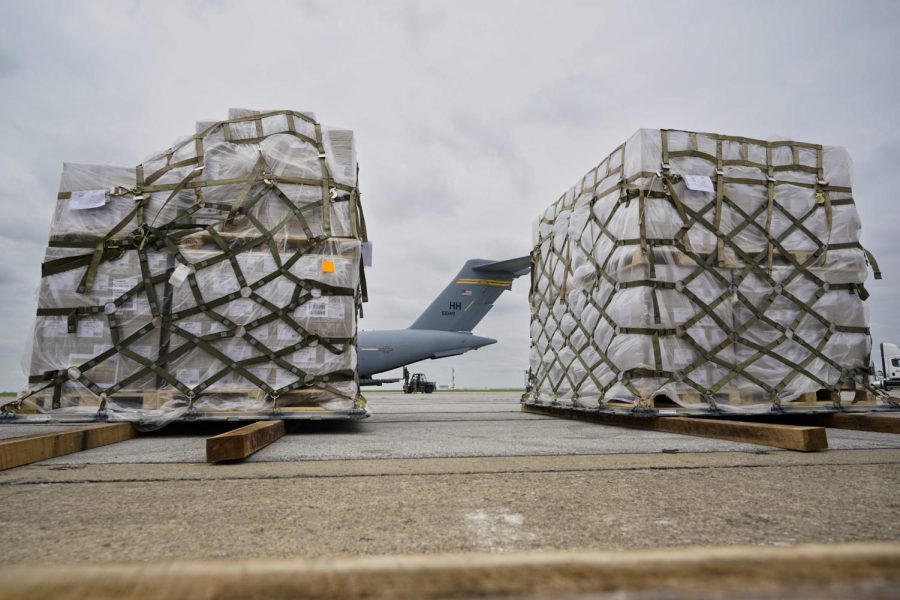 Pallets of baby formula wait to be transferred to a truck after arriving on an Air Force C-17 at the Indianapolis International Airport in Indianapolis, Sunday, May 22, 2022. The 132 pallets of Nestlé Health Science Alfamino Infant and Alfamino Junior formula arrived from Ramstein Air Base in Germany. (AP Photo/Michael Conroy)

78,000 pounds of specialty infant formula — enough to fill more than 500,000 baby bottles — arrived in Indianapolis Sunday. The first of several planned shipments from Europe to the United States in an attempt to address a nationwide shortage  leaves families struggling to feed their children.

Director of the White House National Economic Council told CNN’s “State of the Union” Sunday that the flight will provide 15 percent of much needed specialty medical grade formula, and that parents should expect an increase in available formula “as early as this week.”

About 1.5 million eight-ounce bottles of Nestle Health Science Alfamino Infant, Alfamino Junior and Gerber Good Start Extensive HA formula are expected to reach the U.S. this week, according to the White House. All three formulas are hypoallergenic for children with cow’s milk protein allergies.

Indianapolis was chosen as the destination for these shipments as the city is a major Nestle distribution hub. According to an administration official on site, the formula will travel on FedEx semi-tractor-trailers to a Nestle distribution center, where it will undergo standard quality control checks before disseminating the formula to pharmacies, hospitals and doctor’s offices.

“We have significantly increased the amount of our formulas available to consumers by ramping up production and accelerating general product availability to retailers and online, as well as through hospitals and home health care for those most vulnerable,” Nestle said in a release.

Operation Fly Formula authorizes the Department of Agriculture and the Department of Health and Human Services to obtain infant formula overseas that meets U.S. health and safety standards in order to increase product on shelves, according to the USDA.

The Biden administration has struggled to address the nationwide formula shortage. The crisis follows the closure of an Abbot formula manufacturing plant tied to several infant hospitalizations, including two deaths.

Deese told CNN Sunday that the U.S. needs to increase the number of formula providers “so that no individual company has this much control over supply chains.”