Softball junior leads team on and off the field 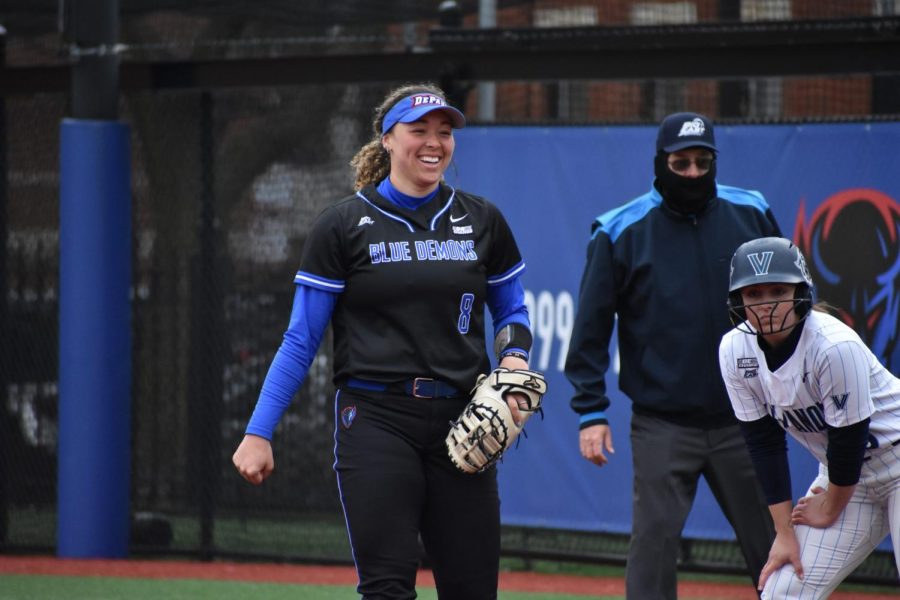 In sports, leadership and the support for teammates are contagious, whether that is off or on the playing field.

Johnson is from Chino Hills, California, just 34 miles west of Los Angeles. Her decision to come to DePaul was an easy one, which  involved past experiences with Chicago’s winters.

“[Chicago is] definitely different, it took me a while [to adjust] but I have family actually that lives in Illinois,” Johnson said. “So I’ve been here and experienced the weather, so I was not too surprised, but it is still really cold compared to California. Playing in cold weather was hard, my freshman year during winter was a big change, but this year I got used to it.”

Having family members who live in Illinois was not her only connection to DePaul — both of her parents are Blue Demon alumni. Perry and Christy Johnson have helped with their daughter’s transition to DePaul. Christy is a former softball player herself and Johnson’s cousin, Brianna Viles, played for coach Tracie Adix-Zins as a senior in 2018 when the new coaching staff took over.

Since arriving at DePaul, Johnson has established herself at first base and has made major contributions while batting third in the lineup. This past season, she posted career highs in nearly every hitting category, with 61 hits, 52 runs batted in and 13 home runs.

Standing at 6-foot-1, Johnson is the tallest on the team. Her speed goes unnoticed for how tall she is, but her humble personality makes for fierce competitiveness.

Her batting average has improved each year. She recorded a .233 in her freshman year, a .298 in her sophomore season and she recently completed her junior season with a team high of .392. This has forced opposing pitchers to work deep into counts or intentionally walk her with a base open.

Johnson is soft-spoken, but her play on the field and leadership style speak volumes. She led the charge during the Big East Tournament on May 12-13. During the team’s 6-2 win over UConn in game one, she was involved on the defense and offensive end. She had two RBIs and reached base on nearly every plate appearance.

“I think [Johnson] is a very quiet leader,” sophomore center fielder Nicole Sullivan said. “She leads more by example than anything else. You just know that when you look at her she might not be saying it all the time, but she is always doing what we need her to do.”

Johnson has also been awarded with consecutive Big East All-Academic team scholar awards in 2020 and 2021. Her health science studies are not something she takes lightly.

For a lot of students, especially those who are a long way from home, the pandemic posed significant challenges. Getting accustomed to a new life as a student-athlete was not the easiest. Adix-Zins said living off campus may have been the best move for the players, while having support and relationships with her teammates made it much easier.

Johnson is dedicated to her studies and softball, and with one season left, the focus is to make it as best as possible, along with graduating as a health science major.

“She is an incredible student,” Adix-Zins said. “Being in the health science major — I mean, that is hard. All January and February we missed her at the dome for practices because she does her chemistry classes.”

Having already gained experience as one of the team leaders from previous seasons, her knowledge will help the next group that comes around and will fill the void lost from this season’s seniors.

“I know last year I was very much an overthinker,” Johnson said. “I think that now I realize that you have to trust yourself and just go back to the basics. I think that’s what I’ve kind of been doing this year, not overthinking and just doing what I know.”