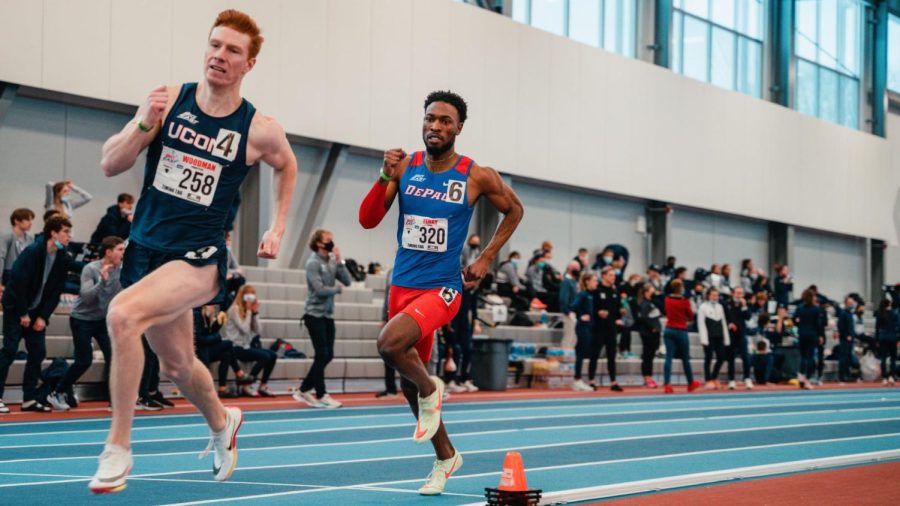 Jarel Terry races in the 400m dash preliminaries at the Big East Indoor Championship on Feb. 25, where he placed second.

After dominating at the outdoor conference championships, DePaul’s track and field team is now sending players to the NCAA West Preliminary meet this week in Fayetteville, Arkansas. Players such as freshman Darius Brown and juniors Jarel Terry and Tori Carroll, who were all recently nominated for the All-Big East Team, will be participating in the meet.

“Our team is built for the outdoor season,” Dopek said after DePaul finished in the top three at the Big East Indoor Conference Championships in April. “It’s not built for indoors, but indoor is what we do to get us to where we ultimately need to be. We just got to put in the work and when we branch out to do the other events that are outdoor specific events, I have a strong feeling that this will springboard us into it.”

With the outdoor season now complete after the team claimed four gold medals and 11 podium appearances in outdoor conference play, participants are ready and preparing to take on the next challenge.

One of the biggest accomplishments Terry wanted to fulfill was representing the school by going to the national stage in Oregon come June. He is now halfway there with a chance to take that next step against the best of the best.

Terry, who won gold for his 46.37 time in the 400m dash, will be running the same race in the upcoming meet. He is aware that he has to run a little faster than his outdoor conference time to make it to Nationals, but he is not worried about it. If anything, he is more confident than he ever was in getting the national time, which is between 45.8 and 45.9.

“Coach and I did the statistics from previous years,” Terry said. “I’m going to go out there and get it.”

For Carroll, advancing to the preliminaries validated the hard work that she has been putting in.

“It feels like a lot of the hard work that I’ve been doing is paying off,” Carroll said. “I put a lot of effort into the long jump this year so it is great to showcase that at the preliminares.”

Carroll, who won All-Big East honors for her long jump and third-place performance in the 4x100m race, will be striving to capitalize on her recent record-breaking long jump performance at the outdoor conference championships. She won the gold medal with a distance of 6.38m and broke a school record that was set in 2015. Similarly to Terry, she too wants to go to Nationals in Oregon to represent DePaul on the biggest stage, but she is more focused on executing the technique compared to getting an even longer distance than what she has jumped before.

“I’m not too focused on the distance because the goal is just to execute the technique that qualified me through now,” Carroll said.

As a freshman, Brown is making a lot of noise in the conference. He won All-Big East honors for his 110m and 400m hurdles and expressed his desire to compete again in the 110m hurdles, for which he placed second at the outdoor championships with a 14.22 running time.

“First year of college, I’m competing with people that are Olympic training,” Brown said. “To know that I’m that close means so much to me. I have so many more years to go so I have to keep improving each year.”

Despite how many individual components track and field has, it is still a team sport, and none of this year’s competitors take for granted the importance of teamwork. The whole team may not be present at the preliminary rounds, but they hold a special place in Terry, Carroll and Brown’s hearts.

“I wouldn’t be here without the support of my teammates,” Carroll said. “They push me constantly in practice so ensuring that I give my best on the day of competition is really important to me.”

Terry echoed Carroll’s sentiment, expressing that when it is time to run his event, he is going to give it his all in representation of his teammates.

“A lot of my teammates wish they were here,” Terry said. “They wish they had the opportunity, so I told them y’all can live through me because I’m going to make sure that I do the best that I can, not just for myself but for you all as well.”