‘Why will it work this time’: Chicagoans question Lightfoot’s plans to curb crime 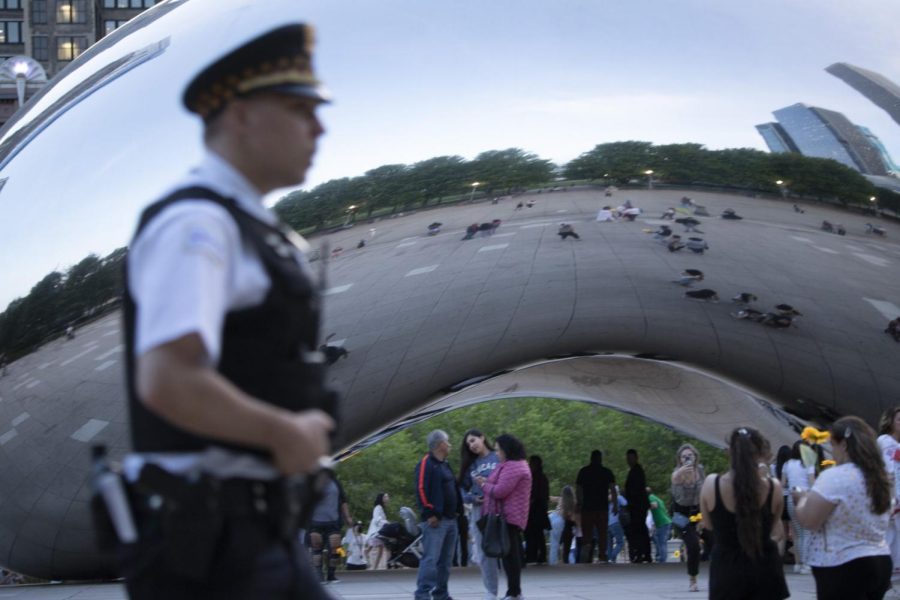 A Chicago police officer walks by the Bean in Millennium Park Thursday afternoon as visitors take photos near the attraction.

When entering Millennium Park Thursday evening, one would expect to see tourists and Chicago natives alike laughing, snapping photographs next to “The Bean,” and enjoying the summer evening. Instead, visitors were greeted by security officers, subjected to bag checks, handheld wand screening and surrounded by police officers and private security routinely surveying the park.

The downtown park, once known as a safe space for people of all ages to venture to enjoy the summer evening, is now rife with security in light of a recent shooting.

In response to the fatal shooting May 14, resulting in the death of 16-year-old Seandell Holliday, Mayor Lori Lightfoot implemented a 6 p.m. curfew for all unaccompanied minors in Millennium Park, Thursday through Saturday.

On Tuesday, Lightfoot issued an executive order to change the city’s curfew for teens from 11 p.m. to 10 p.m., which was passed by City Council’s Public Safety Committee during a meeting Friday. The new policy also extended the curfew to include 17-year-olds indefinitely, where in the previous ordinance, it only applied to minors ages 12 to 16.

“We, as a City, cannot allow any of our public spaces to become platforms for danger,” Lightfoot said in a statement addressing the shooting and new curfew. “This new policy will be strictly enforced and violations will be dealt with swiftly.”

“There is literally no evidence that curfews reduce crime,” said Edwin Yohnka to The DePaulia, the director for communications and public policy at the ACLU of Illinois. “I don’t understand the approach and it feels like just going in the wrong direction.”

Although it is not the first time increased security measures have been used in Chicago’s downtown parks, it is typically for large events and not everyday life.

“Adding security measures to Millennium Park is a way to make tourists feel safe and not to protect the people who live here,” Chicago resident Rayy Vana said.

Before the start of the pandemic, Lightfoot announced an updated security plan for Millennium Park, including bag checks and metal detectors upon entering the park, but this was only enforced during concerts and major events.

“All these [solutions] have been done years ago and none of them worked,” Yohnka said. “Why will they work this time?”

During the press conference on public safety Friday afternoon, Lightfoot said the primary cause of the recent downtown shootings is young people’s access to guns.

“That is literally what is killing us,” Lightfoot said in the statement. “Too many illegal guns readily accessible, now, to children.”

As of May 2, downtown shootings were already up 22 percent compared to the same period a year ago, according to the Chicago Sun-Times. Now, the downtown area is once again experiencing an increase in gun violence causing concern for residents and city officials about the safety of Chicago’s downtown.

On Wednesday, Illinois Governor J.B. Pritzker signed a bill banning “ghost guns” throughout the state. The bill, which outlaws guns without serial numbers, was pushed by lawmakers in hopes of curbing gun violence in Illinois.

Some Chicagoans question the effectiveness of a curfew. Curfew laws have been in place in Chicago since 1992, but research shows these laws have continuously been proven ineffective.

During Friday’s press conference, Lightfoot repeatedly referred to activists and Chicagoans’ criticism of the new curfew laws as “nonsense” because they have been implemented in Chicago for decades.

In a letter addressed to the Corporation Counsel, the ACLU presented their concerns about the new policy changes and questioned the legality of the executive order.

“We have serious legal concerns about these announced policy changes… [they] suggest an attempt to govern by press conference instead of through the democratic process and the rule of law,” the letter stated.

The ACLU told The DePaulia they have yet to receive an answer.

Yohnka argues Lightfoot’s new policy is targeting young people of color. When raucous crowds of white people gather to celebrate the victory of a Cubs game or festivals like Lollapalooza, which kicks off July 28, they are not banned from the area after 6 p.m, according to Yohnka.

“Why is this different?” Yohnka said. “The emergency that the Mayor and police Superintendent and others are saying they are addressing is because large crowds of people are gathering in a park.”

In the letter to the Corporation Counsel, the ACLU argued that when violence erupts in the South and West sides of the city, minors are not banned from being in the neighborhood after 6 p.m., but when a teen is shot downtown, City Hall takes immediate action.

“You are literally going to pull police officers off the street in communities that have suffered a rash of gun violence to protect downtown,” Yohnka said. “This is a city hall that is more interested in protecting the folks downtown than in neighborhoods across the city.”

Some are asking what effect this will have on groups who already feel marginalized by law enforcement or the city’s governmental bodies, and if they’ll take these new policies seriously.

“People are much more likely to comply with rules and policies when they believe the government is working for them, and they believe in the law itself,” said Megan Alderden, the director of the criminology program at DePaul. “Kids who are already feeling disenfranchised or who are isolated from larger society…, and who may no longer see the government working on their behalf, may be less likely to…follow those kinds of policies.”

Alderden believes implementing a policy in response to a high profile event is a temporary solution to a much larger problem. She said decreasing the spaces young people are allowed to be could be sending the wrong message to the city’s youth.

“You’re slowly removing and creating spaces that kids can actually be and that creates this sense of who is a welcome person within the city.”

In the executive order, it says the Superintendent will instruct officers to use “de-escalation and dispersal tools regularly employed to educate minors aboul curfew rules and to seek voluntary compliance.”

If a minor does not comply with the curfew, then they may be taken into custody and a parent or guardian will be notified.

Both Alderden and Yohnka believe the energy being spent on curfew enforcement could be better spent working on the relationship the police department has with citizens.

“To really get to a reduction in violence, [you must] engage in meaningful reform and accountability from the police to build that trust,” Yohnka said. “Not through these knee-jerk press conference answers.”

Yohnka said building trust with police officers and Chicago’s communities is the best way to reduce the rising crime and gun violence in the city, but Chicago has to take the necessary measures through extensive reform to build that trust.

Some Chicagoans disagree with Lightfoot’s decision to implement a new curfew for minors, believing it is a quick solution to the city’s increase in gun violence downtown, and that it will not be effective in reducing crime.

“If Lightfoot wants to meaningfully address gun violence, she can divert some of the massive CPD budget towards education, after school programs…and invest economically in the neighborhoods that are most victimized by gang violence,” Vana said. “But it’s a long-term investment and long-term investments don’t make for snappy reelection speeches.”