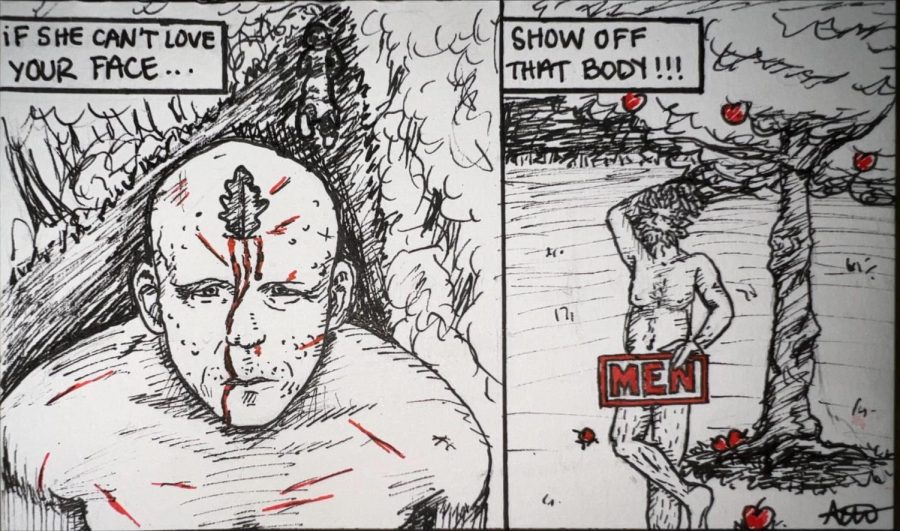 “Men” is the latest A24 horror movie with a one word title that takes itself way too seriously. While the movie has some gorgeous cinematography and stellar performances, the unsatisfactory story and metaphors leave a lot to be desired.

Alex Garland is a filmmaker that has shown a lot of promise. His two earlier movies, “Ex Machina” and “Annihilation,” were both hits with critics and audience members alike. Given his decent track record, I was moderately excited to see this movie. Unfortunately, “Men” is not nearly the same caliber as his two other movies.

The film follows Harper, played by Jessie Buckley, a woman whose husband committed suicide when she told him she wanted a divorce. To clear her mind and heal, Harper takes a vacation to the English countryside. She stays in a remote village where many of the men that live there begin to rub Harper the wrong way. After being followed by a mysterious figure while on a walk in the woods, Harper begins to fear for her life which thoroughly ruins her vacation.

One of the few favorable aspects of this movie are the performances. Buckley’s raw emotion is very compelling and believable. While I did not like this movie as a whole, I can’t fault her performance in the slightest. The other principal actor is Rory Kinnear, who plays all the men in the village. I love when actors play multiple characters in the same movie, and it is no different here. Kinnear is able to play distinctly different characters, while still keeping commonality in their unnerving nature. Without spoiling the movie, there is something off about these men and he portrays them excellently.

While I do like Kinnear’s performances, the heavy handedness of the movie’s message takes away from them. With a title like “Men” you can tell this movie is not subtle about what it is going for. While this is a horror movie, it is very clear that Garland wanted to make a movie about men’s treatment of women. As a concept, I like this a lot, but the movie falls apart with its execution.

Harper is a woman haunted by grief and guilt. Her feelings are made even worse by the men of the village. The men constantly make disparaging comments to her that blatantly lay out the theme of the movie. In one scene a priest, played by Kinnear, simultaneously tells her “men strike women sometimes” and that she is responsible for driving her husband to kill himself.

The movie is full of scenes like this. Harper is told unabashedly wrong things by these men, further making her blame herself for her ex-husband’s death. My issue with this movie’s message is from the lack of subtlety or tact when delivering this. This is most apparent by the men being played by the same actor. I believe the message here is “all men are the same and protect other men,” which is an interesting idea to have in a horror movie. It is kneecapped, like every other interesting idea in this movie, by the overt nature of the film.

This movie lacks any form of subtlety. As soon as I saw the first trailer for this months ago, I knew exactly what it was going to be. Sometimes that is fine, like for a slasher or action movie, but for a movie that wants to be seen as “elevated horror” or wants to be taken as smarter than your average horror movie, this is bad news.

I legitimately think that this concept could work, if it was written and directed by a woman. I saw this movie with two of my friends, both women, and they had just as many issues as me, if not more. The movie wants to speak to the “woman experience” but in being written by the male director, it is not able to achieve that.

When we were leaving the theater and discussing what we had just watched one of my friends said something very poignant.

“This movie gives me the same feeling as those men who claim to be feminists and talk about how much they hate men with the sole purpose of making themselves seem dateable,” said Allison Freeman.

I am giving “Men” one and a half out of five stars.