Seniors leave their mark as they prepare for life after sports 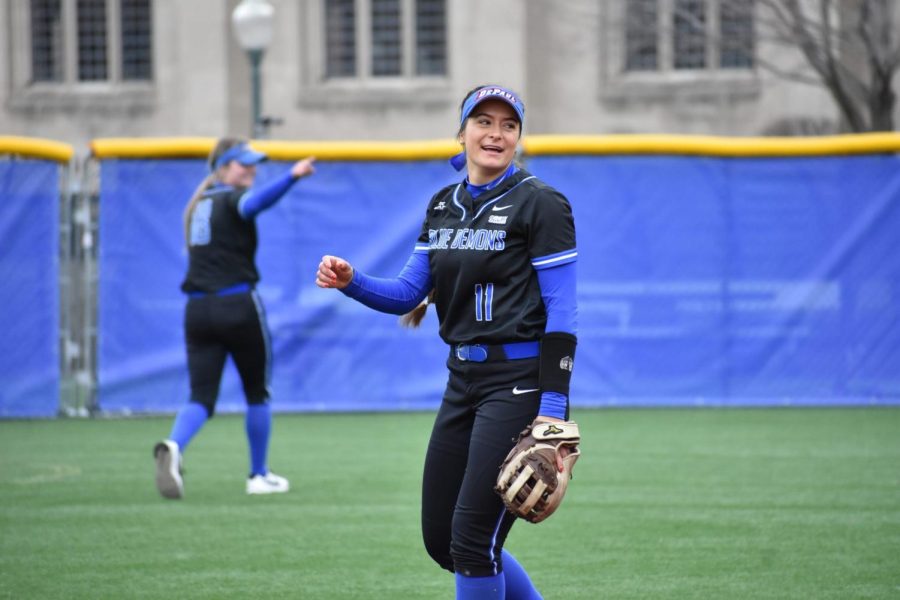 After five years of playing, two Big East Championships wins and an abundance of pre-game Spikeball games, shortstop Maranda Gutierrez and left fielder Kate Polucha are moving on from their college softball careers, but not from softball altogether. Joining them in closing this chapter of their lives are senior pitcher Erin Hocker and graduate student second baseman Skylor Hilger.

Both from Southern California, Gutierrez and Polucha were on the same travel team together in high school. According to Gutierrez, they actually visited Chicago together before they both decided to continue their education and softball careers at DePaul.

“The coaching staff was a big reason why I came here, because they just made it feel like a family,” Polucha said. “It made me feel like I was in good hands to go far away from home.”

After graduation, Gutierrez has a busy schedule ahead of her. Over the summer, she is beginning her career teaching at Factory Prep Academy back in California, an “athletics and faith-focused” school that runs from fifth to eighth grade. Gutierrez has been actively involved in Christian ministry on DePaul’s campus and is excited to continue her passions for her sport, faith-life and educating at Factory Prep.

Not only is she beginning her teaching career, but she has been training to become a longshoreman. A longshoreman is a laborious position where a person is in charge of the country’s commerce that comes and goes on ships. To prepare for this, Gutierrez has started training in lashing, the process that secures large containers in the ships, and utility tractor rig training (UTR), which refers to working with forklifts and tractors.

Gutierrez said that she is in the fifth generation of her family to be working on the port of Los Angeles in Long Beach.

Polucha, on the other hand, still has another year before transitioning from DePaul into the workforce.

“My dream goal after I graduate is to be a prison psychologist,” Polucha said. “And it’s been my dream for a couple of years now.”

Entering her second year of graduate school, she said that she is grateful to have more time to figure out what life looks like beyond college softball.

For the past year, Polucha has been doing work with Mike Lenti, the associate athletics director for facilities, and is continuing to work as the facilities assistant with Lenti next year.

Polucha played with an injury for most of the season, a source of stress and exhaustion for any athlete. Beyond her time as a player, she is looking forward to being involved with DePaul athletics in a new way.

Although Gutierrez will no longer be involved with the DePaul athletics program, she plans to stay involved with softball beyond graduating. She has been giving private softball lessons since eighth grade that she plans on continuing and said she may join a slow pitch team for leisure.

Both Polucha and Gutierrez were selected to the 2022 CoSIDA Academic All-District 5 Women’s Softball First Team. This honor is given to players based on their performances both on the field and in the classroom.

Adix-Zins went on to detail the impact Gutierrez and Polucha had on the team, as well as the other players leaving the team, Hocker and Hilger.

“Maranda is the most genuine person you’ll ever meet,” Adix-Zins said. “It is 100 percent Maranda who will get everyone into that having fun staying loose mentality.”

In addition to her impact off the field, in Gutierrez’s five years at DePaul, she was named Big East Defensive Player of the Year three times, including this year. She started in 52 games and finished the season with a fielding percentage of .954, 46 hits and stole 12 bases this season.

Hilger is in her second year of graduate school and has been with the team for six years. The longest with the team currently, Hilger had been an NFCA Scholar-Athlete for four years. This season, Hilger’s total fielding percentage was .948, while she started in 49 games and had 10 stolen bases.

“She understood the game in a different way,”Adix-Zins said. “What she provided for the team leadership-wise will be missed.”

Additionally, being a pitcher herself, Adix-Zins said she had a softer spot for pitchers like Hocker. Hocker pitched 106.2 innings and had 44 strikeouts this season.

“She gave everything she could on the mound for us,” Adix-Zins said.

When talking about Polucha, Adix-Zins explained that as a pitching coach, she gets nervous when a ball is up in the air about whether or not it will get caught. “No matter what, Kate could find that ball.”

Polucha began her college softball career strong, being named 2018 Big East Freshman of the Year. Since starting on the team, Adix-Zins said Polucha grew and provided a lot to the team in both offensive and defensive production.

“You’re going to have your teammates and coaches no matter how old you are,” Adix-Zins said. “You really do have a lifelong family to support you in any endeavor.”

“The softball team gave me a built-in set of sisters,” Gutierrez said. “They made it feel like a family.”