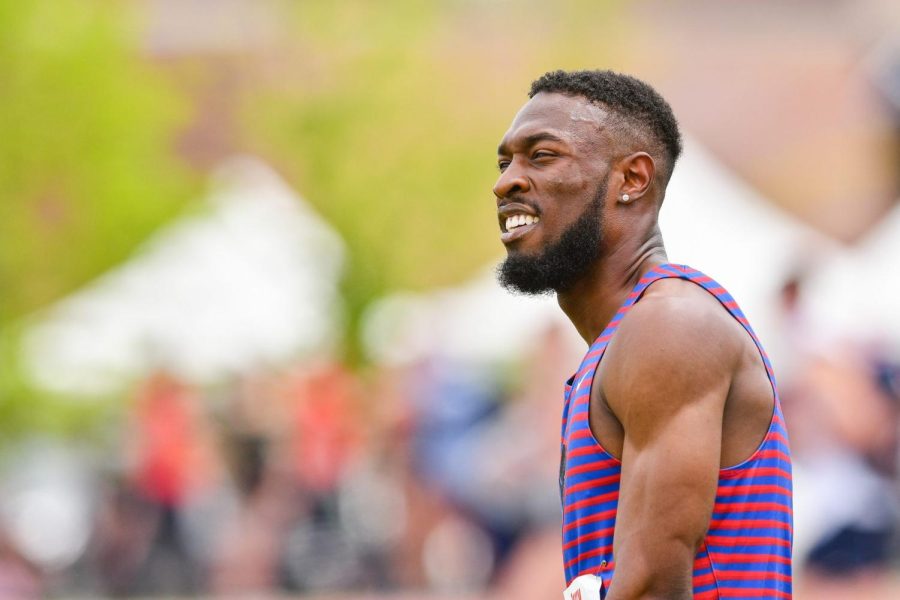 DePaul junior Jarel Terry takes a moment to look around at the Big East Outdoor Championship on May 14. Terry placed first in the 400m dash, qualifying him for the NCAA West Preliminaries.

DePaul’s track and field season has officially come to an end as the team did not qualify at the NCAA West Preliminaries on May 25-26 to advance in the next round of playoffs.

At the preliminaries, junior Jarel Terry finished 27th in the men’s 400m dash race while record holder freshman Darius Brown finished his 110m hurdles event with a time of 14.61.

On the women’s side, junior Tori Carroll finished in the top 40 with a 5.84m distance in the long jump. Junior Olivia Borowiak finished her 1500m event with a 4:25.30 time, just two seconds shy of her personal best. Her time got her a top 36 finish. Graduate student Kiersten Walker was disqualified from her event due to a lane violation.

Head coach Dave Dopek was proud of his team’s performance but believed the team is capable of doing better.

“I feel like the team did fairly well, but we were definitely capable of capitalizing on this opportunity at a much higher level,” Dopek said. “Some first time qualifiers got much needed experience at the meet, some returners missed elevating their performance, but all should be improved student athletes due to the experience.”

Even though Terry was excited to be selected to participate in the event, he knew he should have performed better. When recollecting from a team’s perspective, he noticed a difference in motivation from indoor season to outdoor season.

Brown agreed with Terry’s sentiment. He believes that in the indoor season, there was something to prove, which gave the team the necessary focus  in order to achieve their success. Although the team fell short in the outdoor season, Brown has confidence that the team can turn it around next season.

“We came up short, but everyone did put their best foot forward,” Brown said. “There are some things that we can work on. Next year we’ll be a better team. We’ll add new pieces. We won’t really lose anyone [to school eligibility or transfer] so it is time to go.”

As much as the team experienced some down moments, the Blue Demons individually did achieve some big accomplishments. With Borowiak being one of them, she recollects on the season as a whole.

“I was really happy with the season [individually],” Borowiak said. “I broke some records that were on my to-do list and I made it to regionals. Both indoor and outdoor were successful for me.”

Borowiak broke the DePaul record for the 1500m, which was a record that was held since 2004. She broke the record at the Billy Hayes Invitational with a time of 4:23.82.

Dopek had his critiques on what the team could’ve done better in the outdoor season compared to indoor season, but he was happy overall with the turnouts the team did this season.

“This season, in total, was one of success,” Dopek said. “I believe that a significant amount of work was accomplished in helping this young team grow toward being the team of the future.”

With the team preparing for next year, Dopek and the athletes are planning to use some time to rest their bodies and recover from the long season.

Brown’s goals are still to compete on the nationals stage. In order to achieve that, he plans to take two weeks off before heading back home to Louisville to begin his hardcore training.

“I want to make sure in my training that I don’t lose my form for hurdling,” Brown said. “I want to keep consistent training so that my form gets better, lift some more so I can get stronger and get off the blocks faster. It is about technique and getting stronger at this point.”

For Terry, he wants to eliminate the relapse the team experienced from a motivational perspective. He plans to be more of a leader to make sure the team always has a fire under the feet to continue with the same drive for the entire season. But more importantly to him, he wants to build his confidence.

Individually, players want to continue to strive for greatness in achieving competition on its biggest stages. However, at the end of the day, the goals are still the same for Dopek and his team: better success on and off the field. To achieve that success, the team must work hard physically/academically, improve their competitive mindset, compete hard/smart, continue the development of the ability to learn from our successes/mistakes, and focus on being better Blue Demons.

“If we accomplish these goals, we will have higher team places at the conference championships, more individual champions, more NCAA preliminary round qualifiers, and finally, the ability to have a few of our student athletes advance into future rounds,” Dopek said.