Student-athletes find the right balance to excel in the classroom 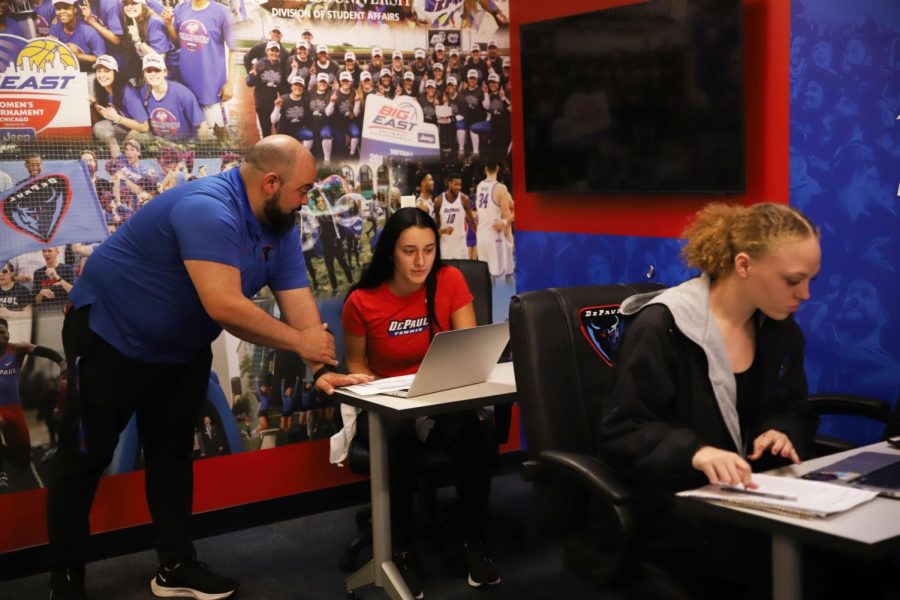 Women's tennis graduate student Marija Jovicic talks with Ben Gutman, her academic advisor, in the athletic center on May 26 while track and field junior Kiara Pauli studies in front of them.

Balancing academics with life can be tricky for anyone, but when athletics are added into the mix as well, it can make for a challenging college experience.

With many of the DePaul athletic seasons wrapping up, the student-athletes are now being honored for their academic achievements throughout the school year. Balancing academics and athletics is something that every student-athlete has to master in their career, and DePaul athletes have found that balance.

DePaul athletics has their own award — the Rev. John R. Cortelyou award — that is given to the male and female student-athlete who showed the best academic dedication and achievements. And on May 20 at The Billys awards, Michael Anderson from men’s soccer and Valentina Martin from women’s tennis took home the award for consistently having high academic accomplishments.

“This award means so much to me because it shows how welcoming the DePaul community has been to me,” Martin said. “It shows that my hard work is recognized, and it makes me happy to see that I am leaving a legacy behind while inspiring my teammates and other student-athletes.”

A junior studying business administration with a minor in management, Martin plans to go through the combined degree program to get her masters in marketing. With tennis happening in the fall, winter and spring quarters, Martin’s biggest struggle is finding time and energy for everything.

“We are constantly on the tennis court, doing conditioning, lifting weights or gone for an entire weekend for tournaments [or] season dual matches,” Martin said. “Which can be very tiring physically and mentally, resulting in not being motivated to do schoolwork but having to push through.”

To help manage her time, Martin said that she balances her busy schedule by planning out everything by day to make sure that all of her tasks and assignments are covered.

Like Martin, Anderson also said that his biggest challenge as a student-athlete is finding the time to balance everything. A junior who is studying cybersecurity in the combined degree program, Anderson’s schedule is usually full, and he has taken to scheduling out most parts of his day to make sure that every task gets completed.

“During the season, you’re just focusing on winning; outside of the season, you want to develop to make yourself better for the next year,” Anderson said. “So, it’s really just trying to find that balance of getting your schoolwork done and in time so that you can focus on athletics.”

The school and the athletic department offer many different accommodations to try and help student-athletes succeed off the field as well, Anderson said. There are study rooms and tutors available, and academic advisors that offer guidance for the entire length of a student’s college career.

Jovicic has consistently earned high grades in her classes and was named an Intercollegiate Tennis Association (ITA) Scholar-Athlete in the last four years straight while studying computer science.

“It was really great,” Jovicic said on earning the honor. “I was a little surprised, I wasn’t expecting anything like this but it’s really great to be recognized for something that’s not that widely recognized as our athletic achievements, so yeah, I’m very happy.”

The academic honors continued to flow in during the past week as the softball team had four members who were also honored as CoSida student-athletes, this time on the All-District Women’s Softball First Team. Graduate students Maranda Gutierrez and Kate Polucha, along with juniors Brooke Johnson and Tori Meyer, all received the honor for their success in academics and athletics.

“I was really happy obviously to be honored,” Meyer said. “I just prioritize school a lot before softball, and, you know, I try to excel in all aspects of life, so I always put school first.”

Meyer, who is studying psychology and sociology, said it took some time for her to figure out a routine in her freshman year, but once she did, she was able to settle in and focus on balancing academics and softball. As she grew in her career, she has also begun to mentor the younger members on the team as well.

It can be easy to forget that student-athletes, for all their prowess in their respective sports, are still students first. But at DePaul, academics are at the forefront, and in return, the athletic department offers all that it can to help the athletes succeed.

“Everyone is just here to support you,” Jovicic said. “If you have a problem, anyone will be committed to solving that problem, which is really a great support system that I’ve never experienced before. I experienced it with my parents, but now I’m here without my parents, so I’ve never felt like I’m alone and I’m left alone where I don’t know how to solve a problem.”