School shootings are a rarity in most developed countries. Why are they so prevalent in America? 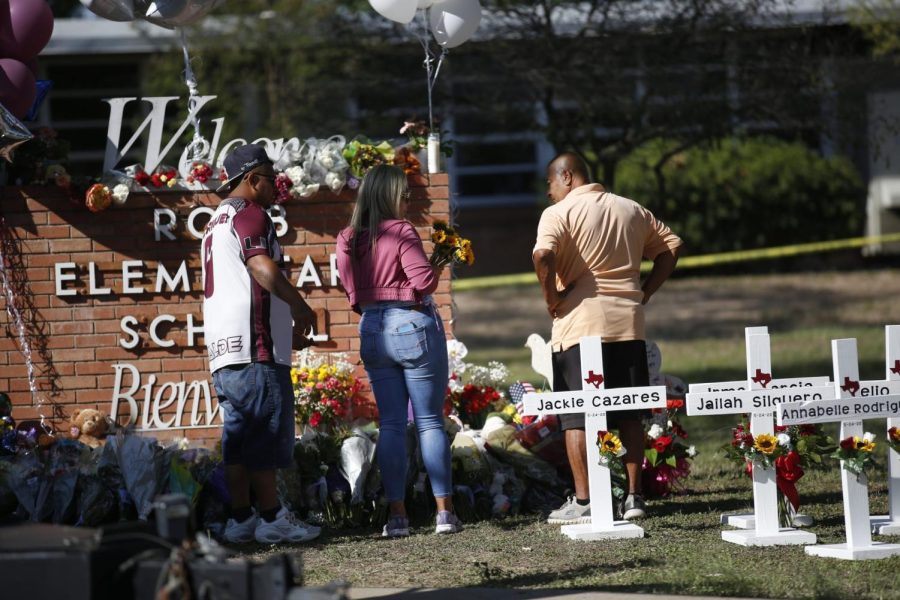 People pay their respect at a memorial set up outside of the Robb Elementary School in Uvalde, Texas Thursday, May 26, 2022. Law enforcement authorities faced questions and criticism Thursday over how much time elapsed before they stormed the Texas elementary school classroom and put a stop to the rampage by a gunman who killed 19 children and two teachers. (AP Photo/Dario Lopez-Mills)

In the wake of the mass shooting at Robb Elementary School in Uvalde, Texas that killed two teachers and 19 students aged 9 to 11, legislators, activists and the public at large are once again left wondering why tragedies like these are so unique to the United States.

According to an analysis conducted by CNN, the U.S. experienced 288 school shootings between Jan. 1, 2009 and May 21, 2018 — 57 times more than all other G7 countries combined. As a result, American children face a threat to their safety nearly absent from every other high-income country on Earth.

“Instead of [just] practicing fire drills and tornado drills or the things that are really uncontrollable in terms of natural events, our kids are practicing things that are very real and very scary — and to be honest, things that we could prevent with proper policy,” said Jocelyn Carter, associate psychology professor and director of clinical training at DePaul. “It’s a uniquely American childhood experience, unfortunately, because of the uniquely American experience with gun culture.”

Craig Klugman, a Vincent de Paul professor in bioethics and health humanities at DePaul, notes that only a few decades ago, the U.S. was not nearly as alone in its prevalence of school shootings.

“If you look at the U.K., you look at Australia — [we share] similar culture, similar historical backgrounds, similar political systems,” he said. “And like 30 years ago, each one of them had a school shooting, and in response, they put legislation that really restricted who could own a gun, made it very difficult to purchase one. So there are less guns available, and neither one has had a school shooting [since].”

For children who have been exposed to gun violence and survived, the experience can have a dramatic effect on their outlook of the world.

“It really changes the way that the brain processes information,” Carter said. “Children who have been exposed to violence or other types of [threats to] safety are likely to be really sensitive to the environment because they’re scanning the environment to look for signs of safety and signs of danger. They learn not to trust people. So instead of being able to explore the world freely, they’re thinking, because they’ve been exposed to this, that there is danger.”

The psychological impact of school shootings extends far beyond just those who have experienced them themselves, though. Carter notes that for students across the U.S., fear and anxiety can take a serious toll through what’s known as vicarious trauma.

“Vicarious trauma means that you’re seeing, learning, hearing about trauma that occurs with people that are similar in position to you,” Carter said. “So kids can put themselves in other people’s shoes and realize that ‘if this happened to someone else in another fourth grade classroom just like mine, this could happen to me as well.’”

Alex McFadden, a freshman at the University of the Arts in Philadelphia, explains how the high frequency of school shootings in the U.S. has impacted their perception of the classroom.

“It’s scary to know there isn’t anything I can do to ensure my safety in an educational environment,” they said. “The anxiety that comes with the constant news cycles of tragedy is debilitating. I think the most frustrating aspect of all of this is that we’re expected to keep going as if these issues don’t affect us in any way.”

A number of Republican figureheads, including U.S. Senator Ted Cruz (R-TX) and former President Donald Trump, have in recent days proposed “hardened schools” solutions, such as requiring schools to have only one entrance. However, Klugman suggests the implications of enacting such policies would likely be far-reaching and untenable.

Instead, Klugman suggests that in order to sufficiently address the gun crisis in the United States, policy makers must enforce preventative measures rather than simply protective ones.

“There are things we can do that work — that’s a public health approach,” Klugman said. “What we’re getting now is the sort of medical approach of, ‘It’s up to the individual. You should buy [bulletproof] backpacks. We should harden schools. We should arm every teacher. You should homeschool your child if you’re concerned about this.’ That’s individual responses to a systemic problem, and it doesn’t work.”

Public health-oriented gun reform proposals such as requiring background checks on all gun sales, creating a national database for gun sales and even banning assault-style weapons are all policies supported by a majority of Americans, according to a Morning Consult/Politico poll conducted May 25.

Despite widespread support though, no such policy has been implemented on a federal level since the Federal Assault Weapons Ban expired in 2004. Klugman suggests that the financial influence of lobbyists opposing gun control policies has played a significant role in swaying much of Congress away from the will of many of their constituents.

“It’s very expensive to run for office in the United States,” Klugman said. “So, where do you get that money? You could have small individual donors — which can add up, but [it’s] not that great — or you can have large, deep pockets. So, you could have billionaires or you can have corporations. And one of those corporations that puts a lot of money into politics is the lobbying group the NRA (National Rifle Association).”

Gun rights lobbying groups, including the NRA, spent a record $15.8 million on lobbying in 2021, according to a report from OpenSecrets. Since 1998, these organizations have spent $190 million in lobbying efforts, making it increasingly difficult in recent decades for Congress to enact any gun control legislation.

Still, Senate Minority Leader Mitch McConnell on Thursday reportedly directed Sen. John Cornyn (R-TX) to begin discussions with Democrats in an attempt to find a middle ground on gun control policies. However, Klugman is skeptical that any bipartisan solution will come from this.

“Honestly, I’m not very hopeful,” they said. “Considering the fact that Sandy Hook happened and not a lot of change has been made, I really don’t know what will compel people to pass gun legislation.”