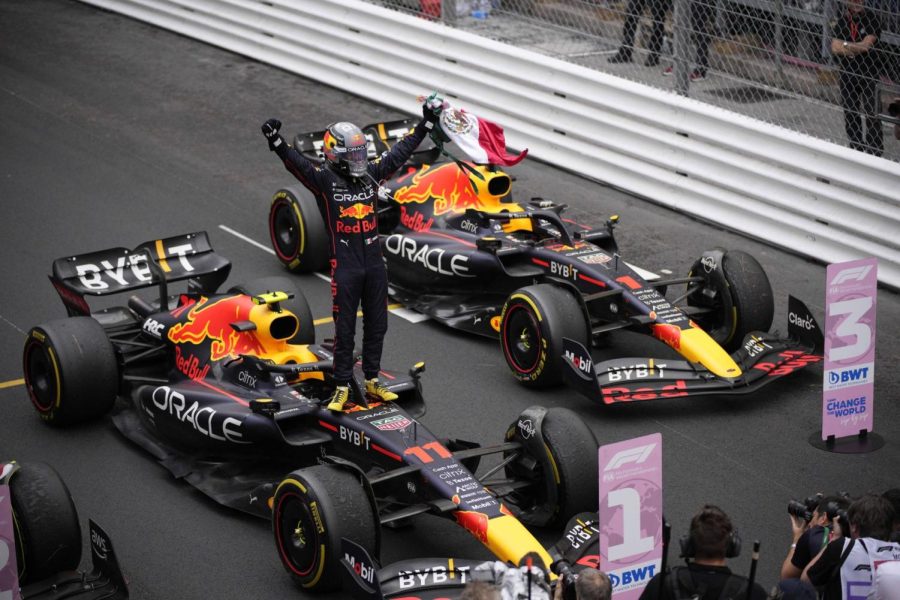 Photo courtesy of AP Photos/Daniel Cole. Sergio Perez, a Formula One driver from Mexico, stands on his car and celebrates after his win at the Monaco Formula One Grand Prix on May 29

Growing up in the U.S, when I thought of racing, my mind’s eye was drawn to the spectacle of Daytona or the blazing speed on the bricks at the Indianapolis 500. Then I lost interest. At some point between the ages of 10-17, my love of motorsport dissipated as I focused on far more important things, like my middle school baseball career and various essays. Then, slowly it came creeping back, lured towards the light as a more lucrative and flashy sport than I had ever laid eyes on.

As a child I was never exposed to the spectacle of Formula One (F1) — most likely because my parents were not in favor of footing the cable bill required, so my first encounter with the European based racing organization came in my first few weeks at DePaul.

Spurred by a lack of homework, and an over affinity for the streaming service Netflix, my first contact with the sport came in the form of the Netflix reality show Drive to Survive, which is based around the grandeur, as well as the seedy underbelly, of the sport. Not only did the show peel back the mystique of the sport, it highlighted the overwhelming talent and ingenuity of the 10 teams that make up F1.

Enamored with all aspects of F1, I began to search for it wherever I could find it. YouTube highlights of races from years ago? I promise I have watched every single recap posted. Top 10 lists counting down the best and worst of everything F1? I consumed those as if YouTube were shutting down the next day.

As I became further and further immersed in the world of F1, gobbling down each Formula One fact as if it were going out of style, I began to form my own opinions.

As I became further engrossed in the world of F1, I came to realize why I craved it so much, it had remained unblemished by American hands.

As I began to flesh out this idea, it became apparent to me how much the coverage of F1 differs from those of its American sporting counterparts. F1 coverage is relatively free of pundits such as famed ESPN instigator Stephen A. Smith and coverage of the races is not interrupted by formulaic commercial breaks every 15-20 minutes.

However, F1 coverage does include some punditry from former drivers such as Paul di Resta, Anthony Davidson and Jenson Button, names that many European motorsport fans are aware of because of their current and former achievements behind the wheel.

Included in the coverage of a race weekend are expert segments revealing the science behind the cars as well as the personalities, the coverage does not rely on the constant production of inflammatory soundbites.

What is most interesting about that is that viewers respond to expert commentary given by people who genuinely care about the ins and outs of their sport. According to formula1.com, there was an average of 70.3 million viewers for F1 races in 2021, over four times the average viewership of the NFL.

Recently, it has become increasingly apparent that the leaders at Liberty Media, the owners of F1, are trying to tap into the massive and lucrative American sports market. The first step of this was scheduling an additional race in the states, racing around Hard Rock stadium, home of the Miami Dolphins. Included in the transformation of the parking lot turned racetrack was the creation of several increasingly vapid party spots, in what can only be described as a poorly disguised money grab.

Included in this “VIP” party location was a faux beach, as well as the world’s first inland parking lot adjacent marina, complete with yachts stocked with alcohol and staff. Unfortunately, what the organizers of the event forgot was that marinas, no matter how far inland, are filled with water. A key detail that was somehow lost in the frantic rush leading up to the event.

What is so unfortunate is that this is not a phenomenon that is unique to F1. Over the years, it has become clear that the American sports scene has turned away from its purer original roots, towards a system where cash is king.

It is this American perversion of the essence of the sport that has left so many European fans, as well as American fans like me, in disgust.

So, it is with this final turn of phrase that I plead to the organizers of F1 and beg that they allow the sport of which I love so dearly, to retain the culture that I fell in love with. One where success as a team is determined by speed on the track, and ingenuity of it, as opposed to who can appeal to Americans the most.