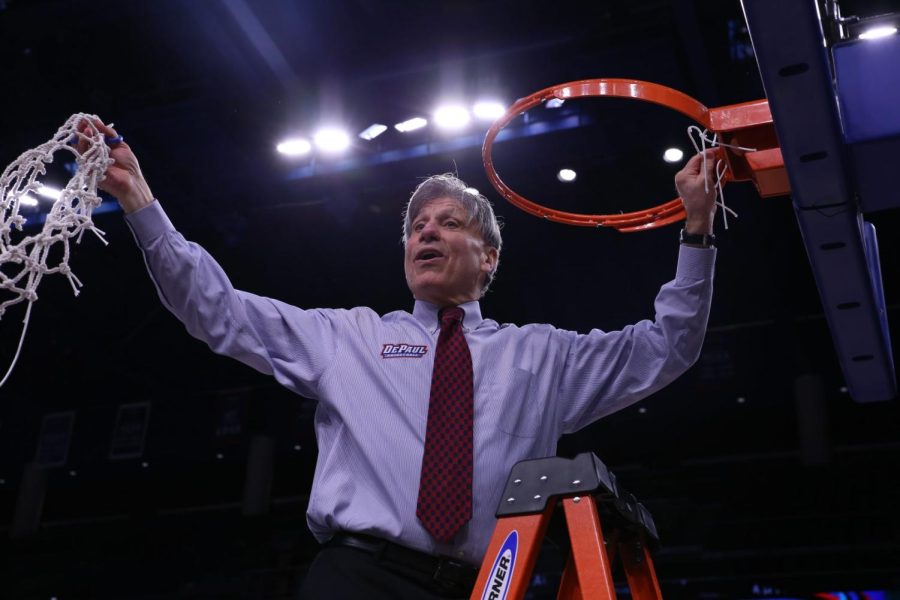 DePaul women's basketball head coach Doug Bruno holds the net in the air after the Blue Demons' 74-73 win over Marquette at the Big East Tournament at Wintrust Arena on March 12, 2019.

DePaul women’s basketball head coach Doug Bruno gets to add to his already impressive resume with recognition that extends beyond just basketball. The city of Chicago has officially designated June 11 as “Doug Bruno Day,” the same day he will be inducted into the Women’s Basketball Hall of Fame.

“I’m very thankful to the City Council and the mayor,” Bruno said. “I’m thankful for them proclaiming this day. I will always be appreciative of how this came about.”

With 36 years coaching at DePaul and 24 NCAA Tournament appearances (including a stretch of 18 straight between 2003-2020 with 2020 being an automatic berth but the tournament was canceled due to COVID), the soon-to-be hall of famer is getting city recognition for his legacy and the impact that he has made in women’s basketball. Bruno credits his success to a variety of people.

“You cannot experience success coaching in a vacuum,” Bruno said. “Our success at DePaul is a result of great administrations, great assistant coaches, great players through the years and I have a family support system with my wife Patty, six sons and 10 grandchildren who allowed me to coach other kids’ kids.”

Among the things that allude to his success are his girls’ and women’s basketball camps. Through the Doug Bruno Camps, along with other various opportunities, Bruno has been able to build relationships while being instrumental to other people’s success.

“His commitment to his student-athletes is all about the relationship piece and putting that first in everything that we do,” assistant coach Jill Pizzotti said. “When one of our players drops by the office, we stop what we are doing and turn our attention to our players. We highlight that that is the number one piece in all of this.”

Pizzotti participated in Bruno’s camps in the summers of her junior high school years and eventually got into coaching, which led to her serving as the head coach at St. Louis University. She coached against Bruno for a decade due to being in the same conference (Conference USA/C-USA) at the time.

In 2005, she switched from the sidelines to a behind the scenes role as the manager of women’s basketball sports marketing for Nike. Serving as the liaison between Nike and college basketball coaches, she looked to Bruno as a mentor that helped her with guidance in the world of women’s college basketball before she decided to join his staff at DePaul in 2011, where she has been ever since.

“I really admire his commitment to women’s basketball,” Pizzotti said. “Over the decades, I saw his commitment and dedication to growing the game and growing our sport. That is ridiculously impressive.”

Assistant coach Lisa Ryckbosch can relate to Pizzotti’s history with Bruno. She participated in Bruno’s camps throughout her college days and met him in high school playing at an All-Star game while he was coaching the Chicago Hustle at the time — a team in the WBL, the first professional women’s basketball league in the United States.

Ryckbosch stated that through that connection, Bruno helped her get recruited by Loyola-Chicago for basketball, along with other professional opportunities that led to her playing basketball in Belgium and eventually meeting her husband overseas.

After professional basketball, she took on teaching and being a high school basketball coach before ultimately reuniting with Bruno to take an assistant coaching job in 1991. She stayed for 11 years before taking the head coaching job at UIC, where she held the position for nine years before coming back to DePaul in 2011, totalling 23 years of coaching at Bruno’s side and over 30 years of work for his camps.

Knowing him for her entire adult life, one of the biggest components of Bruno’s leadership she admired was his faith in the people around him and helping them strive for something bigger than what you can see.

“He has the ability to bring out the best in people,” Ryckbosch said. “He helped me have this belief that you can strive for more and not set limits on yourself. He has always done a really good job with our players, helping them have this vision of what they can become and helping them to help themselves to get to that destination.”

Bruno has a track record of helping players be the best versions of themselves, not just on the court, but off the court. He is known for getting people to buy in on not just the end destination of their goals, but enjoying the journey to get to that point. It is a lesson Ryckbosch has learned to apply in her life, but a bigger focus that you have to admire is his impact on young women.

Currently serving as the chair of the selection committee of the U18 and U19 national teams for USA Basketball, Bruno has coached professional stars throughout his tenure such as Tamika Catchings and Candace Parker, along with thousands of women who have attended his camps. When he uses that platform to help them succeed in various ways in and out of the sport, that is where the real impact takes place.

“He has been able to impact so many women over so many different walks of life,” Ryckbosch said. “It is the biggest impact he has had not only with women’s basketball but on the world in general.”

With “Doug Bruno Day” and the Hall of Fame coming up, people can plan to celebrate his accomplishments throughout the city. However, Bruno himself has other plans.