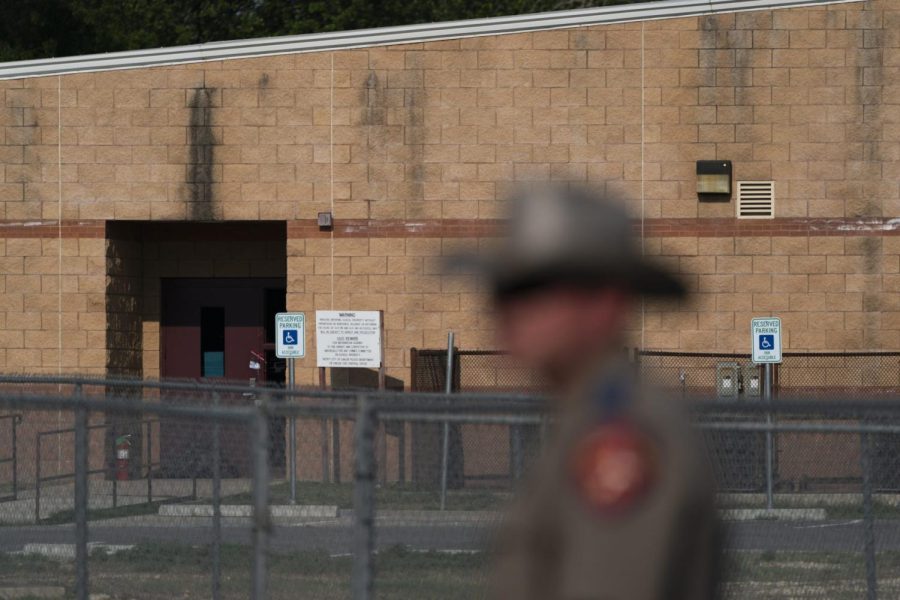 FILE - A back door at Robb Elementary School, where a gunman entered through to get into a classroom in last week's shooting, is seen in the distance in Uvalde, Texas, Monday, May 30, 2022. (AP Photo/Jae C. Hong, File)

“Lock down,” the words boomed over the school public address system, and I knew exactly what these words meant. All 20 of my classmates quietly stood up from our desks in unison and walked towards the wall that held the door in the corner. We sat down and we waited.

It was difficult for a room full of rambunctious elementary school kids to keep quiet, so occasionally hushes were issued by our teacher. We waited longer, unable to see the clock and unsure of how long we had been waiting for. The doorknob shook; the door was knocked by a school official.

What felt like forever had passed before the words “all clear” were announced on the PA system. I was 10 years old and understood all these key phrases.

Active shooter drills, commonly referred to as lockdown drills, started after the shooting at Columbine High School in 1999. Their presence would increase in schools nationwide for years to come. By 2016, three years after the shooting at Sandy Hook Elementary, 95 percent of public schools had this practice in place and ingrained into students’ minds.

Following the shooting on May 24 at Robb Elementary School in Uvalde, TX, I had a professor take five minutes out of our class time to go over some safety procedures. Every classroom at DePaul has a door jamb, typically sitting in a podium, that prevents anyone from entering through the door.

I have been at DePaul for nine months, and despite the 27 school shootings that have occurred in 2022, this was the first time this safety procedure had been communicated to me. It appeared that my classmates, many of whom were seniors, were unaware of this tool as well.

In my time at DePaul, I have never been walked through or had a discussion of procedure in the case of a fire, tornado, severe weather event or an active shooter.

Although the routine itself may seem elementary, school shootings are not limited to younger grades. Five of the 14 deadliest school shootings in the United States happened on college campuses, according to AP.

The violence extends beyond schools, but also our campus’ location. In Chicago, there have been 971 shootings only five months into 2022.

Regardless of what you think about gun legislation, it is clear that students are at risk across the nation. It is urgent that DePaul increases their safety procedures and communicates to students what must be done in emergency situations.