DeWayne Peevy reflects on beginning of his DePaul career 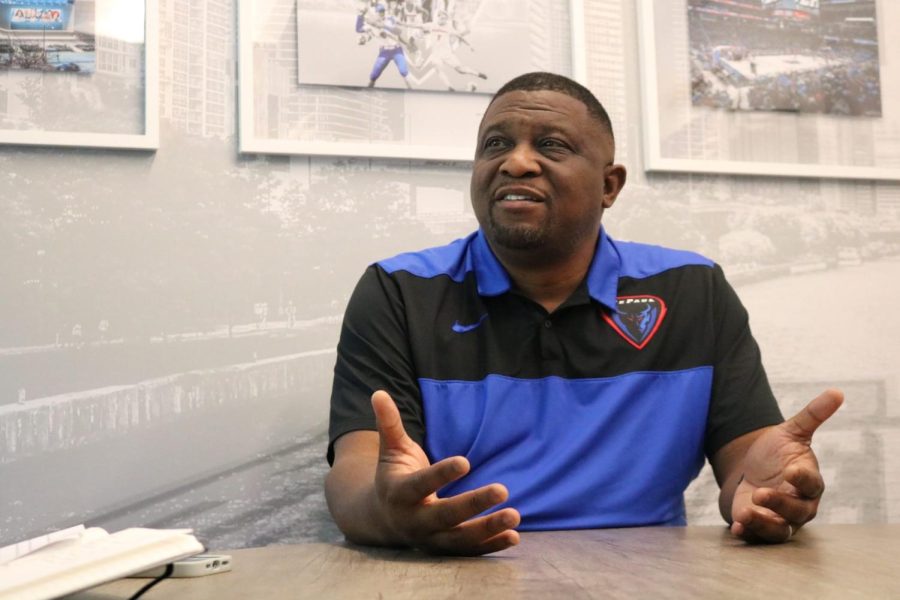 DeWayne Peevy sits in his office during an interview with The DePaulia.

DePaul was empty when DeWayne Peevy visited on the Fourth of July two years ago. No one was around, but he fell in love with the campus anyway and knew it was where he wanted to be. A little over a month later, he was hired as the new athletic director.

As Peevy closes out his second school year, the door to his office is always open. The physical door stays closed at times, but his open-door policy means all are welcome.

During Peevy’s time at DePaul, he has worked to spread that welcoming attitude throughout the athletic department, while also focusing on strengthening the department now and in the future.

“My goal in this chair is to stay ahead of their requests,” Peevy told The DePaulia on supporting the coaches and players. “I want to be thinking about what they need and what’s best for them and their programs without them feeling like they have to come to me and ask about something.”

Peevy came on from the University of Kentucky in August of 2020 after former athletic director Jean Lenti Ponsetto retired. It was during the height of the pandemic when few people were on campus and no sports were taking place in the fall. With the absence of sports, Peevy turned to creating a five-year plan and updating parts of the department.

One of the first things that Peevy did when he arrived at DePaul was update the aesthetics in the athletic department, along with new furniture to make the staff and athletes more comfortable while working, lounging or studying.

“It made everyone feel like, when our student-athletes came back, they were just coming into a new home, if you will, which I thought was a great start and a great idea,” men’s tennis head coach Matt Brothers said.

When everyone returned to campus, Peevy immediately got to work learning names and getting to know the people around him. His open-door policy welcomes anyone into his office, located on the second floor of the DePaul athletic center near the weight rooms, he enjoys being able to connect with the athletes.

“I love going out in the hallway when they’re getting ready to go into the weight room and they’re just in their normal, chatty moods, just hanging out,” Peevy said. “It’s become the student-athlete lounge right outside my office, so whatever we do structurally with this building, if we ever renovate, I have to make sure to put that somewhere, so I don’t miss that.”

Peevy’s determination to engage with everyone is part of what made Taylor Stapleton, executive associate athletics director for revenue generation and strategic initiatives, want to join Peevy at DePaul after working at Kentucky together.

Stapleton joined in November of 2020 and works with Peevy to boost the marketing and fan engagement of the athletics department. Together, they have focused on bringing in more fans and the best ways to improve the fan experience at DePaul athletics events.

“I love how relationship-focused he is, I think that’s a real key to his success and our success,” Stapleton said. “Getting to know people as we’re looking at corporate partners, as we’re looking at ticket holders, trying to encourage people to come out. There’s never a time where he’ll say, ‘I don’t want to engage.’”

One of the ways Peevy maintains that engagement is by showing up and supporting DePaul’s various teams.

Volleyball made history this year by clinching their first Big East Tournament appearance, and one of their most important games on the road to getting there was against Butler on Nov. 12. It was an 11 a.m. ET game on a Friday, yet Peevy came out, had dinner with the team the night before, and came to support the team at the game.

“I just thought that was really cool that he recognized it was a big match moment and he showed up during the heart of when basketball season was starting,” volleyball head coach Marie Zidek said.

Peevy said that he’s tried to make it to every basketball away game, and attend each Big East tournament. His goal was not only to support the teams, but also use the games and tournaments as a way to learn about other athletic programs and see how DePaul compares and identify areas for growth.

One of the additions Peevy made to help teams out was give them a sports administrator that oversaw all the operations, and for men’s tennis, that person was Stapleton. He helped the team in any way needed and made sure that the season ran smoothly all the way up to their second-straight NCAA tournament appearance this May.

“DeWayne knew how good Taylor was going to be,” Brothers said. “I really think that that’s sort of been our gift from DeWayne, is Taylor.”

In Stapleton’s office, a copy of Peevy’s Dream Big strategic plan hangs above his desk, where the goal is to be the top athletic program in the Big East conference. Along with that, he also wants the athletic department to be something that helps bring in new students of all types.

“I want DePaul to be a hat on every student’s table,” Peevy said. “Not student-athletes, but every student. If we can do our part in athletics, everybody might consider DePaul, no matter who they are or who their needs are, because that’s our role.”

He has already begun to do that by bringing in all new marketing staff, along with the men’s basketball program. And his plans to further expand the athletic department can help with that as well — he aims to add a new basketball practice facility and provide sports-based locker rooms, something they have never had before.

Zidek, along with women’s soccer head coach Michelle O’Brien, both brought up their desire to have locker rooms for their teams on campus. O’Brien would also like to see an indoor training facility for the soccer teams, along with updates to the field, while Zidek would like to see a new volleyball court at some point.

While there is still a list of things that Peevy would like to get done and wish lists for every program in the athletic department, Peevy listens and talks to them and knows what they want and what needs to be on his list.

“Everyone is on a different schedule, which is the hard thing about athletics — people are off training and doing their own thing and really just spend the most time with their team and their staff,” O’Brien said. “It’s hard sometimes to see the day-to-day, face-to-face interactions, but his door is always open and that’s very noticeable and evident, so if I ever want to walk in there and talk, he’s always available.”

Peevy’s goals for expansion may be more long term, but for now, his attention is on name, image and likeness (NIL). Last year, Illinois passed a law that allowed athletes to make money from their NIL, and to help with that, DePaul created the LEGACY Exchange, which helps athletes learn about the new legislation and what opportunities are available to them. He wants to continue to help the students learn more about what they can do with the NIL.

“My goal is just to bring people together, be a collaborator, be somebody that, even if I make steps up the ladder, I get to reach down and help the next person pull up to,” Peevy said. “It’s not just a siloed concept where athletics want to strive at the highest; who cares what everyone else does. Our goal is to succeed to help our university.”