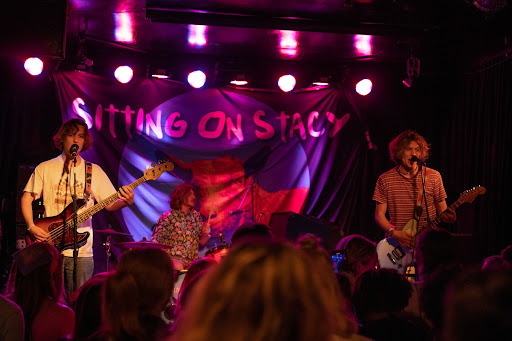 From left to right, Kyle Hart, Trevor Smith and Hoyt Yeatman are pictured jamming at Beat Kitchen on their Chicago stop of their first national tour.

In an interview with the DePaul Music Business Organization, indie classic-rock band Sitting On Stacy gave insight on their beginnings and progress before their show in Chicago at Beat Kitchen. Now under the guidance of their label and partners 1824, Republic Records and Let’s Get It! Records, the group has advanced fast within the industry and reflected on their performance experiences.They range from playing covers in bars as kids, opening for the Jonas Brothers in the summer of 2021, playing their headlining tour in 2022 and now getting ready for a festival run that includes Chicago’s very own Riot Fest.

Sitting On Stacy is composed of Hoyt Yeatman, (lead vocals/guitar), Kyle Hart (bass/vocals) and Trevor Smith (drums). Hailing from San-Diego California, the band stopped in Chicago while on their first national tour, showcasing songs from their two released albums, “Perfectly Sane,” released in 2019 and “Obsessed,” released in 2017, along with their newly released singles.

“We were all 10 or so, they put kids in bands together, and they’d have us cover three songs, from like, Guns N’ Roses, dad rock songs, and we would perform at local bars and stuff,” Yeatman said.

While in high school, the members drifted apart, forming individual bands, but eventually came back together to start writing and performing music. But this time at San Diego University, where Yeatman and Hart were enrolled.

“We kind of had different bands in high school, and over the course of everything, we combined,” Yeatman said. “College is where we took off, playing house shows, and all the craziness in San Diego.”

Just after the start of the Covid-19 pandemic, Sitting On Stacy posted their first video on TikTok on March 24, 2020; an indie-esque, mini music video and cover of “Boys Don’t Cry” by The Cure that amassed over 150k views.

“I remember our first cover… and we were like, ‘Oh, well let’s just post something, this is cringe,’ and then it got so many views and we were blown away, ” Hart said.

“We became addicted to it,” Yeatman added.

The shots transitioned from the boys performing in a grassy mountainous scene to crying on a bathroom floor with an ever appropriate black and white filter to add to the drama. Seeing the success from that video, the members switched their focus to more classic rock covers paired with fun mini music videos, connecting them to new audiences that would not have been reached had it not been for TikTok.

TikTok has been a valuable resource for a wide variety of musicians, and Sitting On Stacy understands what that can mean for upcoming artists. Having access to high-quality video production gives them a leg up on smaller indie artists, as their visual style is very clean, vibrant and immediately catches your attention as a casual scroller on the app that constantly throws content at you. “It helps you kind of get a lot of exposure to fans that are far away, you wouldn’t get that posting on Instagram,” Hart said.

Sitting On Stacy continued to find success on TikTok, with actor John Stamos duetting a TikTok cover they did of The Beach Boys’ “Wouldn’t It Be Nice,” coincidentally with former Beach Boys member Mike Love. Other celebrity shout outs include the likes of Joe Jonas and Mark McGrath. TikTok has allowed many artists to better connect with their fans on a more personal level, which Stamos exempted by reaching out to the boys to potentially even attend their show in Los Angeles.

Yeatman remembers the moment he found out the “Full House” actor was interacting with their content.

“I was walking up the stairs and I saw the notification that John Stamos duetted [our video],” he said. “He reached out and followed us, and he’s really nice. We would be DMing like all the time, and when we posted the tour [announcement] he was like, ‘When am I getting the invite?’ so we invited him to the Roxy [Theatre] show in L.A.”

Posting covers seemed to be the key to their viral success for some time. Most of Sitting On Stacy’s TikTok videos from 2021 consist of classic rock covers and hundreds of supportive comments requesting their favorite rock hits. However, they used this momentum and audience to promote their own music, with singles such as “This Summer’s Day” and “Some Kind of Way” trickling into their feed with equally vibrant and engaging videos.

Sitting On Stacy’s music covers a range of indie and alternative sounds, from more grunge rock based tunes like “Apple Pie” and “Bleed Mentally” with gritty electric guitar riffs and vocals, guitar solos and raw lyrics, to their newer singles “Chest Hair” and “This Summer’s Day” with clearer brassy tones in the electric guitar that give off a beach rock, teen summer vibe paired with lyrics about summer love, being free spirited and fun that so many of their fans rave over.

Speaking about their already completed tour dates, including stops in Atlanta, New York and Dallas, the band shared that they had been blown away by the support. The band was visibly excited as they reminisced about signing shirts, boots and Sitting On Stacy merchandise at their completed tour dates.

“Fan interactions have been crazy everywhere we go,” Yeatman said. “So many people around the country have been really nice, and everywhere we have been, they’ve been singing the words, smiling, moshing, dancing — it’s crazy. Especially the new songs, and everyone is singing it back, and we’re like, ‘What the heck?’ Going to all these places we’ve never been.”

“We don’t know if fans will show up, but they showed up, and it’s been dope,” Smith said.

As for their plans after their month-long tour, Sitting On Stacy is already excited about the future, hoping to release new singles and get back into the studio.

Sitting On Stacy will be returning to Chicago for Riot Fest, playing Friday, Sept. 16.