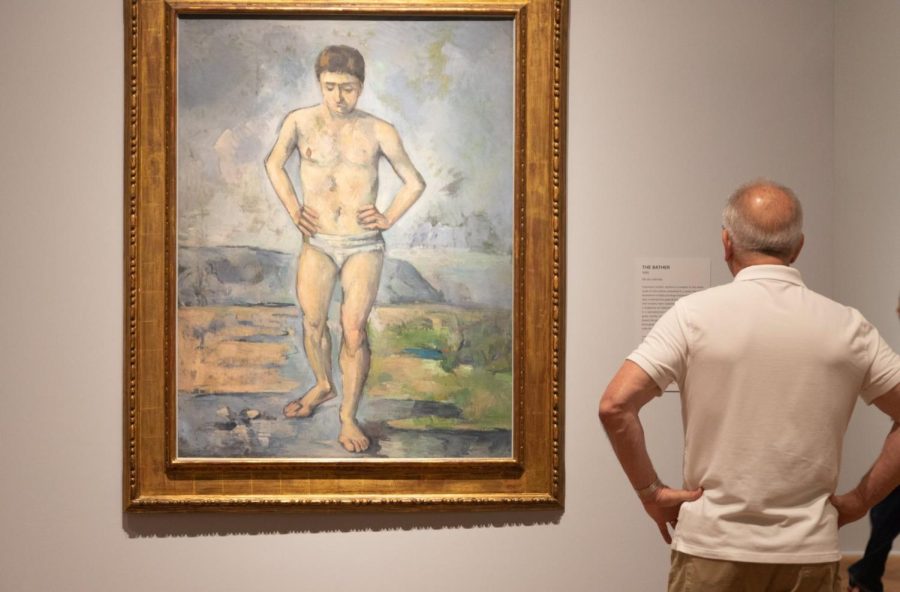 A man reads the description of "The Bather," which Cezanne painted in 1885.

Hidden away within the depths of the Art Institute of Chicago resides a quiet hallway, baring only a single name — Cezanne.

As museum-goers enter the exhibit, they are greeted by warm summer hues of green and blue, allowing individuals to get lost in the sunny countryside of the south of France, where French painter Paul Cezanne grew up and lived out the majority of his lifetimes.

Holding over 80 oil paintings and 40 watercolors, each step within the gallery allows both art enthusiasts and passersby to admire Cezanne’s craft and legacy through his iconic landscapes, still lifes and portraits.

Beginning with his earliest works and ending with posthumously published paintings, Cezanne’s craft highlights his pursuit of whether or not a painter could invoke more than one sensation at a time and if so, would his work be more legitimate than those that could not?

Art history student Sonia Szonjaszurop believes Cezanne’s lack of proper form sets his work apart from his contemporaries, such as Monet and Picasso, who found a similar path to notoriety during the 19th century.

“So, why I really like Cezanne and what I think explains his popularity is that he is kind of on the fringe of impressionism, but he is able to formulate his very own unique style,” Szonjaszurop said. “As someone who is interested in modern art, Cezanne’s style is really something that paves the way for artists [to] cultivate their own styles.”

The Art Institute’s exhibition of Cezanne’s work is the first in more than 25 years. This year’s showing was assembled with a desire to encompass the scope of his subjects and his lesser-known works.

As for her favorite painting, Szonjaszurop’s answer resides in Cezanne’s study of everyday objects.

“If I were to pick from this exhibit, I really like some of the still lifes, especially ‘Still Life with Apples.’ The way he treats the paint is so unique and mesmerizing,” Szonjaszurop said.

The exhibition houses a myriad of moments within the painter’s life and legacy, from his earliest sketches to his final pieces, such as the massive “The Large Bathers,” which stands at over six  feet tall and eight feet wide.

University of Chicago senior and art student Alice Fang expressed her adoration for Cezanne’s unique designation within his paintings.

“I have been a fan of Cezanne since I was very little, so it’s been very exciting to see a huge collection of his work,” Fang said.

“What’s really mesmerizing about his work is the very subtle yet quite obvious sense of like disruption that marks the transition from impressionism to cubism to modernism,” Fang said. “I just like how he divides up each canvas into almost little interconnecting blocks.”

Despite Cezanne coming of age amid the post-impressionism period, his work paintings offer impressionistic qualities, such as narrow brushstrokes, that offer a faint outline of natural forms such as mountains or scenery.

Yet, throughout his years, Cezanne became known as the predecessor of fauvism, which is defined by bold, explosive color and an aggressive application of paint on its canvas, creating a blotchy, thick appearance.

Sarah Chambre, a tourist from London, articulates her esteem for Cezanne’s particular presence within the gallery.

“You can clearly see he is part of that same school of artists, but I’ve been really struck today by this exhibit today,” Chambre said. “It’s lovely to see all his works together and to admire how extraordinary his techniques are and how they move over his lifetime.”

Although regarded as the pioneer of cubism, Cezanne preferred not to anchor himself to a specific set of rules or expectations, instead devoting his attention to symbolism and the overall essence of his art.

“He’s staying with the idea of the bathers, but whereas earlier on where they felt cartooned on to a quiet rich background, we’ve gone to full impressionist style by the end,” Chambre said. “What I would say about this picture [‘The Bathers’] is that it is showing so much light and form and the bathers become almost allegorical, they’re disappearing into the background whilst merging with it. They are a part of it.”

Cezanne’s landscape-style compositions highlighting the faceless nude bodies of bathers are easily some of his most iconic works. With over 200 versions of both men and women bathing beside a body of water, this unofficial series acts as a timeline for viewers to observe Cezanne’s growth both as an artist and a man.

“‘The Large Bathers’ has always been my favorite, it really shows a sort of culmination of his work, a swan song almost,” Chambre said.

While the Cezanne exhibition will remain until Sept. 5, it is more than evident that his memory will continue onwards, guiding individuals and artists alike in their quest to elicit emotion through paint.