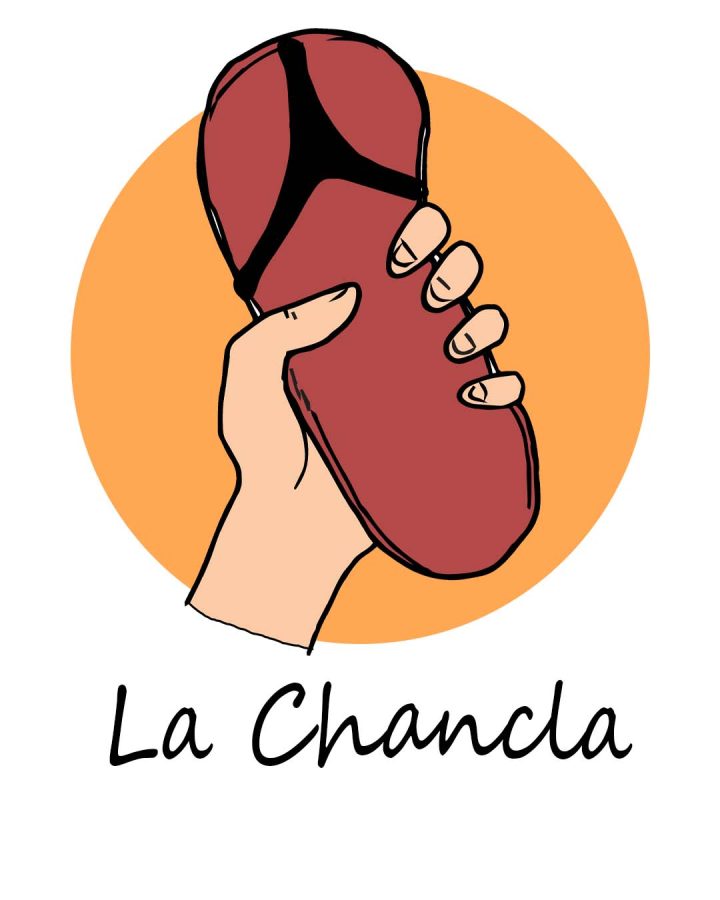 In the kitchen, Doña Inés is cooking lunch for the family. She takes great care with it, as her mother taught her.

She wants her son, Ricardo, to be prepared for the football match he has later at a nearby school. She only wants to see him be successful in whatever life path he decides to take.

Suddenly, she hears something break in the living room. She rushes over in the way that only a mother can to see that her little Ricardo just smashed a beloved family heirloom with his ball.

With her face full of rage, she grabs her “chancla” or flip flop right from her right foot and starts running behind little Ricardo.

Fast forward twenty years later, Ricardo is a businessman and, with great shame, is telling his parents how he lost all his investment money in an obvious NFT scam.

Both Inés and Ricardo look at a nearby sofa, where Inés’ “chancla” lays. Then, their eyes meet. And Ricardo starts running for his life.

“When you mention the ‘chancla,’ all of these [comedy] sketches that joke about the Latina mother and the ’chancla’ come to my mind,” said Maria Camila Contreras, a Colombian clinical psychologist. “Always as a joke and never as a concern on how we see physical punishment.”

This portrayal of the physical punishment as something common and laughable in Latinx culture has made it feel, for some people, as something normal or even expected when raising a child.

As a society, we tend to agree that violence is a negative thing, so why would some people use it against their own children?

Mexican psychologist and psychotherapist Rafaél Kérlegan provided a historical explanation for this behavior.

“We need to understand that Mexican culture, as with all Latin American cultures, is a historically violent culture,” he said.

For some, physical punishment is even an essential part of a proper upbringing. Argentine psychologist Antonella Salerno proposes that people tend to justify this by either minimizing the potential negative effects or by appealing to tradition.

“[T]he normalization as a defense is what often appears as: ‘Well, but it’s not that bad,’ ‘What he’s trying to do is raise me’ or ‘It used to be done like that,’” she said. “All these ways of reasoning that exist perpetuate the raising of children with physical punishment.”

Sadly, the problem of parental abuse in Latin America worsened during the pandemic — disproportionately so in lower-income communities, according to the Inter-American Development Bank.

It is important to reflect on how the normalization of physical punishment for children in Latinx communities could be affecting the population on a personal and societal level.

Kérlegan states that abuse can cause real neuronal damage, in addition to emotional harm. “Abuse — properly speaking, violence — will always generate some kind of consequence,” he said.

Additionally, children that face abuse through violence as a common method of punishment will not have the same way of interacting with others in comparison to a child that was not facing that abuse.

Even though most parents today understand that physical punishment has negative consequences, that doesn’t stop them from using it on some occasions.

“[It] has to do with the emotional dysregulation of the parents and the lack of alternative resources to manage everything that fatherhood and motherhood imply,” Salerno said. “So, when there is emotional dysregulation, and the person is filled with rage, he becomes a person who loses control of what he is doing and can end up committing these types of acts.”

While I’ve been painting a dark image of parenting in the Latinx community, it would be a mistake to only focus on the negatives when there are also representations of Latinx parents as especially loving, caring and involved in the life of their children.

“There are more cultural things about Latina moms,” Contreras said. “For example, food. We are very affectionate through dishes, sharing meals, expressing the care with that ‘mijito, don’t leave without having breakfast.’”

Raising children and keeping a family together is complicated, and causing harm to someone while loving them is something that unfortunately happens.

By giving more visibility to the care rather than the abuse, people will learn a better way of approaching difficult situations in raising a child.

“We have to question why we don’t focus and celebrate more [of] those characteristics of Latina mothers that focus on care and affection, instead of those that are focused on violence,” Contreras said.