Opinion: Coming out in college isn’t late in life 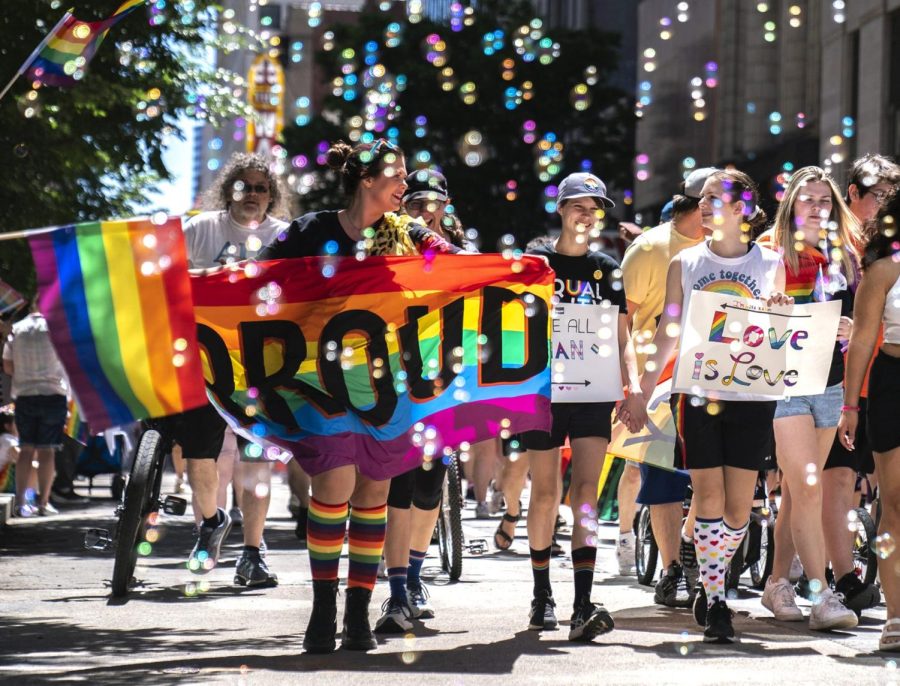 Amber’s story:
Everyone remembers the gay straight alliance club in high school. A collection of students already out and proud, and slightly a little too much into anime. As a 14-year-old, I watched these kids and was confused how they were so proud. “How are they so confident to wear rainbow socks and techno purple hair?” a young Amber thought.

I didn’t think I was gay. In fact, I was so sure that kissing my best friends was just something girls did. It wasn’t until the pandemic hit and I was watching Euphoria with a couple friends that I realized what I did in high school wasn’t quite “hetero.”

I was embarrassed — I always thought women were attractive but I thought it was just because I envied them, not that I wanted to be with them. I couldn’t relate to a lot of the gay people I knew — hating men, against the sorority — girly style I became comfortable in.

I finally came to terms with and was excited for this new journey, as finally coming out as queer at 21 — but I wasn’t prepared for the shock value and backlash. People didn’t believe me. I felt like an imposter in the queer community because I didn’t find out in my childhood. I never had a high school girlfriend or had an obsession with buttons.

More than half of gay men and nearly 40 percent of lesbian women come out before the age of 20, according to WebMD.

I feel I missed out in the formative years to find myself in my sexuality.I wasn’t receiving comfort in a group I thought was supposed to be accepting. Phrases like “You don’t look gay” and “How did you not know for so long?” were common for me to hear. People who knew my previous boyfriends couldn’t wrap their head around my ability to like both, almost sounding insulted that I could even suggest that.

While this was difficult to move past, and still something I struggle with from time to time, I have become more comfortable accepting who I am regardless of the appearances I show.
Corey’s Story:
Growing up in rural Wisconsin, there simply were no openly out gay people. The only ones I knew were hidden deep in the closet and from the suburbs some 20 minutes away. With that said, I took time to come out simply because I did not want to be the only one. I didn’t want to bother with the attention that being gay in that part of the country would bring.

LGBTQ+ rights still remain to be quite the controversy up there, so I was in no hurry. To this day, I only know one other openly gay person from my close-knit graduating class of 60-something.

Because of this, I knew that having a bold Instagram post sharing my sexuality with the entire world was never going to be my style. I’ve always had the understanding that it’s just a tiny part of my life. I opted for a more personal route with those close to me and just let people figure it out for themselves from there. it isn’t that hard to put the pieces of the puzzle together.

When I got to DePaul, I was always open about my sexuality, considering DePaul my oasis where I could express that part of my life. But it wasn’t until August 2020 that I peeled off the bandaid.

Historically, my parents have a track record of being homophobic so having that conversation with them was something I was afraid of. My parents found out in high school. But long story short, they tried to gaslight me out of it, so we pretended I was straight until 2020.

As an ambitious person, I focused solely on my career aspirations for the longest time until I realized I desire more out of life than just that. Because of this realization, I eventually sent my parents a respectful, yet firm, letter that got a pleasant response accompanied by freedom of doing whatever.

As someone who never had any gay role models or people near me, coming out was something that terrified me so having this slow turning process was ideal. It wasn’t like one day I woke up as “the gay kid.” It was all over time, and I found those I least expected to be supportive were actually those I found the greatest comfort with.