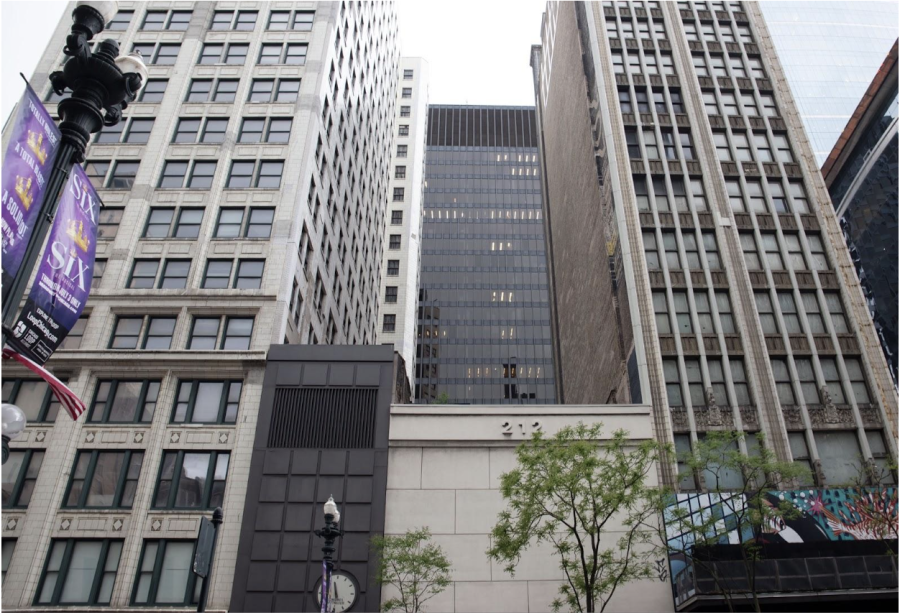 The Consumers Building (left) and the Century Building (right) stand empty on State Street as the Dirksen Federal Building looms behind them.

Students rushing to class in a hurry usually never take the time to notice the two Chicago buildings that are soon to face their unfortunate fate.

The Century and Consumers Buildings, built in 1915 and 1913 respectively, are just a three-minute walk from DePaul’s Loop Campus. The buildings are located at 202 S State St, Chicago, IL 60604.

The 16 and 22-story buildings have sat vacant for 17 years. They are now in the middle of a conflict to decide their fate.

The General Services Administration, a federal agency that helps manage government facilities, purchased the two buildings in the early 2000s due to security concerns for the Dirksen Federal Building, which stands just behind them.

Illinois Sen. Dick Durbin earmarked $52 million for the buildings’ demolition. He even wrote an opinion piece for The Chicago Sun-Times expressing his concerns about their proximity to federal courthouses and government offices.

But many individuals and local organizations think removing them is the wrong solution to this security dilemma.

Preservation Chicago is a nonprofit organization that is best known for its “most endangered buildings” list that it sends out each year. However, they are responsible for much more than these annual lists in the fight to preserve historic buildings, such as the Century and Consumers Buildings.

“We kind of think of ourselves as a public service,” said Ward Miller, the organization’s executive director.

Miller is a fourth-generation Chicagoan and lived in the Loop area when he was 5 years old.

“Ever since I was a child I was fascinated by Chicago buildings,” he recalled.

Miller said the Century and Consumers Buildings are at risk after Durbin’s request for their removal was granted as part of a larger federal spending bill that passed in March.

Preservation Chicago’s goal is not only to save these buildings from demolition but to repurpose them. Although their initial proposed repurpose plan involved turning the buildings into a residential area, they have since revised the idea.

Miller said that the current idea circulating is a Chicago archival center. He explained that the goal of the archives would be to “help tell the story of the foundations of many cities.”

The archival center would become a center for many organizations to store their histories that they may not have space for.

“This would make these buildings not only treasures of the Chicago built environment but of our collective histories,” said DePaul history professor Amy Tyson, who specializes in public history.

Not only would the archives tell individuals’ stories, but the buildings themselves have a story to them.

Reed Kroloff is the dean and Rowe Family College of Architecture endowed chair at the Illinois Institute of Technology. While he understands and respects the security concerns for the Dirksen Building, Kroloff agrees with Preservation Chicago that demolishing the buildings and leaving an empty space in their wake should be avoided if at all possible.

“I think it would be terrible,” he said.

Kroloff said he and many others in the architecture community are distressed at the possibility of losing these buildings.

“They are pieces of history because they reflect the experiments of the Chicago School in the hands of two of its leading practitioners,” Kroloff said.

Chicago School architecture refers to the style of a group of architects at the turn of the 20th century who brought new inventions in technology and design.

The Chicago School period saw the shift from brick buildings to tall steel frame buildings, with the first skyscraper being invented here in Chicago. Kroloff said architects at this time began to celebrate the new structure of steel frames instead of hiding it.

Besides a shift in design, the city also experienced a shift in culture. Kroloff explained that instead of the 50-story office buildings owned by a single corporation that are common today, workspaces like the Century and Consumers Buildings were often occupied by several small businesses and featured more public space.

“They were a collection of all of these smaller merchants, so there’s potentially a lost history there of these lesser-told tales,” Tyson added.

The buildings are listed in the Loop Retail Historic District on the National Register of Historic Places and are currently being considered for a UNESCO World Heritage Site nomination.

Currently, 22,283 people have signed Preservation Chicago’s petition to halt the demolition proposal and save the buildings.