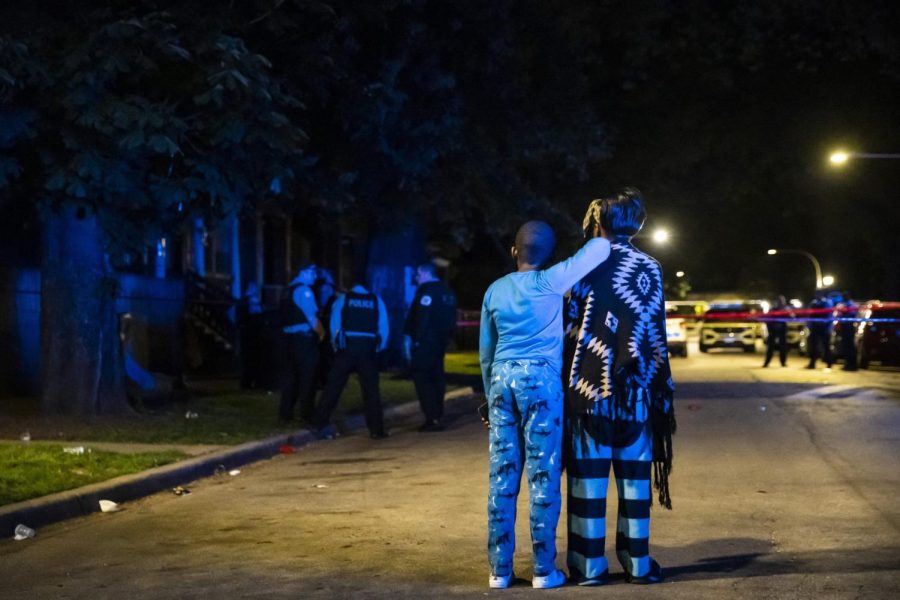 Family members watch as Chicago police investigate in the 5700 block of South Carpenter Street, where a man was shot to death during a party on the Englewood neighborhood block on the South Side, early Sunday, May 29, 2022, in Chicago. (Ashlee Rezin/Chicago Sun-Times via AP)

As a number of recent high-profile shootings across downtown Chicago have rocked the city, overall gun violence across Chicago has decreased. Violence prevention organizations attribute this to outreach and development programs for Chicago’s at-risk youth.

Citywide shootings have dropped by nearly 15 percent compared to this time last year, according to the Mayor’s Office Violence Reduction Dashboard. West Side neighborhoods have seen an even greater decrease. According to the dashboard, West Garfield Park has seen gun violence decrease by nearly one-third, Austin’s experienced 37 percent fewer shootings and North Lawndale has shown a 58 percent decrease in gun violence.

Peter Cunningham, communications consultant for Chicago CRED, said he believes CRED and other outreach groups have aided in this decrease by connecting with those most likely to commit gun violence.

“It’s all about just being present and authentic and real in their lives, and giving them the support they need to make the right decisions,” he said. “A lot of these guys have been through trauma, and they tend to make decisions more out of fear or out of an emotional place instead of a more rational, organized place. So how do you help them stop, take a deep breath, think through what happens? Having trust and having those relationships is crucial, and the outreach guys are the ones who do that.”

Outreach teams, consisting largely of adults who have been through the criminal justice system themselves, work to form personal relationships with individuals at risk of committing gun violence or becoming a victim of one.

One common factor across Chicago’s violence prevention organizations is the emphasis on maintaining a hyperlocal approach towards reducing gun violence. Outreach workers operating in their own neighborhoods often know the youths involved in criminal activities and their families and sometimes even have former involvement in the same street factions themselves.

James Mitchell, 32, an Austin resident and outreach worker with the Institute for Nonviolence Chicago, explains the importance of building a connection with at-risk members of his community.

“I have to build some level of trust with him,” he said. “He’s carrying a gun because he’s afraid and he doesn’t trust anyone. So for us, it’s building that relationship — getting him to understand that whatever the reason you might think you need this gun to protect yourself, it’s at least 10 more reasons why you don’t. There’s other solutions, and a lot of times they don’t know that.”

Before becoming an outreach worker, Mitchell engaged in street activities not unlike the people he works with today. After serving time in prison and eventually being released, Mitchell shifted his focus from committing crimes to stopping the next generation from doing the same.

Once violence prevention organizations connect with participants, a crucial component of their work is addressing the existing trauma that may encourage individuals to engage in violence.

Mitchell, who’s lost at least 23 friends to street violence and been shot twice himself, describes how working with Nonviolence Chicago allowed him to unpack his traumatic experiences and impacted his outlook for the better.

“My mind is different — the way I think, the way I do things, the way I deal with my problems — and a lot of it is mental health,” he said. “I didn’t even know I had those problems until I started working for the Institute, until I started getting the help and started getting the treatment. Like, I used to get angry and couldn’t figure out why. [There were] a lot of things I didn’t know about myself, a lot of things I didn’t even know I had problems with.”

Additionally, Tara Dabney, director of development and communications at Nonviolence Chicago, notes how many Chicagoans have picked up additional trauma simply by living in underfunded neighborhoods.

“It’s easy to say, ‘there’s serious violence — that’s trauma,’” Dabney said. “What about the trauma of not having local schools, of not having healthy food in their communities, of seeing generations of dads and uncles incarcerated and targeted from birth? There are levels of trauma. Communities like West Garfield Park have been so disinvested in for decades, and that’s multi-generational trauma. So, we have to take that into account and understand that many times, violence is a symptom of that.”

Through counseling and life coaching, these organizations offer participants an opportunity to unpack and address those traumas — oftentimes for the first time — and encourage nonviolent decision making in critical moments.

“[When] you’re in a community and you’re gang-involved and you’re going through a lot of things, you’re taught at a young age, if A happens, B has to happen,” Matos said. “So it’s very important for us at READI Chicago to really dive into our cognitive behavioral interventions to be able to slow down our participants’ process, and for them to understand that if A happens, B doesn’t have to happen. There’s other options for you.”

Furthermore, organizations like READI Chicago present transitional work opportunities for participants, providing wages and time to address whatever circumstances they may be facing before entering the larger workforce.

“What better way than to have a program where you’re able to work on those things before you say, ‘hey, I’m ready to get this opportunity and go out to the mainstream,’” Matos said. “You only get one opportunity for that one job, or maybe your dream job. We’re building them up to be on a successful path, to get employment where hopefully it decreases their activity in the streets.”

Through cross-organizational efforts and collaborative groups like Communities Partnering 4 Peace, violence prevention organizations in Chicago have built a framework that allows groups to maintain a hyperlocal approach while strengthening each other’s ability to create change in their communities.

As it stands today, though, this network of organizations is stretched thin. For every at-risk individual involved with violence prevention organizations in Chicago, there are 20 more without services or guidance, Cunningham said.

Still, through expansion of violence prevention programs and greater investment in on-the-ground outreach organizations, Mitchell is hopeful that more and more young Chicagoans will put their guns down if given the care and resources they need.

“These kids don’t look like insurgents or terrorists to me,” he said. “Our city is beautiful, man, and it’s a lot of good people here. Half the people don’t even want to do what they’re doing — they just need help. It’s a beautiful place that needs help. Being out here, interacting with the community, building relationships, preventing it before it starts — this is the way. This is the way. I’m from both sides of it. I want people to understand this is the best way to change things.”