DePaul has no comment on Roe v. Wade planned, calls for students to host discussions 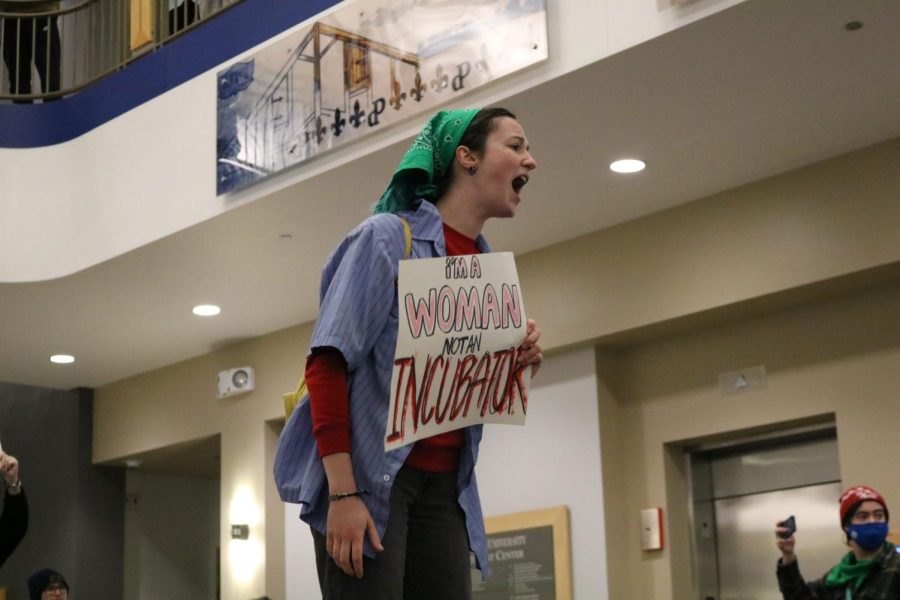 A student screams what their sign reads while standing on a table.

It has been 35 days since Politico released the leaked Supreme Court draft opinion on Roe v. Wade.

Despite the quad protest on the Lincoln Park campus hosted by the DePaul chapter of RiseUp4Abortion, students voicing their concerns on social media and protests downtown, DePaul has yet to release a statement on the draft ruling.

In terms of how administration is responding to the draft ruling, DePaul spokesperson Russell Dorn said the university leaders consider a number of factors in deciding whether to release a statement in response to an event or issue, and each situation is unique. Dorn said when a response is appropriate, DePaul’s mission and core values guide the content.

“Universities are centers of thoughtful debate, where diverse perspectives should be shared and debate is encouraged,” Dorn said in a statement to The DePaulia on May 23. “We expect and hope our community members are having these discussions whether or not the university has taken a stance.”

Sophomore Zoe Bragado said she thinks the lack of a statement is as a result of DePaul being the largest Catholic university in the United States. Even though the school is a religious institution, Bragado said the university should release a statement because it will prove religion and politics should not be intertwined.

Bragado said DePaul releasing a statement is important in an institution where only 41 percent of the 2020 incoming class was Catholic, according to DePaul’s most recent enrollment summary.

Freshman Emma Kate Bretzlaff also said DePaul should release a statement on the draft ruling to show their care for their students.

“I think DePaul needs to use their platform as the nation’s largest Catholic university to make a statement that freedom of choice trumps personal belief,” Bretzlaff said. “DePaul students want to know that the university we give so much money too has our backs and supports our freedoms.”

Bragado said another reason to make a statement on the draft ruling is because students have already outwardly expressed their opinions aside from attending protests and posting on social media.

“I have seen students protesting with sidewalk chalk statements on campus,” Bragado said. “I know that DePaul is aware that students are upset by this draft.”

The controversy of the Roe v. Wade case has been known as a battle between people for reproductive rights and people for sustaining life, specifically aimed at the argument of whether a person with a uterus should be able to get an abortion. But, as mentioned by Bragado and sophomore Evan Mueller, the overturning of Roe v. Wade is not just a matter of someone not being able to have an abortion.

Bragado added the case overturn would greatly affect people of color not just in receiving an abortion, but in general would add to the discrimination many people of color face with healthcare.

Mueller said a specific problem recently with healthcare is the nationwide baby formula shortage. This is affecting all families, Mueller said, especially those of color and LGBTQIA+ families.

“Most recently, Republicans voted against funding to address [the baby formula shortage], how are our country’s leaders going to demand [people with uteruses] give birth but not ensure the babies born are properly taken care of?”

Aside from general healthcare access, at the protest on the DePaul quad, many students raised how people could be denied hormone treatments when transitioning to another gender, restrict interracial marriage and contraceptives like birth control could be more difficult for people to access.

Despite the lack of a planned statement from the university, students still want DePaul to pursue a statement on the draft ruling.

“I think their silence may make students feel that they do not care about the possible outcome, so releasing a statement would prove that they do care,” Bragado said.

Bragado also said DePaul is full of students outside of Illinois so the administration needs to recognize these students will be impacted if Roe v. Wade is overturned and their home state decides to ban abortions.

“No woman should be unable to have jurisdiction over her body, especially the choice of whether or not they want to have a child,” Bragado said.

Mueller added that another benefit to DePaul releasing a statement would be providing a level of comfort amongst all the chaos in the world right now.

“This is something that students have demonstrated impacts them deeply, it’d be short-sided, problematic, and worrisome if the university doesn’t release a statement now,” Mueller said.