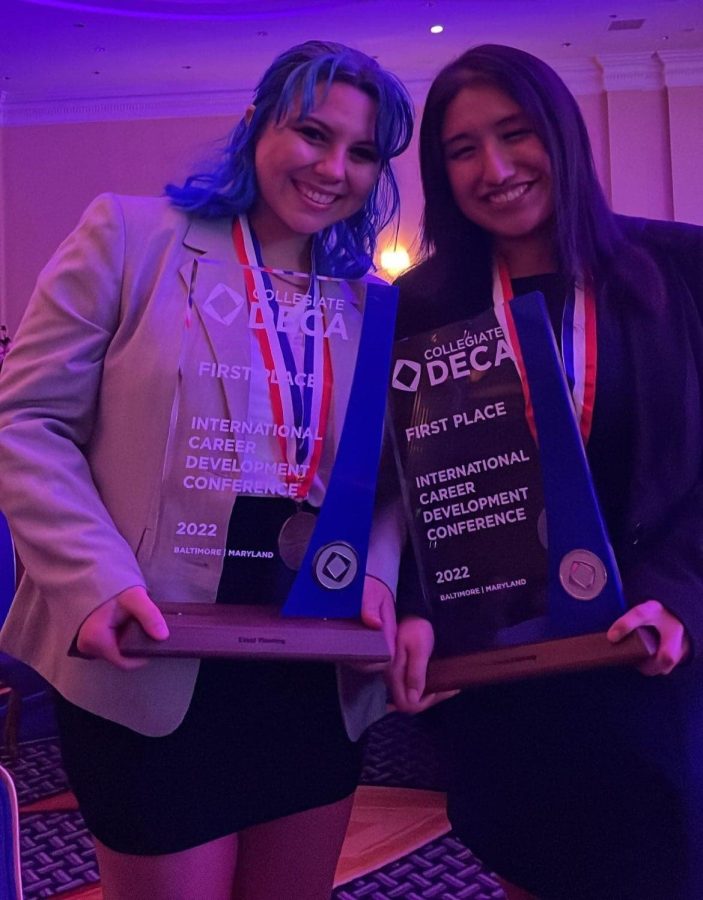 DECA is a competitive organization for college students “preparing for careers in marketing, finance, hospitality, management and entrepreneurship.” The organization boasts 4,000 members across 200 colleges and universities internationally.

Despite DECA’s wide reach, there is only one collegiate DECA chapter in Illinois. That chapter is hosted at DePaul. This means that at annual state-wide conferences, their only competition is themselves.

“Other states in the [United States] like Wisconsin, a lot of their different colleges have DECA chapters,” said Natalia Salamon, the president of DePaul DECA. “But it’s different in Illinois since we’re the only one.”

DePaul DECA are the sole hosts and competitors at the Midwest Collegiate Development Competition for Illinois. At the competition, students participate in three individual case studies, evaluating and offering solutions to business-related problems. This year, eight students competed and four ran the tournament.

However, in April, the team’s competition pool expanded a hundredfold. Seven members of DePaul DECA went to compete against 1,000 qualifying competitors from around the world at the 2022 International Career Development Conference (ICDC).

This spring, the team traveled to Baltimore, Maryland to compete across both individual and team events including Business Research, Entrepreneurship, Marketing Communications, Event Planning and Restaurant and Food Service Management.

The team was small but mighty, as nearly all participants were finalists, placing in the top eight and top 10 of their categories. Sophomores Alex Martinez and Sofia Feijoo even won first place in their team case study event.

Martinez and Feijoo said they had one hour to create a 15-minute presentation as mock event planners for specific types of companies, including a stadium and an airline.

“I learned a lot,” Martinez said. “It really taught me a lot about how to think quickly and think on my feet.”

Feijoo agreed, noting that time management and teamwork were the keys to creating a successful presentation.

“We would literally finish our presentation the second we were called into the room, and we had no time to spare,” Feijoo said. “You really have to use all of that time really efficiently.”

In the end, their synergy paid off. The two best friends won glass plaques for their first-place finish.

Senior Julia Adams, vice president of marketing, and junior Mary Newman competed in the Marketing Communications team event, finishing in the top 10. Sophomore Claire Tippey placed in the top 10 of the Restaurant and Food Service Management event and Natalia Salamon placed in the top eight in the Business Research event.

The competition was hard work, but DECA members like to work hard.

“I don’t know if everyone would want to admit it initially, but it’s also kind of fun even though you’ve got to prepare and practice,” said Jakub Parzygnat, vice president of finance.

Throughout the year, DECA participates in many other events leading up to ICDC. They attend conferences, compete, network with local businesses and professionals and continue their annual tradition of volunteering at the Chicago Marathon.

Over the past school year, the team has become a tight-knit group.

“I think that something that’s really special about DePaul DECA specifically is [that] everyone involved is so committed to making all other members feel comfortable,” Feijoo said.