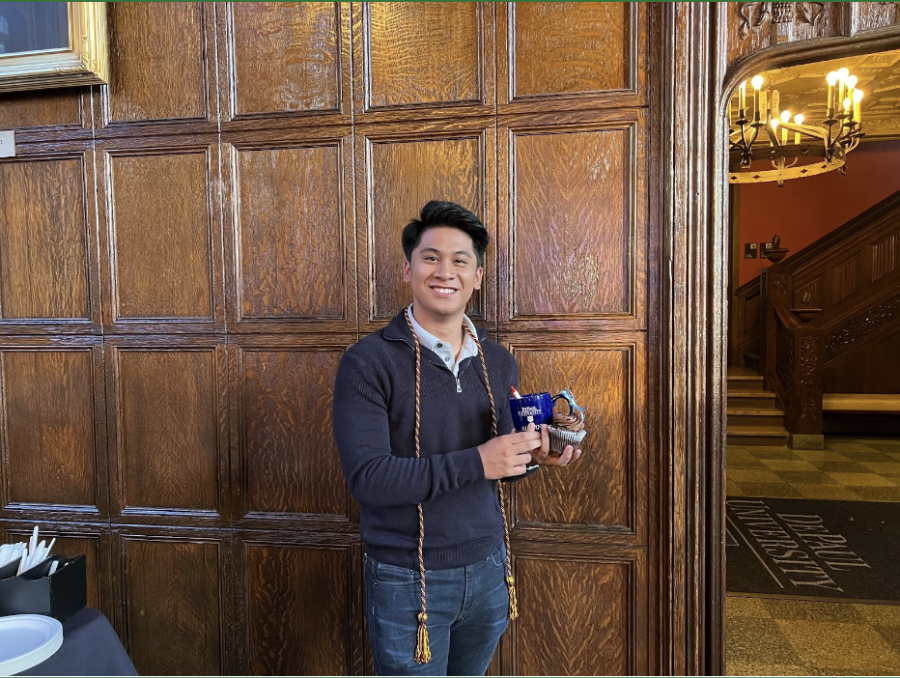 Senior Brendan Micor wears his gold and red cord given to him at the ceremony.

Graduation ceremonies are traditions held all over the world as a transition from one stage of a student’s life to the next.

For cultural groups who have been systematically discriminated against, cultural college graduation ceremonies serve as celebrations of togetherness and support.

DePaul held a variety of cultural graduation ceremonies for students from all cultures. DePaul recognizes all graduates for their achievements and grit in pushing through a pandemic.

The sixth annual graduation celebration for Asian, Pacific Islander and Desi American (APIDA) students was held on Wednesday, June 1 at Cortelyou Commons in Lincoln Park. The ceremony recognized all students who graduated in the fall of 2021, winter, spring and summer of 2022.

Due to the pandemic, the APIDA graduation ceremony has been held virtually for the past two years. Students were only able to celebrate at home rather than in person with their peers, family and friends.

Sam Schubert, an academic advisor, was excited to have the cultural graduations be held in person again and watch students celebrate with their families and friends.

“I think it’s really nice to show extra appreciation to the students that are graduating,” Schubert said. “It’s important to be recognized. We want to represent our APIDA students and acknowledge their efforts and accomplishments.”

Only 28 students registered for the APIDA graduation ceremony and while not everyone attended, several students brought family and friends to experience the moment with them.

Elevate presented each graduate with a red and gold cord and a gift. Elevate is a DePaul staff-served community that interacts and supports APIDA students.

“My family is a big reason I am graduating and was able to attend DePaul, and I’m thankful they’re here with me,” said senior Alyssa Pangilinan.

“I did come because I wanted the cord,” Pangilinan said. “But I also did not attend many events during my undergraduate years, so I’m glad I’m attending this one with my family.”

The APIDA graduation ceremony featured two video messages, from DePaul President A. Gabriel Esteban, and Jane Baron, the APIDA Cultural Center coordinator, who were unable to attend. The ceremony also included musical performances by the graduates and dinner.

Senior Brendan Micor said he felt emotional about closing out his undergraduate years with the event.

“I think that DePaul should hold more events like these,” Micor said. “I know many events are offered, but there should be more, if not more [events then] announcements about them.”

“It makes me very proud to be a part of this community, especially when I know that many other universities do not have the community that Elevate and DePaul provide,” Micor continued. “I’m looking forward to seeing how far these programs and events progress after I graduate and continue to make APIDA students feel like they matter.”

Along with the APIDA graduation ceremony, the Lincoln Park Student Center hosted the 26th Annual Latinx Graduation Celebration on Thursday, May 26. The Inaugural Black Excellence Awards were also held on Thursday, May 12, in the Cortelyou Commons.

The final inclusive graduation will be held on Monday, June 6th at 6 p.m. at St. Vincent Circle. The Lavender Graduation is an annual ceremony that honors and recognizes Lesbian, Gay, Bisexual, Transgender, Queer and Asexual students for their achievements and accomplishments.

Senior Ayyan Chaudhry feels at ease graduating from DePaul knowing that there are all-inclusive events.

“Identity-specific events are extremely important, and they should never be stopped,” Chaudhry said.