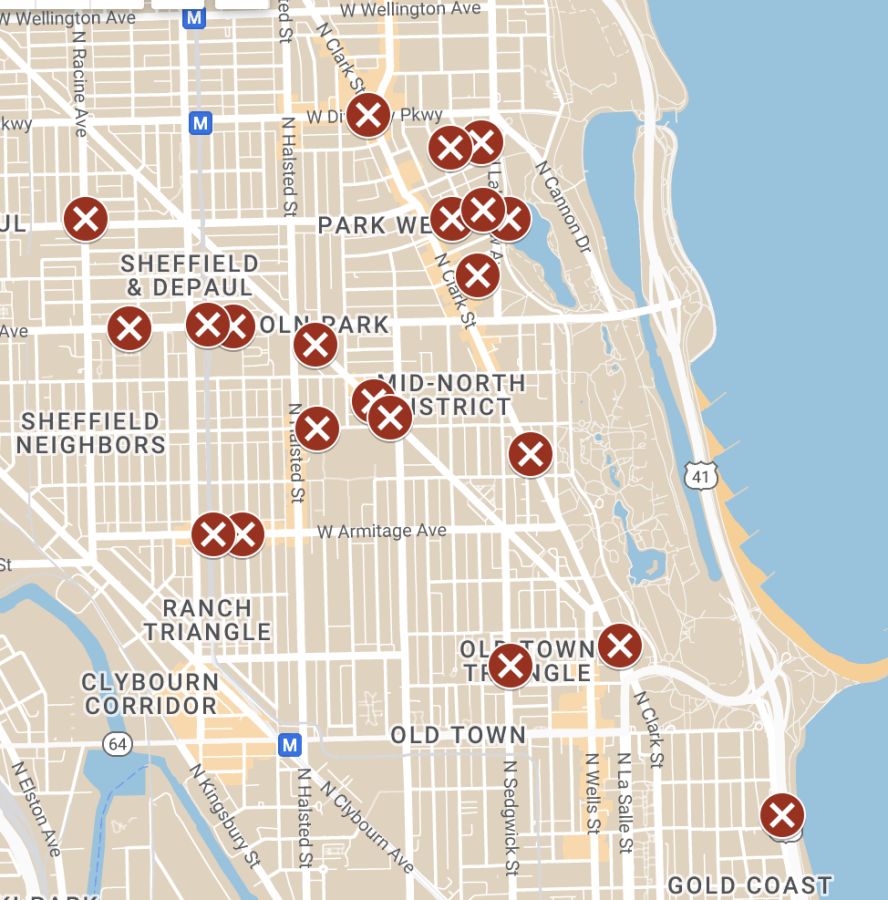 This map shows the approximate location of robberies in Ward 43 between 5/1/22 and 6/13/22, according to coordinates provided by the Chicago Data Portal. Area robberies are up 320% over this period from 2021.

Two robberies occurred in Lincoln Park Saturday afternoon, according to reporting by CWBChicago.

The incidents appear to be connected, as in both cases the attacker seems to have fled in the same 2020 silver Dodge Durango. The first robbery transpired at the 2600 block of North Hampden around 12:30 p.m., while the second happened at the 2600 block of North Lakeview Avenue at 1 p.m., according to CWBChicago. In both crimes, the victims were women.

No reporting thus far has indicated the robber using a weapon in either of Saturday’s attacks. This fits in with a pattern of similar crimes in Lincoln Park between June 1 and June 4. During this period, six strong-armed robberies (meaning no weapon was used) took place in Ward 43. Five of these were within the same five block area between Diversey and Fullerton Avenues and within one block of Lakeview Avenue, per information provided by the Chicago Data Portal.

Lincoln Park and other adjacent neighborhoods saw a slew of armed robberies in May, with one resulting in the shooting of a 23-year-old man. These robberies came to a halt when police arrested and charged 19-year-old Tyshon Brownlee with one count of attempted murder and five counts of armed robbery last month.

While Saturday’s robberies don’t appear to be related to the crimes in May, they do point to a recent surge in Lincoln Park. Since May 1, 21 robberies have taken place in Ward 43, up from only five during the same period in 2021, according to figures from the Chicago Data Portal.

Citizens with any information related to recent robberies in Lincoln Park can contact District 19 police at 312-744-8320.