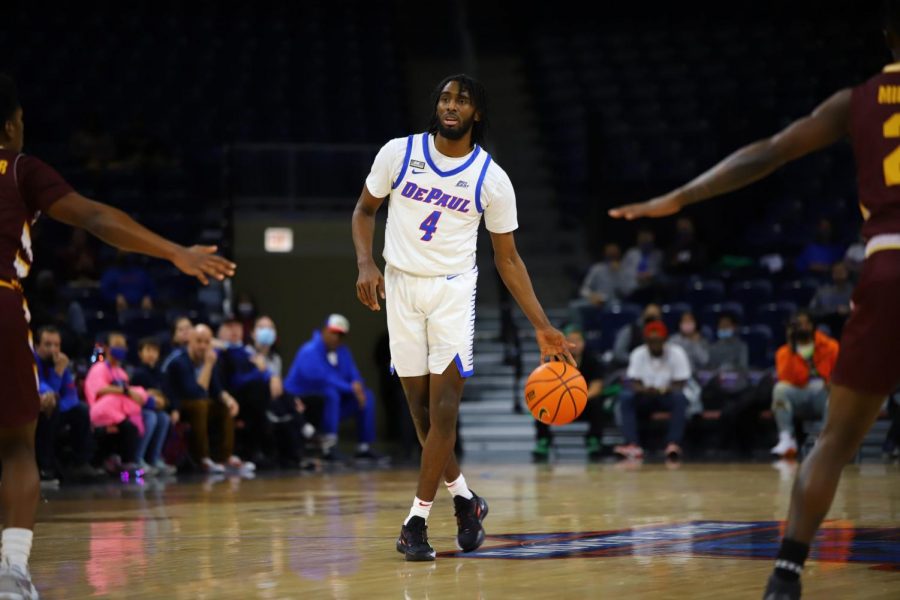 Javon Freeman-Liberty dribbles the ball up-court during the Blue Demons' win over Central Michigan on November 13, 2021.

On Thursday night, the Chicago Bulls announced their signing of undrafted rookie and former DePaul Blue Demon standout Javon Freeman-Liberty to a two-way contract for the 2022-23 season.

Freeman-Liberty, 22, will be one of the few players with an opportunity of playing for their hometown team. Signing a two-way contract will allow him to play for both the Windy City Bulls at the G-League level and Chicago Bulls at the NBA level.

Freeman-Liberty played his last two seasons for the Blue Demons after transferring from Valparaiso University in May 2020. During his 38 game tenure with DePaul, he recorded 721 points, 248 rebounds, 113 assists, 62 steals and 61 three-pointers made.

He made his mark on DePaul over the last two years, being a key contributor in their bounce back 2021-22 season. He led the Big East in scoring averaging 21.7 points per game, which ranked eighth among all NCAA Division I players.

The Blue Demons increased their win total to 15 games after only winning five the season prior and Freeman-Liberty returning for his senior season played a key factor in the team’s turnaround.

Freeman-Liberty will be playing for a young Chicago Bulls squad that made the playoffs last season for the first time since 2016.  He will join a talented guard group that consists of Lonzo Ball, Zach Lavine, Alex Caruso, Coby White, Ayo Dosumo and 2022 first round pick Dalen Terry.

The Chicago Bulls first game of the 2022 NBA Summer League took place Friday night and Freeman-Liberty was able to log some significant minutes in his debut. He played 18 minutes on Friday night and scored 11 points, shooting 5-9 from the field and 1-2 from beyond the arc, while securing two rebounds.

Freeman-Liberty’s next game in a Chicago Bulls uniform will take place Sunday at 4:00 ET against the New York Knicks on ESPN2.