DePaul men’s basketball falters down the stretch, falls to Georgetown 78-72. 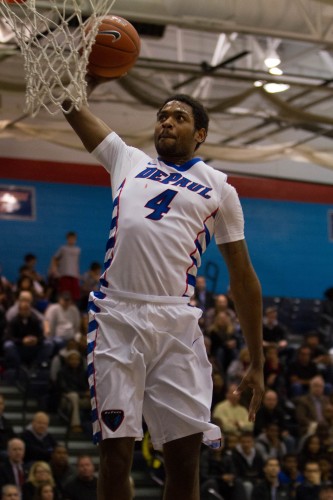 In their weekend loss to Villanova, it was an abundance of turnovers that put DePaul out of the game. Three days later, it wasn’t the abundance but rather the timing of the turnovers as the Blue Demons fell 78-72 to Georgetown.

“Late in the second we half we didn’t turn the ball over much,” head coach Oliver Purnell said. “But we turned the ball over three times and took two bad shots and that was the critical stretch.”

That stretch swung the game from a 64-60 Georgetown lead with 5:11 to go to a ten point lead for the Hoyas with only 3:42 to go, essentially putting the game out of reach for the Blue Demons.

The loss knocked DePaul to 9-9 overall and 3-2 in the Big East, their second straight loss after starting the conference season 3-0. The Hoyas picked up their third Big East win after scraping out the victory, in which head coach John Thompson III said “we were lucky.”

“There was a key stretch where we were very attentive to who the shooters were,” Thompson said. “We were fortunate that they missed and we could get some key rebounds.”

DePaul relied on the three for the start of the game. Jamee Crockett, Billy Garrett Jr. and Forrest Robinson all knocked one down from behind the arc as the Blue Demons raced out to a 19-11 lead. Georgetown clawed back five points going into the first media timeout, cutting the deficit to three.

Georgetown, anchored by forward Joshua Smith in the paint, forced the Blue Demons to take outside shots and, when they started to miss, Georgetown took a 26-25 lead. This led them into a timeout with 7:39 to go in the half.

The Blue Demons cooled off and continued to let Georgetown work them inside. The Hoyas, who shot 59 percent from the field in the first half, took incremental leads as the half wore down. LJ Peak hit a jumper with six seconds to go in the half, which stretched the Georgetown lead to 44-39 at the half. Myke Henry led DePaul with 13 points, which Crockett, who had started the game with seven out of nine DePaul points, hadn’t scored in the last 17 minutes.

While the Demons were able to put up 39 first half points, off the backs of 59 percent shooting from the field, Purnell believed that if the defense had been better in the first half, there would have been a nice cushion for them in the second.

“I thought defensively we weren’t as good as we needed to be in the first half,” he said. “We shot 59 or 60 percent and we just needed to better.”

The Blue Demons started the second half hot, with Crockett and Durrell McDonald knocking down threes while they forced two Georgetown turnovers. They took a 46-45 lead with 15:48 to play and were on offense when a stoppage in play occurred as Crockett was knocked to the ground near the sideline and the referees reviewed the footage looking for evidence of a flagrant foul. They did not find evidence of one and play resumed.

After Georgetown regained the lead on a three-pointer, DePaul was able to get a four-point swing on the other end. After a foul on Aaron Bowen that put DePaul in the bonus, he was given a technical foul for arguing with the referee. Garrett knocked down both free throws and Henry hit both shots of his one-and-one to give DePaul a 49-47 lead.

DePaul continued to win the second half, turning a 14-4 run into a 53-49 lead before Georgetown was able to eventually match them at 55-55, leading into the media timeout with 7:21 to go.

The Hoyas came out of the timeout and went on a 7-2 run, pushing their lead to the largest it had been all evening, going ahead 64-57. Forrest Robinson would knock down a three to cut the lead to four, but Georgetown hit two free throws and converted a turnover into easy basket for a 68-60 lead with 4:09 to go.

The Blue Demons would make it exciting down the stretch, cutting the lead down to 72-68 after a couple of Georgetown turnovers, but Aaron Simpson was unable to convert an and-one and Georgetown hit two free throws on the other end. Georgetown went back up by seven on the next possession but Simpson hit a desperation three with 16.2 seconds to go to cut the lead back down to four. The Blue Demons, however, ran out of time and were not able to tie the game back up, falling to the Hoyas 78-72.

“I think it was effort,”  Henry said. “I think they wanted it a bit more than us. They won the fifty-fifty balls and we didn’t.”

As Georgetown moved to 3-2 in the Big East, Thompson praised the toughness of all ten teams in the conference.

“When you have a conference that’s as deeps as ours top to bottom, the difference between one and ten is minuscule,” he said. “Every game is going to be a tough fight.”

DePaul has one more home game against St. John’s on Sunday before heading out on the road for three straight road games.