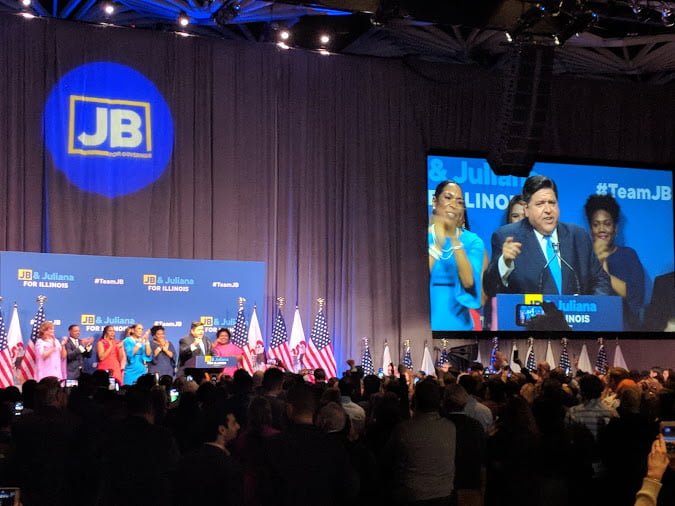 How much does it cost to win the Democratic nomination in Illinois these days? At least $70 million, according to the newly elected Democratic candidate, J.B. Pritzker.

After leading in the polls for the entire race, Pritzker successfully fended off a surging Chris Kennedy, and a grassroots neo-progressive campaign from State Sen. Daniel Biss.

Pritzker, 53, and first-time candidate, won a sizable double-digit victory, with the race being called before 8:30 p.m.

Pritzker is the heir to the Hyatt Hotel fortune and a billionaire venture capitalist. Pritzker has self-financed his campaign and spent over $70 million of his own money on the primary election — $4 million more than President Trump spent over the course of his entire presidential campaign.

Inside the Horizon Ballroom, at Chicago’s Marriott Marquis, Pritzker hosted an election party with an open bar and plenty of space for guests and media.

Across the street is the Hyatt Regency. When asked why Pritzker chose to host his party at the Marriott and not his families hotel, a staffer responded saying that “Mr. Pritzker is not really involved with the Hyatt. We choose the Marriott because it is a union hotel.”

Shortly after 9:00 p.m. Pritzker addressed the crowd and gave his victory speech. He first acknowledged his wife, M.K. Pritzker, and his two children. He then took a moment to thank his campaign team.

“Get some sleep,” he said. “But not too much, because the general election begins right now.”

Pritzker’s victory speech lasted nearly 20 minutes and covered a myriad of issues including a $15 minimum wage, banning bump stocks and high capacity magazines and focusing on minority and women’s rights.

Pritzker took a hardline stance against, what he says, are disingenuous candidates. He poked fun at Rauner for riding a motorcycle during his announcement to run for reelection.

“I’m not a perfect person,” he said. “I’m not going to pretend to be. But you won’t find me on the back of a motorcycle.”

Before the votes came in, around 6:30 p.m., Pritzker’s campaign manager, Anne Caprara, said that “everyone is in good spirits.”

Before Pritzker addressed the crowd Tuesday, his running mate for lieutenant governor, Juliana Stratton, gave remarks to the crowd.

This will not be easy,” she said. “Bruce Rauner is a desperate man and in his desperation, he is going to do everything he can to distract from his unprecedented record of failure.”

Pritzker ran a campaign focused on a progressive agenda aimed at ousting Rauner and standing up to Trump. Pritzker has called himself the jobs candidate and is overwhelmingly pro-union.

During the race, Pritzker has had to fend off a multitude of attacks. He first was shamed for ripping the toilets out of one of his mansions in order to exploit a loophole and receive a substantial tax break.

Pritzker pointed to the fact that both Kennedy and Rauner had also sought property assessment appeals. Shortly after, Pritzker gave his campaign another infusion of cash to the tune of $7 million.

Next, there were the FBI wiretap ads, in which Pritzker was heard conversing with then-Gov. Rod Blagojevich. In the tapes, there are backroom dealings regarding possible political appointments for Pritzker and the filling of President Barack Obama’s vacant Senate seat.

Pritzker said that he regretted what he said on the tapes and asked the voters to look at his record instead. A couple of weeks later, Pritzker gave his campaign another $7 million dollars.

But the wiretappings would continue to plague Pritzker, with another tape coming out in February that heard Pritzker calling Secretary of State, Jesse White, the “least offensive” option if Blagojevich was “forced” to appoint an African-American.

Pritzker went on an apology tour and spent the next few days touring African-American churches and rounding up support from key members of the African-American community. A week later, another $7 million dollars from Pritzker was given to the campaign.

Most recently, Pritzker was discovered to have offshore investments in the Bahamas, and when confronted by reporters he refused to address questions and instead stayed out of the limelight.

But the barrage of negative press was not enough to convince voters that Kennedy or Biss were the best option to compete with Rauner.

Kennedy addressed his supporters shortly after learning that the election had been called in favor of Pritzker.

“We called him out, we ran millions of dollars of ads, we ran campaigns to try and beat him, and every time he battled back,” he said. ”The voters of Illinois have spoken and now we must follow their lead and give Mr. Pritzker the support he has earned.”

Biss has echoed sentiments of banning together to beat Rauner in the general election saying that he congratulated Pritzker on the victory despite their differences over the course of the campaign.

“We agree on one important thing,” he said. “The absolute essential need for the future of our state for us to come together and defeat Bruce Rauner.

Pritzker now sets his sights on the general election in November where he will face a wounded Rauner — who was able to stave off a surprise attack from Rep. Jeanne Ives, of the 42nd district. It is already being forecasted as the most expensive gubernatorial election in the nation’s history.

Both candidates have massive warchests and the election spending could run into the billions. During the primary race, Rauner’s campaign did everything possible to prevent Pritzker from securing his party’s nomination. Many of the attack ads against Pritzker were paid for by the Rauner campaign.

Pritzker was not afraid to score political points by throwing mud at Rauner throughout the campaign. He ran several ads imploring voters to help him beat Rauner, and he was quick to call the out the governor for, what he says, is a failed state.

Toward the end of his victory speech, Pritzker took aim at Trump and Rauner one more time.

With seemingly no end in sight to an unprecedented level of spending, it appears that Pritzker is “ready for the fight” that could cost him.