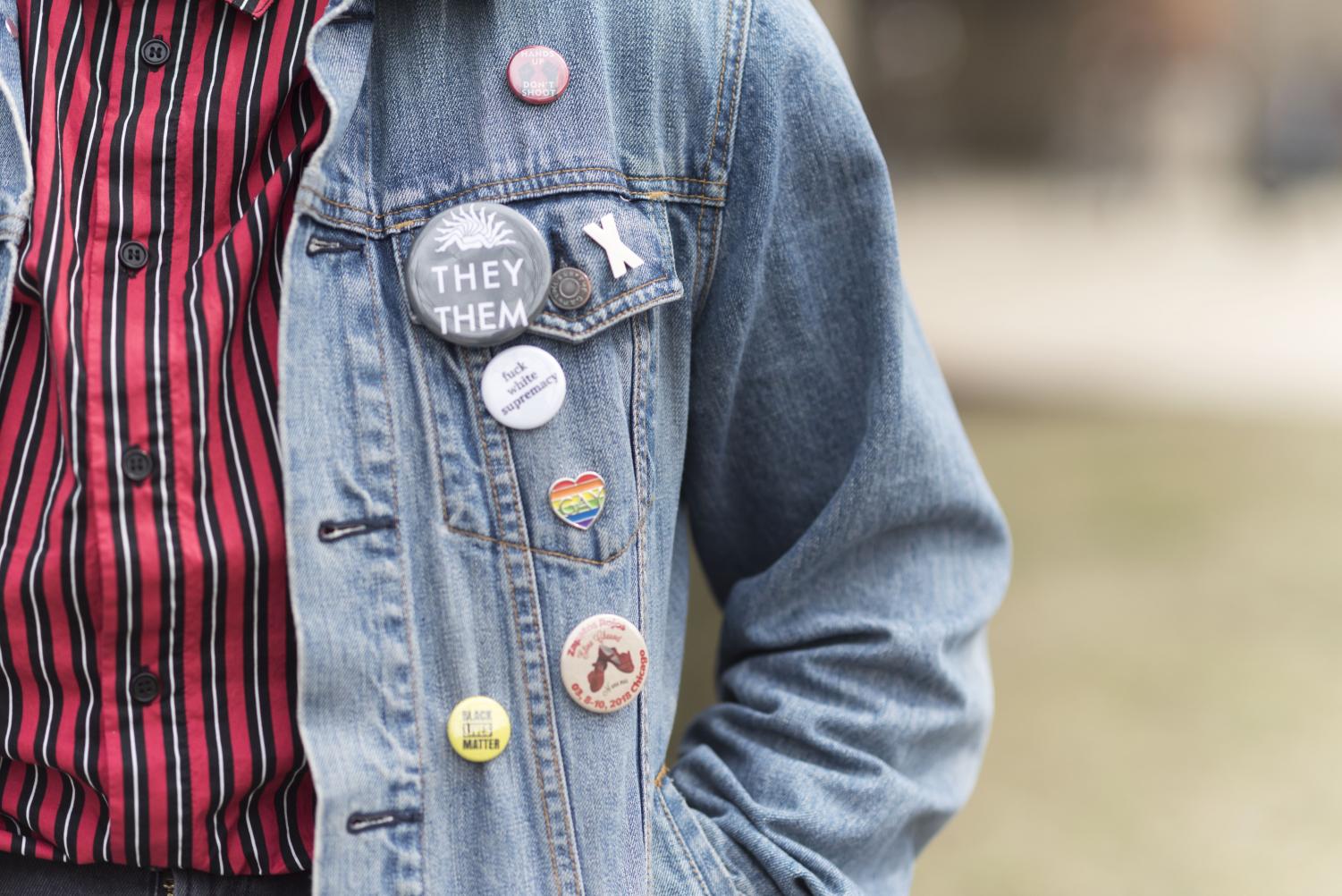 Blurring the binary: Bringing nonbinary identities to the main stage

Rivkin identifies as nonbinary, which means they don’t identify entirely as a man or a woman and use they/them pronouns as opposed to he/him or she/her. They are currently the only out transgender acting student in the audition pool for juniors and seniors at The Theatre School. In May, they will star as Blue in the world premiere of “Growing Up Blue” on the Fullerton Stage.

“Growing Up Blue,” written by Theatre School alumna Chloë Orlando, tells the story of a young teen in a small town grappling with gender identity, family and what is means to always be in a state of transition. The main character, Blue, who was assigned male at birth, navigates the complexities of gender identity and what it means to be different through an oftentimes comedic and heartfelt lens.

For Rivkin, playing Blue is important not only because of the size of the role, but also because the role is an opportunity to authentically represent their community in a mainstage production.

“I’m really thrilled to be able to actually represent a community that I’m a part of,” Rivkin said.

Rivkin is one of several nonbinary students at DePaul, and that population is growing in college campuses across the country. The 2013 and 2015 Minnesota College Student Health Survey found that twice as many respondents identified themselves as “genderqueer” or “another gender” instead of the binary “transgender.”

“Growing Up Blue” was Rivkin’s hardest audition because it hit so close to home. “I had never wanted a role so badly,” said Rivkin.

Rivkin discovered they were nonbinary during their sophomore year of college. They tried on a few labels, butch and lesbian specifically, but they didn’t feel quite right. Rivkin had friends who used they/them pronouns, and these pronouns increasingly became a part of their everyday speech. Eventually, Rivkin tried they/them pronouns for their own self.

At the end of their sophomore year, Rivkin started using they/them pronouns and came out to the entire Theatre School. “For the most part people have been super-duper supportive,” Rivkin said. “There’s still a lot of misgendering that happens constantly, but I trust that most people mean well.”

When Rivkin came out, they were worried about their future as an actor and considered quitting acting altogether. The theater industry is competitive, but it’s also based in binaries — making  roles for transgender actors even more scarce.

At the 2017 Wrights of Spring festival, Rivkin acted in two new plays that featured nonbinary stories: “Ruck” by Frankie Pedersen and “Growing Up Blue.” This was the first time they saw a future for themselves in this industry. Playing a transgender role in the actual production is affirming for Rivkin and gives them hope for the future of the industry.

“The more I started getting out to the community and actually meeting (transgender actors) professionally working, I realized that I could actually work in this industry as my authentic self,” Rivkin said. “Maybe there is a space for me.”

Jenni Holtz is tired of explaining who they are.

“I’ve always felt confused by gender,” Holtz said. Holtz went to an all-girls Catholic high school and didn’t have the language for why they felt out of place. When they came to DePaul, they were exposed to people who identified as nonbinary and used they/them pronouns and found home in spaces that affirmed those identities.

“I came to college and realized that people used different pronouns and I’m allowed to do that, too,” Holtz said. “It took me a while to let myself do that.”

Holtz fluctuated through several labels. They thought they were a butch lesbian and experimented with using both she/her and they/them pronouns. The more they used they, the more comfortable they felt in their own skin. “Why does it feel like a hug when people call me they?” Holtz said. “I realized that that’s what makes me happy and that’s what I should do.”

“In women’s and gender studies and the Women’s Center, we make an effort to affirm and welcome all genders and identities,” said Ann Russo, associate professor and director of The Women’s Center. “In women’s and gender studies classes, some of us welcome students to identify their pronouns if they wish. This enables everyone to recognize people’s identities across, outside, and beyond a gender spectrum.”

In WGS, gender and pronouns aren’t assumed or questioned, providing a comfortable space for anyone to try on different labels.

“WGS is nice because I don’t have to explain myself as much,” Holtz said. “Part of me wants to explain it to everyone and get them to see that I’m a trans person and I’m nice — I don’t bite. But I also am tired.”

In non WGS classes, however, Holtz often finds themself having to come out everyday. “It’s just a point of annoyance more than anything else because I know that it’s not coming from a place of hatred,” Holtz said. “But it’s still not fun.”

“You wouldn’t want me to use the wrong pronoun for you so why shouldn’t you use my pronouns?”