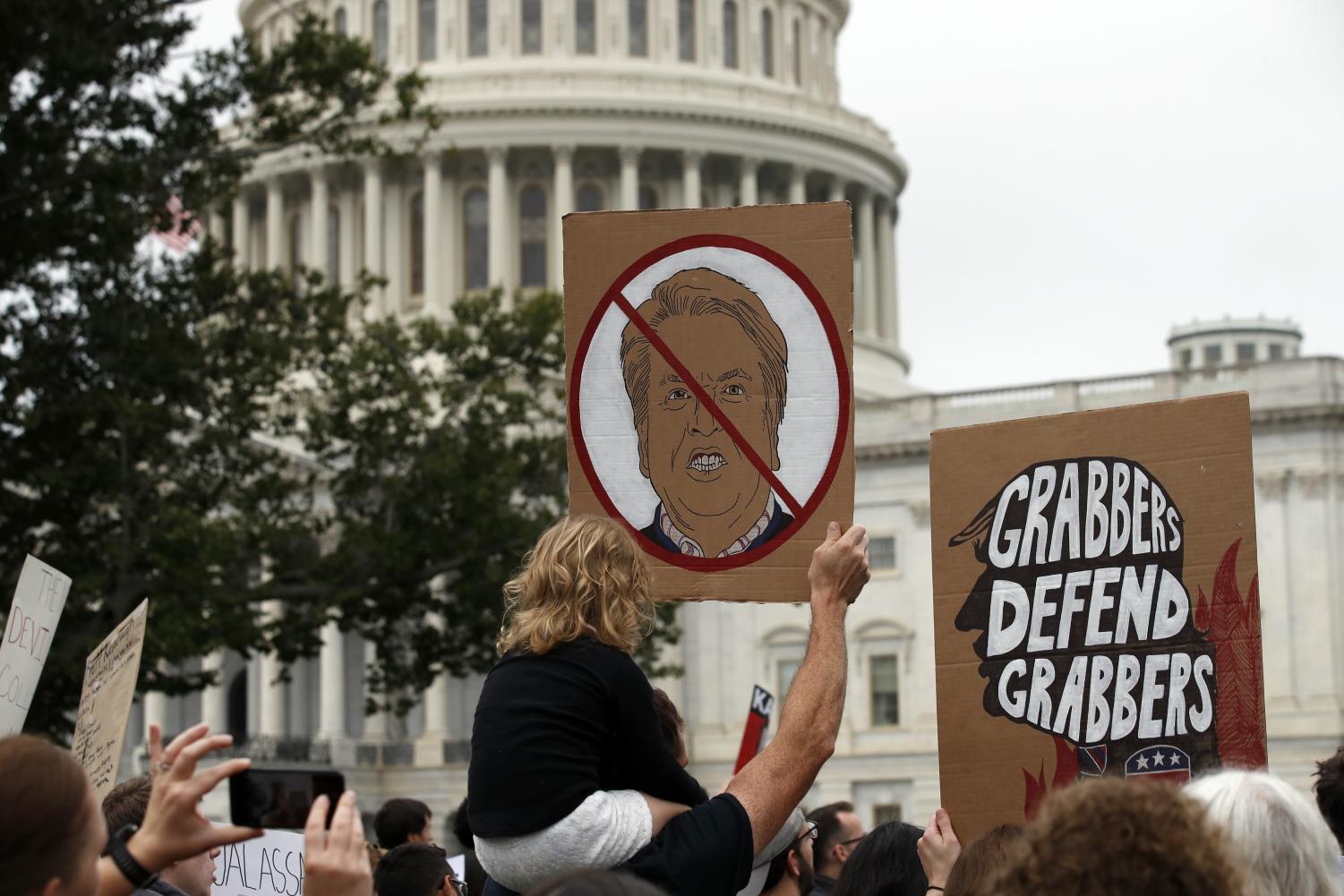 Meeting in the middle

To rightfully support sexual assault survivors after the Kavanaugh vote, offering them a platform to speak is a step in the right direction

As Brett Kavanaugh makes his way into his new seat in the Supreme Court, women are confused, fearful and jaded. The immense media coverage, infamous beer talk and intensity of Christine Blasey Ford, PhD and her testimony fooled us into thinking a denial from the Senate was possible. The road for improved discourse on sexual assault and a secured Roe v. Wade was well underway. But the “shock” that may have been expected is not the case for many Americans. Kavanaugh’s approval might upset us, but the reaction is not “shock.” It is more so disappointment but not surprising.

The systematic advancement of morally corrupt men by men just like them is nothing to be shocked over. What shocks women is not this case’s corruption or lackluster investigation, but that those in power think women and survivors of sexual assault will be able to accept this situation and move on. The news cycle will carry on and a bigger story will break. Many could forget Kavanaugh’s approval and even forgive him. But survivors are not forgetful and certainly not forgiving under these circumstances. After witnessing an accused man gain a position of power, where he will be able to police victims of sexual assault, the processing time can be longer than others, with some not wanting to talk about the subject at all.

At this time, it is imperative to listen to survivors. Though Ford braved this media spectacle with determination and poise, some survivors don’t want to come forward. Overpowering forces try to silence victims, whether that be a subconscious dialogue or a conscious person. Today, survivors feel weak and silent, so respectful empathy and empowerment are both fundamental, if not necessary as an ally. This conversation affects survivors, but understanding how to both keep the discourse going and respect their wishes will make the difference in future cases such as this.

To find and execute this balance, allies can do a few things, with the first being believing survivors. A survivor bringing their assault public may provide comfort and show bravery, yet they must take into account that someone could not believe them. Even though false rape allegations are rare, as most scholars agree that an estimated 2 to 10 percent of rape allegations are proven false, the accusation is tossed around to intimidate and silence them so their abuser can walk free from consequence. The reality is that most people do not lie about assault, but they often feel pressured to keep it hidden for safety, personal and societal reasons. Dr. Ford felt that she could not tell her family because she was scared of the repercussions of being at a drinking party.

Believing survivors is one solid way to support, but putting in actual work is no more difficult. Protests are an effective, visual way to show support and gain insight on how survivors may be feeling, but their fleeting nature makes the public quickly lose interest. Surprisingly, a more effective support method would be to register to vote. Really. Voting in the midterm election is a very easy, but often forgotten way to continue the discussion by being involved in local government.

“Being a good citizen is super important when you’re trying to support marginalized groups,” said Carolyn Matyus, a Columbia College graduate with a degree in business. “Donating to Planned Parenthood, domestic abuse charities, women’s homeless shelters and other places like that can make a huge difference even when it feels like we can’t change our government.”

Natalie De La Torre, a 22-year-old political science pre-law student at the University of Illinois at Chicago, said that best way to comfort a survivor right now is not through the tradition catch-up conversation or a large protest.

“We should channel this rage into action and not only practice our civic duties and got out and vote but perhaps think about pursuing professions that could lead to a change,” De La Torre said. “Though I’m enraged, this motivates me more to pursue law. We are the future, and we will definitely not forget this.”

Each ally cannot be expected to immediately apply for law school, so researching the Supreme Court, their Anita Hill history and Justices themselves bridges the gap between remaining pleasantly ignorant to be able to see the flaws in our own system and how they repress certain groups.

Though it seems trivial, checking up on your friends to see how they are reacting can provide them with immediate comfort and support, even if they struggling. Keep up with them, and ask them how they are feeling often. They may not want to talk, but the offer will make a difference. Knowing that they have someone during a time as depressing as this may not change any laws or hold abusers accountable, but this gives them a platform where they can be heard without fear of wrongful accusations.

It is easy to get lost in countless feminist activists demanding discourse on this topic, but what we need to remember is that this is a hard time for everyone, especially those who have been assaulted. Choose your words carefully when discussing Kavanaugh

Even though a petition for his impeachment was passed on social media, gathering over 125,000 signatures, and protests ensued in major cities, an accused abuser still sits high on one of the most respectable seats in the country. While he sits, the accountability for abusers dwindles, and survivors can feel their voices being silenced. By posting, sharing and talking about this messy mistreatment of survivors, we can demand an open dialogue for survivors to feel solace whether they reveal their trauma or not.