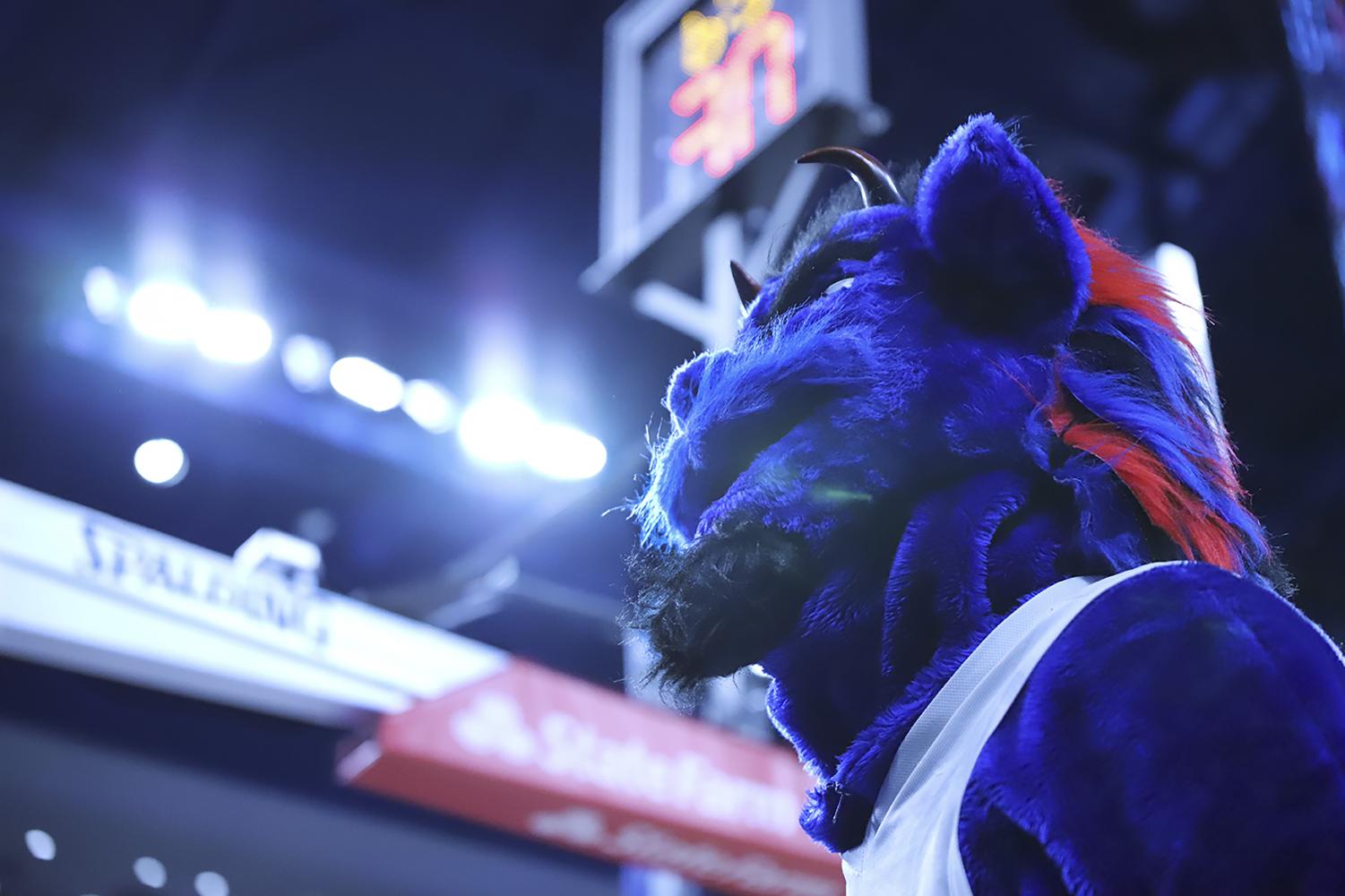 DIBS, the face of school spirit at DePaul, still can’t drink at Kelly’s

The “Demon in a Blue Suit,” known to most students as DIBS, was conjured at last Sunday’s women’s basketball game against Seton Hall to blow out his birthday candles for his 20th birthday. In just one more year, DIBS will be able to legally enjoy a beverage with students at Kelly’s or McGee’s.

Originally, DePaul’s mascot was Billy the Blue Demon, a smiling creature with a goatee. But in 1998, Pat Kennedy, who was head coach of men’s basketball, was ushering in a new era of DePaul Basketball.

“We looked for a fresh, clean, new look with our logos,” said Karen Loicano, who is responsible for managing DIBS.

DIBS has been one of the trademarks of DePaul University since 1999. Students and teachers seem to love being around the Blue Demon, and fans get especially excited when he appears at sports games.

— DIBS, Demon in the Blue Suit

“My favorite part of going to games was always seeing DIBS,” said Ilana Blattner, a former member of the Blue Crew, DePaul’s spirit squad. “He’s just got so much energy, and even nowadays, I always have to stop and say hello when I see him walking around campus.”

Even DIBS gets excited when he sees students and fans around campus because he knows that by walking around campus or being at the men’s basketball games, it makes other people’s days when they see DIBS and get a high-five from the mascot.

“[DIBS] is the great equalizer; you can go up to anyone and high-five them, interact, someone will give you a smile,” DIBS said. “I love walking down the street and just wave to whoever I see. It’s just fun. You can tell that you’re brightening someone’s day or getting people excited, but the kids are always really fun. Some of them come to game after game and they are really excited. It pumps me up.”

Francesca Santelli, a freshman at DePaul who regularly attends sports events, said that DIBS plays a big part in energizing the crowd.

“I think that the spirit of the school is uplifted when he is around,”  Santelli said. “Because he runs around and has that constant smile that can’t help but make you laugh or smile.”

Those who want to don the famous Blue Demon costume must first go through an in-depth process that includes a phone interview and a physical tryout.

“When we try out, we ask students if they’re claustrophobic because it’s a really tight fit around the mask,” Loicano said. “Additionally, there are certain requirements, such as you have to be a full-time student, have to pass a physical with our sports performance department to make sure you’re healthy enough and physically fit enough to be in a suit. Then you have to have this desire, the school spirit, enthusiasm and commitment to do it.”

DIBS’ job is both to create school spirit and evoke energy from the fans during games that can hopefully trickle down to the players. No matter how big or small the crowd, DIBS approaches every game the same.

“Every time I get out there on the court I go to the students. I go to the fans: It’s where I get my energy,” DIBS said. “Honestly I feel the team gets a lot of energy from the fans. So, I see DIBS, the spirit team in general, the dance team and the band… we all are working together to channel that energy from the fans to the team.”

Students who haven’t met DIBS yet will have their opportunity during Blue Demon Week, which begins next week and runs through Feb. 2. The mascot will be walking around campus every day, and he’ll make appearances at all three basketball games during that week, including Villanova on Wednesday, Providence on Saturday and Marquette on Sunday.