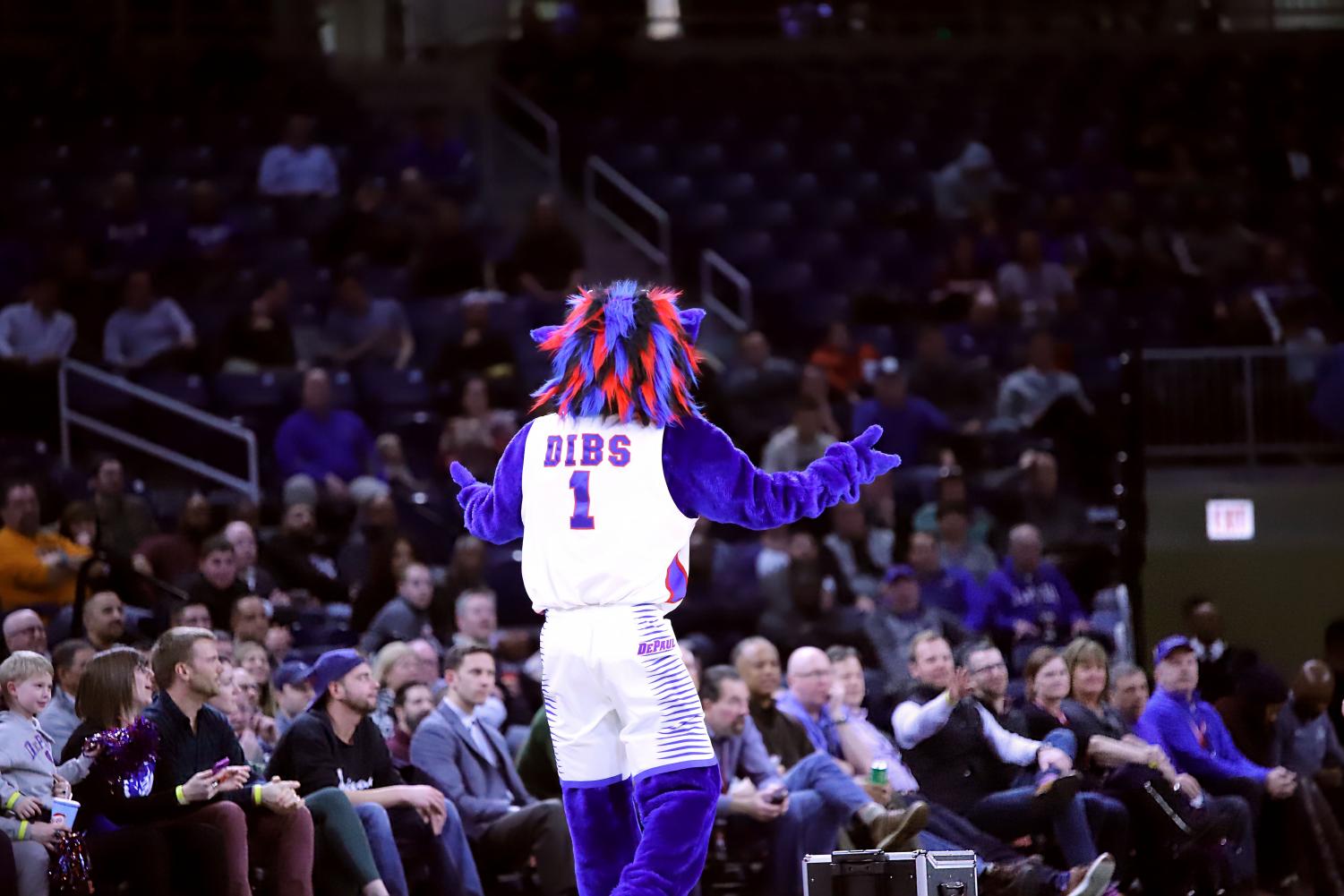 DePaul women’s basketball coaching legend Doug Bruno exits the Sullivan Athletic Center, walking south on Sheffield Avenue. Two female DePaul students walk in the opposite direction past Bruno. One of the women says to the other, “That’s the women’s basketball team’s head coach.” The other responds, “Really? Wow. I know nothingabout this school.”

Besides the eye-catching mural of St. Vincent de Paul on McCabe Hall, Bruno is one of the most visible figures at the university – yet this is an example of the lack of athletic recognition at the nation’s largest Catholic university in the country’s third-largest city.

School spirit is a sense of identity and community shared by the students, faculty and alumni of an institution. People can show school spirit by wearing their school’s apparel or colors on and off campus.

DePaul’s Blue Crew, the official student section of the Blue Demons, personifies school spirit at all athletic events, but their foremost concentration is at basketball games.

Michala Leber, a junior and president of the Blue Crew, says school spirit at DePaul goes beyond being in the stands.

“Having school spirit is being proud of being a student at DePaul,” Leber said. “People do that through going to basketball games, community outreach and joining clubs.”

Representing DePaul throughout the Chicagoland community is an important idea to understand in the discussion of school spirit at the university, but athletics is typically how universities rise to prominence on a national stage.

I don’t necessarily define school pride as wearing blue and red every day. I’d prefer to represent the university with my character when I am on my way to and from campus.”

As school spirit can derive from the success of athletic teams, DePaul may lack in that department, said senior Tim Stebbins, assistant general manager of RadioDePaul Sports.

“You might not be proud of DePaul as a student because the school doesn’t have a whole lot to be proud of at the moment,” Stebbins said. “The women’s basketball

program is something to be very proud of, but many schools rally around the men’s programs. If men’s basketball was competitive on a national level, I think students would be more proud to represent DePaul.”

Competing with local universities such as Loyola, DePaul students’ school spirit may be difficult to verify with the success of other Chicago universities’ athletic programs.

Last March, Loyola University’s men’s basketball team was one of the Cinderella stories of the year in the world of sports.

The team fought its way to the Final Four in the NCAA Men’s Division I Basketball Championship. Because of the run the Ramblers made, school spirit is alive and well with our neighbors in Rogers Park, said Summer Scott, a Loyola freshman.

“We care a lot about our sports at Loyola, so it’s easy for me to take pride in my school,” Scott said.

The Ramblers’ magical run was not just a boost for student’s morale, but the Final Four appearance also enabled sports fans in the city of Chicago to represent a local university on a national level.

Laurence Holmes, an adjunct professor of media at DePaul and host at 670 the Score and NBC Sports Chicago, said that the Final Four run was an important story in the Chicago sports landscape at the time.

“It was great to see the public get behind Chicago’s team,” he said. “And the city really needed it.The Bears had been awful for five seasons. The Bulls were in rebuild. The Blackhawks had fallen off the table. The city was hungry for anything to get behind.

A successful athletic team can do more than just enhance school spirit at a school.

“I have friends who work at Loyola and the exposure that they got on the national stage was immense,” Holmes said. “Enrollment will go up.It looks like DePaul’s team is maybe on the verge of a breakthrough. If they even come close to being a tournament team, they will see a similar reaction. Everyone is rooting for them to return to relevance.”

School spirit does not have the same meaning to everyone. Ethan Brady, a commuter student, says he rarely notices DePaul apparel on public transit, but he thinks students should show their school pride by representing DePaul to the best of their ability while commuting.

“I personally never wear any DePaul apparel,” he said. “I love the university, but I don’t necessarily define school pride as wearing blue and red every day. I’d prefer to represent the university with my character when I am on my way to and from campus.”

While many students express their school spirit at athletic events, others do not rely on athletics alone to display their affection for DePaul.

To some, wearing DePaul apparel is a way to show spirit. In 2015, DePaul’s Student Government Association created an affinity marketing campaign to motivate students and faculty to represent the Blue Demons on Thursdays by wearing blue. Over the past couple of years, Student Government Association  has distributed, ‘On Thursdays we wear blue’ T-shirts at falland winter involvement fairs.

A university just north of the city limits, Northwestern, differs from DePaul because it has a campus where students come together in a campus community.

“Northwestern’s physical structure is what fills the holes that DePaul is missing with its student body,” Judelson said. “There is a campus where beyond the gates, little student interest peaks.With DePaul having two centralized locations in the busiest parts of the city, it’s no wonder students don’t behold the same amount of pride in their school, they are too busy in the city exploring everything else Chicago has to offer.”

Hunter Gerard, a senior and the executive vice president of SOA for Student Government Association, says DePaul’s school spirit is on a different wavelength compared to other schools.

“It’s rare that our entire student body is in the same room at the same time,” Gerard said. “If your only conception of unity is a massive stadium filled with painted faces and noisemakers, the unity we have – in our commitment to the mission, in our deep care for our city, in the many venues and organizations that our students find community in – may feel just a bit different.”

Students who are part of different organizations on campus make impactful efforts in various different ways. However, there is one thing all DePaul students have in common, and that is getting to class.

For many students, getting to class will be a memory in itself. Nearly 90 percent of the total population commutes or lives off campus, according to the Division of Student Affairs.

With only 10 percent of students living on campus, it may be challenging for commuters to develop relationships with their peers aside from in-class responsibilities.

Stebbins, a commuter from the Portage Park neighborhood, says making friends at DePaul can be difficult.

“You hear these kids in class talk about their one- to two-hour commutes from the suburbs, so it is even more challenging for those students to find the time to meet new people,” said Stebbins, whose home is six miles from the Lincoln Park campus.

James Stewart, the director of Adult, Veteran, and Commuter Student Affairs at DePaul, leads the charge in assisting new students with their commute to and from their homes around the Chicagoland area.

Stewart said that about 40 percent of students commute from suburban neighborhoods.

A possible reason as to why students may not participate in events on campus maybe because of the lack of discounts for DePaul students who ride the Metra rails everyday.

Metra trains cost the same for college students as for normal passengers. Because of the pricing of Metra tickets, it may serve as a reason for why students do not spend as much time on campus. This is an issue Stewart has confronted with DePaul Student Government Association members in the past.

“This issue arises from student concern regularly. A few years ago, DePaul SGA leaders and Student Affairs leadership sent a letter joint with several other Chicago universities advocating Metra Board to consider this. Unfortunately, the board did not act,” Stewart said.

With two campuses in a bustling city, many students are proud to call this one-of-a-kind city home, no matter what the issue may be. Nahal Hashemian, a senior and president of DePaul’s Student Government Association is proud of her unconventional college experience.

DePaul school spirit may not stem from the success of athletic teams, but it may relate more to the story of being an aspiring professional in a large city. Students live in areas around the city and surrounding suburbs. With two campuses, it may not be possible to designate one area where DePaul students come together as one. One thing they take pride in is representing the city the university is located in.

The reputation of a school is carried on by those who past attended. The Office of Alumni Relations reported that they believe our alumni has a strong foundation.

“Alumni engage with the university through a variety of ways,” said Sarah Albert, an assistant director in the Office of Alumni Relations. “Many alumni attend events, both locally and regionally, throughout the year. Additionally, ways alumni can make an impact on the university are highlighted at these events and through all alumni engagement efforts including helping students find internships and jobs.”

At the moment, DePaul has two campuses, advancing athletic programs and a 90 percent commuter student population. The school spirit at the university does not lie solely in athletics.

People believe it lacks in relation to all three of these things. Without singling out the athletic department and taking a broader perspective at DePaul’s student body and community, the subject of school spirit at DePaul remains a mystery.

There are different variables that need to be explored or explained. Moving forward, is school spirit an issue because of the lack of student involvement? Do commuters need more resources to become more involved? Will people be happy when Wintrust Arena is sold-out with a top 25 ranked men’s basketball team featured on an ESPN primetime game?

The answers remain unclear, but what the DePaul community does know is the fact that we do not compare to most universities because of our uniqueness in having two campuses, a substantial commuter population and our main athletic venue being located miles away from Lincoln Park, where the majority of dorms are located.