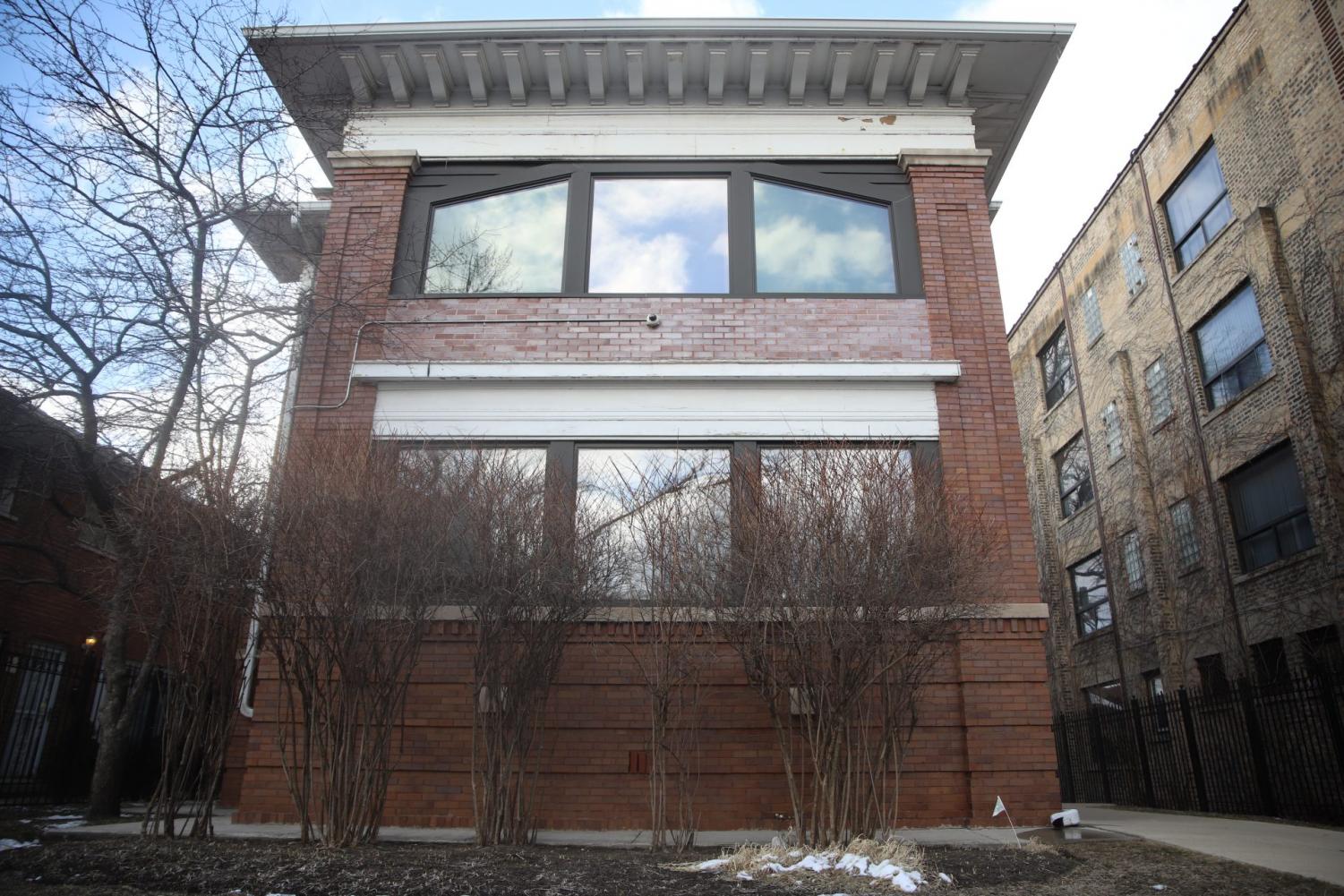 A child detention center located in Rogers Park on the city’s Far North Side, one of five such properties managed by Heartland Alliance. (Xavier Ortega | The DePaulia)

A child detention center located in Rogers Park on the city’s Far North Side, one of five such properties managed by Heartland Alliance.

Immigrant children being detained across Chicago

A controversial new Trump administration policy has sharply reduced the number of immigrant children detained in five Chicago shelters run by Heartland Alliance, a non-profit that has been under fire from activists for its role in harboring children detained without parents or legal guardians.

The five Heartland shelters have a capacity for nearly 400 children, but now care for only 92, according to an executive of the non-profit, who blames President Trump’s Remain in Mexico policy, which requires refugees seeking asylum to apply in Mexico.

Jim LoBianco, senior director of SAFEty Initiatives at Heartland Alliance, said the low capacity is the result of the political climate.

“I would prefer to have 381 because of what we know, the trauma and the care that these kids need,” LoBianco said. “And we think that this low census is artificial and is being fabricated as a result of political policies.”

The Trump administration continues to enforce the policy while it appeals a recent federal court decision striking it down.

The drop in Heartland residents began in October, according to LoBianco.

Two of the Chicago facilities are in the Rogers Park neighborhood; the others are in Bronzeville, Englewood and Beverly. Heartland gets most of its funding –more than $50 million –from the government, according to documents filed with the Internal Revenue Service.  Most of its Chicago detention centers are modest buildings that blend into neighborhood surroundings, but they are ringed by locked iron fences and security cameras.

In promotional literature, Heartland says, “it is deeply committed to the fair treatment of refugees and asylum seekers.” The non-profit contracts with the federal Office of Refugee Resettlement to manage centers for “unaccompanied alien children.” These are children who cross the border alone, with other minors or with adults who are not their legal guardians. Some crossed the border with families or guardians but were separated during ICE enforcement actions. According to Heartland,  the children come from 51 countries, including India, Bangladesh, Nepal, China, Romania, Brazil and several African nations.

Heartland says its centers in Chicago are, “run by multi-lingual human service staff: teachers, therapeutic clinicians, case managers” and that its “primary mission is child welfare/well-being through a trauma-informed approach.”  LoBianco, who holds a master’s degree in counseling and human services from DePaul, said that the children receive medical care from Chicago providers including Lurie Children’s Hospital, LaRabida Children’s Hospital and the Shirley Ryan Ability Lab.

But interviews with immigration experts and testimony from a former Heartland resident paint a bleaker picture: children on strictly regimented schedules who have little freedom behind locked gates and who suffer serious psychological trauma from being separated from their families.

One former Heartland detainee, a teenaged boy named José, spent nearly a year in four different detention centers around the country, including those in Illinois, Texas and Oregon. Now 18, he faces deportation as an adult. José said employees at the facilities tried to get any information they could from the children.

“If they ask you questions and you don’t answer, they tell you, you will never see your family again,” he said.

While some of the information is for reunification purposes, José said he believed there was an ulterior motive.

Heartland officials say they do share information with the Office of Refugee Resettlement, part of the U.S. Department of Health and Human Services.

In Heartland’s Chicago detention centers, the average stay for children is about 45 days except in “unique circumstances” such as medical conditions, according to LoBianco.

“We absolutely have had kids who have stayed with us where the parent or the guardians actually said, ‘I want the child to stay with you until they’re fully healed,’” LoBianco said.

“Yet they end up functioning that way because people are forced to stay in them for a long time in some cases,” Tirres said.

In more extreme cases, Tirres said they can serve as “de facto prisons.”

“In fact they are worse than prisons,” Tirres said. “In many cases, because detainees do not get the benefits like being able to see family, use a library. It makes it much, much harder to defend your case against deportation if you are in a detention center because it is so much harder to see your attorney.”

LoBianco acknowledges that children who suffer on their journeys to the United States can experience further emotional damage while detained. “Even while you can provide a layer of good, there is trauma being experienced by the child while in care,” LoBianco said. He said children get counseling from on-site staff and visiting professionals.

Natasha Varela, director of child-adolescent family services at Northwestern University’s Family Institute, said these artificial conditions can impact a child’s cognitive development.  Additionally, the development of stress-related disorders are more likely for detainees. Varela said the other “extreme” impacts on children depends on other variables, but the risk for detained children is increased.

“There’s a risk of self injury,” Varela said. “There’s the risk of addiction. There’s risk of suicidal behavior or suicide risk. So all of these things can increase, I think, depending on other variables, but I think that certainly children are at higher risk as compared to maybe those living in a home with a parent or parents or caregivers.”

LoBianco said such expressions of trauma have been infrequent at Heartland.

“The trauma that children walk in the door get expressed in many ways, self-harm and severe suicidal ideation being one of them,” LoBianco said. “It is infrequent, but the way we address it is case by case from a medical and psychosocial perspective to make sure that the child is both safe and healing first and then an environment where they can go from just being safe and healing to actually thrive.”

Over the last two years, immigration activists have protested outside Heartland shelters, at an employee recruitment event in Pilsen, a fund-raising gala and outside the home of a Heartland executive. Groups including Free Heartland Kids, Organized Communities Against Deportations, the Illinois Coalition for Immigrant and Refugee Rights, the Little Village Solidarity Network and the Rogers Park Solidarity Network have also participated in protests calling on Heartland to shut down its Chicago detention centers.

But Heartland executives say the alternative is worse. LoBianco asks, “How will one child’s life be better if we stop doing this work tomorrow?” Heartland promotional materials, including videos, contrast the treatment they provide with border facilities run by ICE that have cramped conditions in prison-like settings.

Last May, after a series of investigations from ProPublica, Heartland shut down four detention centers in Des Plaines. The ProPublica investigations revealed negligence that included allegations of improper supervision, children having sex in common rooms and detainees attempting to run away during field trips.

The detention of children has increased dramatically across the country since the Trump administration launched its “zero-tolerance policy” at the border that led to thousands of family separations. Adults were moved to federal detention centers, and children sent to facilities contracted by the Department of Health and Human Services.

In 2018, bowing to intense political pressure, Trump signed an executive order ending the policy of separating migrant children from their parents.

But the problem has only worsened with a record surge of unaccompanied minors over the last few years. In fiscal year 2019, immigration agents apprehended more than 76,000 children at the border, an increase of more than 50 percent over 2018, according to U.S. Customs and Border Protection.

The Trump policies upended the so-called Flores agreement (1997 Flores v. Reno) that set a 20-day limit for holding children and requires the government to release children in a timely manner to their parents, other adult relatives or licensed programs. It also requires immigration officials to give detained minors a certain level of adequate food, drinking water, medical assistance and other quality of life areas.

“Under the Obama administration, there was a policy of prosecutorial discretion, which meant that ICE officers and lawyers would not go after the cases of families and students and children,  but after dangerous criminals,” Tirres said. “That is out the window now. They go after anyone and everyone. This is what is known as the ‘zero tolerance system’ – everyone is a priority for enforcement.”

In response to criticism that Heartland Alliance benefits from these policies, including an exponential increase in its payments from the federal government, the non-profit insists that it opposes the Trump crackdown on undocumented immigrants.

“We believe that the facts are very clear that this presidential administration is weaponizing children, it is using children against their own interests and against the interests of their families.” LoBianco said. “That is repugnant. It is inhumane. And it’s a crime to find ourselves in the midst of that and then try to figure out how to navigate.”

Nonetheless, Heartland Alliance is seeking a new, three-year contract with the Office of Refugee Resettlement that would provide the Chicago non-profit up to $45.5 million each year.

LoBianco said the contract has not yet been approved, but the organization is still seeking it.