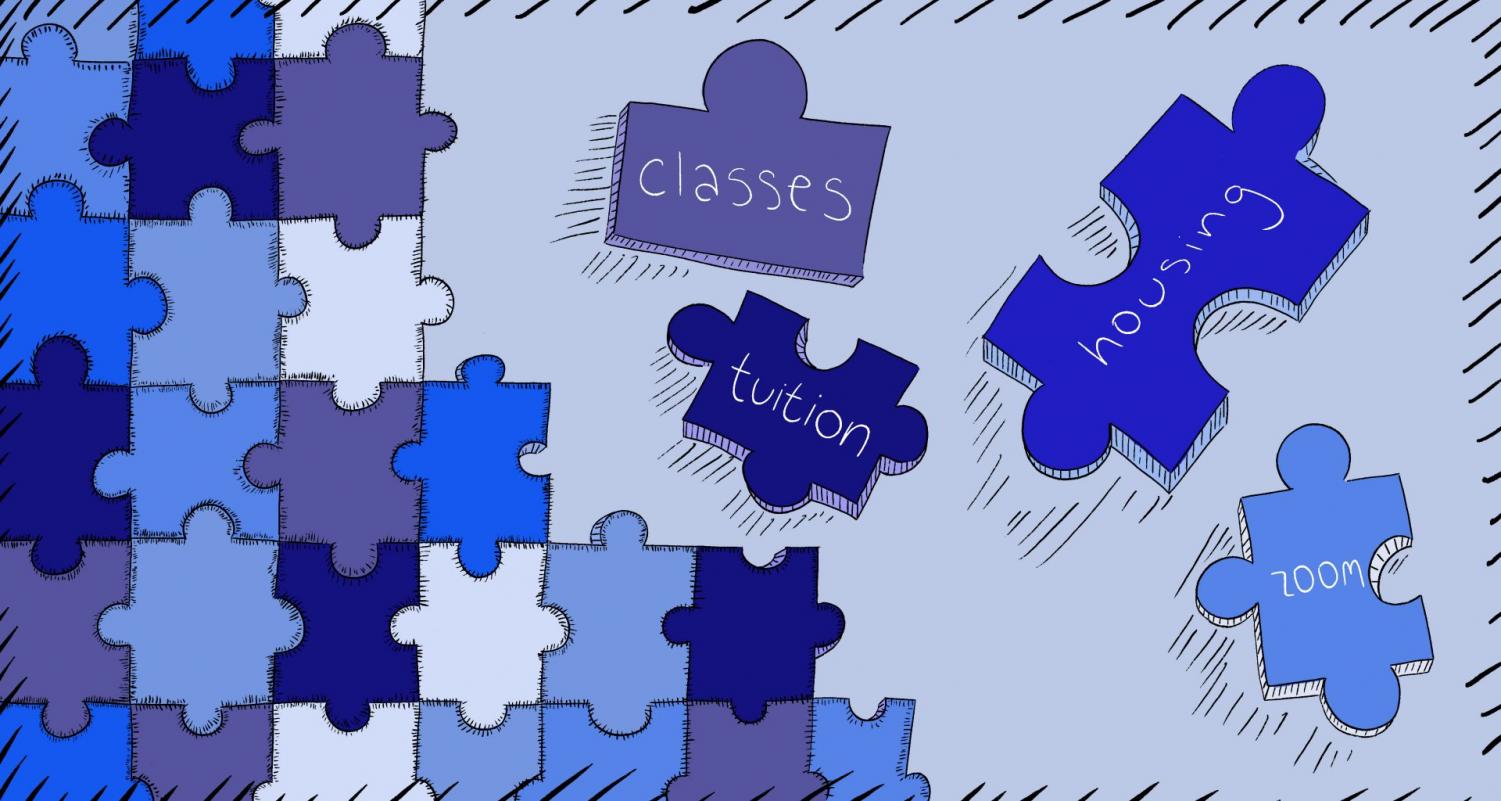 Social distancing from classmates in larger rooms, splitting classes into multiple rooms and “Zoom-ing in” from home — these are just a few of the ideas that top administrators are weighing for students’ return to campus this fall.

At a town hall on May 21, administrators took questions from faculty and staff and discussed what next quarter may look like. While many decisions are contingent on fall enrollment, the university is considering several options already.

DePaul plans to resume face-to-face instruction for “select courses” this fall, assuming that corresponds with state and national government guidelines. Classes that require in-person interaction, like music, theatre and lab courses, are being prioritized.

The university is looking at moving classes into larger rooms, splitting classes into multiple rooms and working on hybrid models for those classes. They’re also equipping classrooms with new technology to allow students to “Zoom in” to increase social distancing and give students who can’t make it to class another option.

Some nationally discussed ideas, like Plexiglass shields around professors’ podiums, haven’t made the cut.

“The Plexiglass shielding is an interesting idea that we’ve seen other institutions raise, but from a practicality standpoint, I’m not so sure,” said Jeff Bethke, chief financial officer and head of the COVID-19 response team at DePaul. “I mean, just from a standpoint of [if] you put a Plexi-shield in front of a 24-inch podium. Meanwhile, the faculty member is working 20 linear feet of whiteboard. It doesn’t really — we want to do things that matter and that just aren’t theater.”

Regardless, some form of social distancing in classrooms is almost certain, and students’ on-campus footprint will be “significantly reduced.” Students will also be expected to follow the guidelines for protective gear.

“We expect we’re gonna be in a face mask mode in some form come the fall, but we intend to rely upon folks bringing their own face masks,” Bethke said. “We will probably have some supplies as a courtesy for people who can’t provide their own. But, you know, if you just think about the logistics of 25,000 disposable masks per day — we don’t have access to provide to those kinds of stocks.”

The university has also purchased 5,000 gallons of hand sanitizer as additional protection for students on campus.

“Part of me would love to put everybody in a bubble wrap and make sure that everyone is safe, but we are going to implement as many of these measures as we possibly can,” Interim Provost Salma Ghanem said.

It’s unclear whether students who do not wish to return to campus in the fall but still want to remain enrolled at DePaul will be given that option. Ghanem said that while coursework will be available remotely for some classes, it depends on the coursework individual students have left in their degree plan.

“It depends on the major of the student and it will depend where they are in their academic career,” Ghanem said. “So if you’re a freshman or sophomore, it might be a bit easier to find classes that fulfill your needs. I would say that as they move up through their career, it might be a bit more difficult … I cannot say that every option will be available, but then again, we did it in the spring.”

All of these ideas are still being discussed, and their implementation is entirely contingent on whether COVID-19 continues to spread. Students won’t know for sure about fall quarter details until the university considers all its options.

“It’s going to be just a matter of when we can fit all the pieces together,” Ghanem said. “It’s like a huge puzzle and every piece of the puzzle affects another piece. But the work is being done as we speak.”

The university intends to open its residence halls with reduced density. They’re currently modeling a 15 percent reduction in total capacity — but reductions vary “dramatically” from dorm to dorm.

The residence halls that will likely see the biggest reductions are those with community-style bathrooms. It’s also possible that one residence hall will be left fully open for quarantining purposes in case a student living in the dorms contracts the virus.

Cleaning in all residential facilities will be increased as well.

The plans for residence halls are based around guidelines from “Phase 4” of Gov. J.B. Pritzker’s Restore Illinois reopening plan.

While the plan for now is to bring faculty and staff who typically work from campus back in the fall, Bethke alluded to the idea that the future may hold more remote work options.

“As we restart campus and start bringing students back to campus, obviously more of that [faculty and staff] community, more people will have to come in,” Bethke said. “But there are lots of functions and people and jobs that are working every bit as effectively a work from home mode as they did prior to all of this.”

Keeping some faculty and staff remote is not currently saving the university any money — but could in the future, he added.

He explained that the university currently leases seven and a half floors of 55 E. Jackson, paying roughly $3.5 million a year in rent for about 600 people. Most of those 600 people don’t directly interact with students. In theory, those people could work from home more often or entirely. Still, it doesn’t solve the current problem at hand: the university needs money now, not later.

“That’s a great long-term planning strategy that could produce really good benefit for the university a couple of years down the road,” Bethke said of the possibility of making those employees remote. “But it doesn’t do anything for us now because all of our facilities, all of our five million square feet of space under that roof is all just sitting there empty.”

The university extended its work-from-home decision to July 17 regardless.

Further, hourly pay accommodations for student and non-student hourly workers will end on June 30. At that point, students and staff will be paid for hours worked.

Still, many of these plans and others rely heavily on next year’s enrollment.

International students are still being recruited, though. Ghanem said that alumni in China and India have been enlisted to connect with prospective students in those countries.

When comparing the its projection numbers from last year to this year regarding transfers, though, the university is 3 percent ahead.

Ghanem said that there is no plan at this point to reduce the number of adjunct or term faculty scheduled to teach. But if enrollment declines significantly more than expected, there is no guarantee their jobs are secure.

The number of students enrolled for fall may also affect diversity programs.

“At this time, unless there’s a catastrophic drop in enrollment, we plan to continue to serve our students as best we can,” President A. Gabriel Esteban said. “As the Provost pointed out, the big challenge we have right now is the uncertainty about enrollment.”

Bethke said the university will have a better understanding of its fall enrollment numbers by September 1.

Though much is still uncertain, the top administrators remained cautiously optimistic about the university’s financial standing going into fall quarter.

The university is on track to raise its second highest dollar value in its 122-year history, Esteban said, expecting to finish the year raising roughly $56 million.

Still, they expect to see a net tuition revenue decline of $49 to $65 million. That number does not include the money they will lose by reducing dorm capacity.

Departmental budget cuts and pay cuts for top administrators might be considered in the long term, but Bethke said that for now, “the immediate situation is fine.”

“The idea with the next round of activities — we want to do things that are measured and in anticipation of some declines, but that are not permanent and overly damaging to the institution,” he said. “… As we get into the fall, we may find that the situation is as bad as it could be, that we may need to do more than that — more disruptive things, more difficult things.”

It is unclear whether furloughs and lay-offs for faculty and staff are being considered.