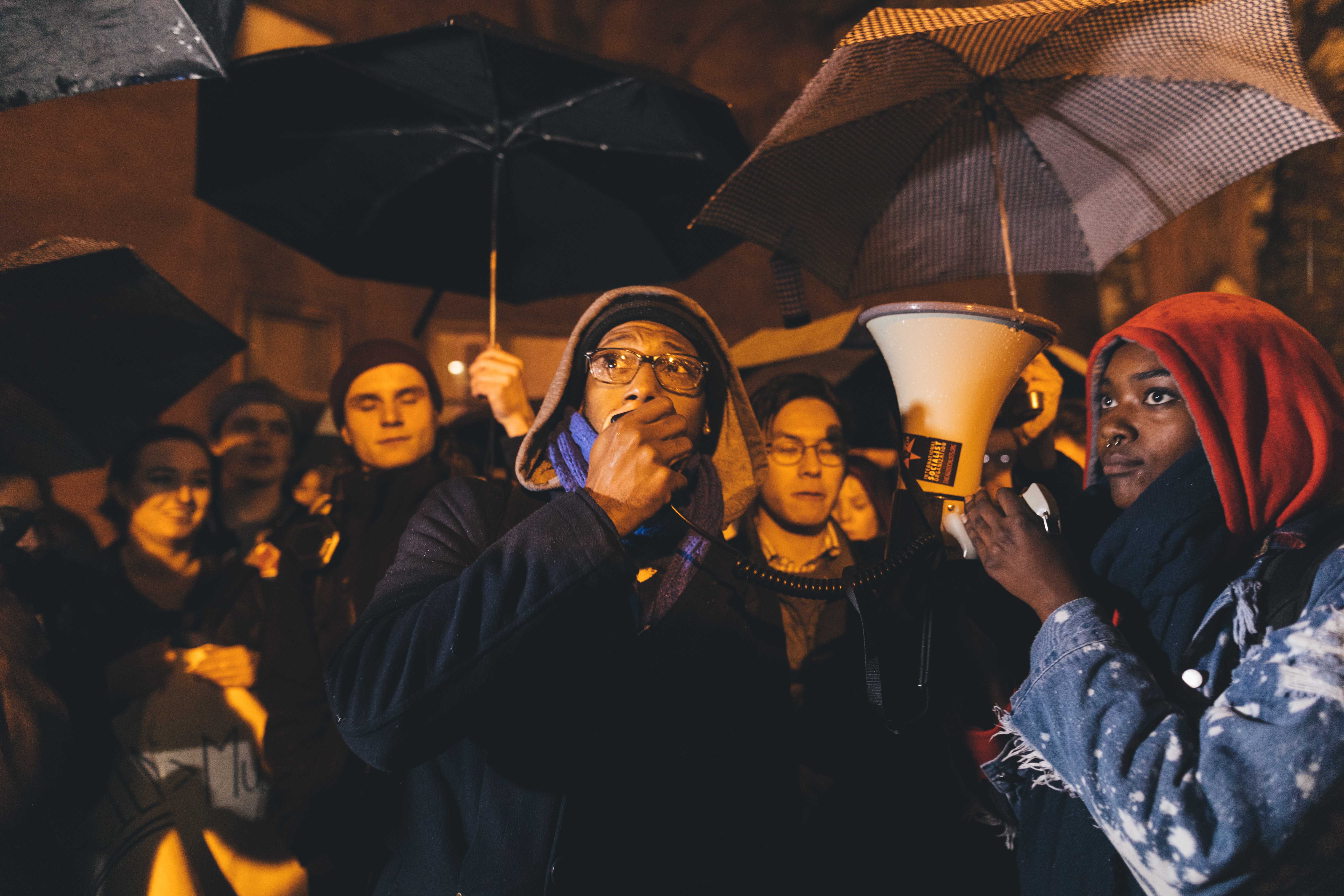 Days before the event, Students for Reproductive Justice (SRJ) and DePaul Socialists organized a Facebook event which attracted over 100 students not affiliated with either organization to join the groups in protest.

As Murray took to the stage, a large group of students stood up and urged others to join them in a walk-out, chanting as they left.

“I don’t think we need to stay and listen to this racist, pseudoscience and if you agree, come outside and protest Dr. Murray and the DePaul Republicans with us,” one protester said.

While a few members of the remaining crowd booed those involved in the walk-out, Murray said he applauded the dedication the protesters showed by standing in the rain to demonstrate their own values. 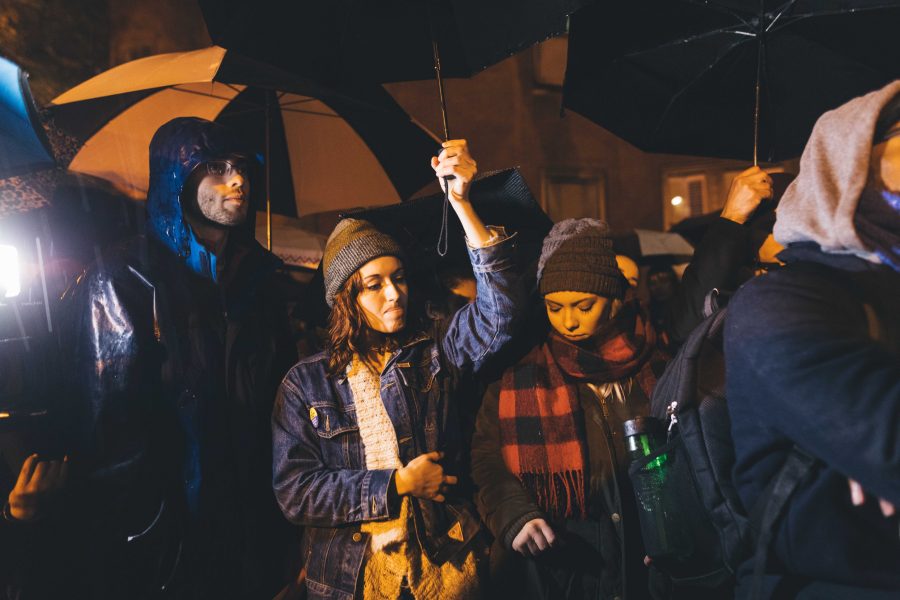 Gallery|10 Photos
Students huddled under umbrellas to shield themselves from the pouring rain. (Josh Leff/The DePaulia)

Outside Cortelyou Commons, some protesters held signs condemning Murray as others held umbrellas, shielding the signs from the torrential downpour. Protesters yelled into a megaphone, chanting, “Hey Murray, let’s face it. Your science is racist,” and “Racist, sexist, anti-gay, right wing bigots go away.”

Senior DePaul Socialists member Sam Peiffer believes the protest’s success was due in part to the organization that went into the protest.

“We went into it with a plan, everyone was on the same page and we were prepared to deal with any security situation that could arrive,” Peiffer said.

According to Peiffer, the protest had an attendance greater than the attendance of the event itself. Peiffer believes organizing the event demonstrated their determination to support those affected by racism and sexism.

“Under the Trump administration people feel intimidated. This protest shows that we can stand in solidarity and fight (the right) back with our free speech,” Peiffer said. “We outnumbered him. We stood in the rain for two hours chanting and speaking to each other. People shared a sense of collective hope. People see that if you come out in large numbers, you don’t have to be afraid to speak out in support of an anti-racist movement on our campus.”

Junior Jennifer Holtz, a founding member of SRJ, said protesting Murray was important to her because she believes Murray having a platform to express his views enables a culture of hate and encourages growing sentiments of white nationalism.

“Charles Murray uses rhetoric and pseudoscience that puts white men on a pedestal and assumes women and people of color are at a natural disadvantage,” Holtz said.

Peiffer agrees with Holtz’s sentiment that Murray having a platform at DePaul could lead to a stronger culture of hate, racism and sexism.

“Within the context of the Trump administration, Charles Murray being toured around to different campuses around the country provides a pseudoscientific facade for white supremacists and right-wingers to hide behind,” Peiffer said.

Murray rejects the idea that he is a white nationalist, saying that his views have been grossly misrepresented by the media and his critics.

“Give me anything I’ve said in the dozens of hours on YouTube giving lectures, give me anything I’ve written where you can say, ‘okay Murray, explain away this, because this sure sounds like you’re a white nationalist,’” Murray said. “There is nothing that I have said or written that justifies that. I’m a Libertarian for heaven’s sake. How can you be a Libertarian and be a white nationalist? They’re contradictory.”

According to Murray, when critics quote his work to display what they believe to be science that supports white nationalist ideas, they do not provide the context necessary to understand why a particular race or sex statistic was included.

On Tuesday afternoon, DePaul sent out an email stating that it does not endorse the views of Charles Murray, nor “do they reflect our values as a Catholic Vincentian university.”

“We are committed, however, to the free exchange of ideas through intellectual discussion and dialogue within our educational environment,” read the email, signed by Vice President of Student Affairs Gene Zdziarski and Vice President of the Office of Institutional Diversity and Equity Elizabeth Ortiz.

Last month, protesters at the University of Michigan shut down an event that Murray was speaking at because of the views and research the speaker highlights in his book, “The Bell Curve: Intelligence and Class Structure in American Life.” The book attempts to show how intelligence can be attributed to genetics rather than environmental factors.

Protesters at DePaul, however, did not disrupt Murray’s speech beyond the initial walkout. Many people believed the event had the potential to become violent, similar to the  Milo Yiannopoulos event at DePaul in 2016 that was shut down due to disruptions from a Black Lives Matter protest. DePaul covered the security costs of the event, using Public Safety, the Chicago Police Department and a private security contractor.

Murray said he does not mind protesters so long as he is allowed to speak. He also says he welcomes people to challenge his ideas in an open dialogue.

Student protesters like Gabriel Bullock felt like the newly established speaker review board dropped the ball on allowing Murray to be invited to campus.

“(The university) says this guy doesn’t reflect DePaul’s beliefs and goes against the Vincentian Mission, but they still allow (Murray to come to campus),” Bullock said. “They’re contradicting themselves.”

Peiffer, however, believes involving DePaul’s administration would work against groups opposing right-wing ideals, as some Republicans have started to claim that their freedom of speech has been jeopardized.

“We do not want to go to DePaul’s administration to silence people because that plays into (the right’s) narrative,” Peiffer said. “A big part of their recruiting practice is that they are victims and that they are martyrs of free speech, but simultaneously, the right uses violence and intimidation to silence others’ free speech. We need to prevent these ideas from spreading further.”

Peiffer believes using the administration to silence the right could be a double-edged sword.

“This power is used to restrict left and anti-racist activists as well as the right,” Peiffer said.

According to Murray, as this misrepresentation of the ideals and views of working class white Americans continues, anger rises within this group. This anger is what led to working class whites to vote in a block this election cycle, which Murray says is uncommon in this voting group.

“Maybe if it’s okay for women and blacks and Latinos and gay people to identify with their group and then blame somebody else for their problems, it’s okay for me to do that too,” Murray said. “I think what you saw with the Trump election was whites beginning to vote as an identity group, which is a group who hasn’t voted in a block until now.”

Murray said America needs another Great Awakening, referring to a religious revival that took place in the 18th century.

“The Civil Rights movement was a secular Great Awakening,” Murray said. “It featured speakers who moved people in a way which was very similar to the religious Great Awakenings.”

Following his speech was a question and answer panel, which despite protests outside event doors, went uninterrupted and served its purpose as a platform for discourse. Several students challenged Murray’s controversial theories, while several others pressed for more insight into his ideas.

DePaul College Republicans president John Minster was excited to have Murray come to speak at the university.

“We thought about who is someone who can draw a lot of interest and a good crowd but is still in disposition and work and has longevity,” Minster said. “We thought Dr. Murray would be a perfect candidate for that.”

Minster believes the event was a success, but wishes those who walked out had stayed to challenge Murray’s ideas.

“We had some good back and forth,” Minster said. “Some people challenged him, which I liked.”

“I think it went pretty smoothly because what you saw, like Charles Murray said, was students listening quietly,” Polony said. “You don’t know if they were listing attentively, but they were still listening.”

Polony believes the way to conduct discourse between opposing views is to listen to and critically challenge each another candidly.

Murray was paid a $10,000 honorarium by College Republicans and the university paid for beefed up security as well.

For students who wanted to express their disagreement with Murray’s speaking engagement without protesting, professor of art, media and design Matthew Girson organized a “flash murmur” in the John T. Richardson Library where students and staff gathered to read the works of people who have survived racism and oppression.

“I don’t think Murray is worth much of both my attention and DePaul’s attention,” Girson said. “Instead of protesting him directly, I’m offering another model for people to participate in something that’s productive, open and inclusive.”

The works of authors, poets and civil rights activists like Maya Angelou and Dr. Martin Luther King Jr. were spread out over tables on the second floor of the library for attendees to read aloud and discuss. Freshman Maya Baker read a passage fitting for the occasion from a speech on Guatemala’s Day of No Violence Against Women.

“Today is a day where we are pooling all of our positive energy so we can make tomorrow better than today,” Baker read.

The DePaulia’s Amber Colón and Benjamin Conboy contributed to this story.

*An earlier version of this story reported that Murray’s $10,000 honorarium was paid for by SAF-B. This is incorrect as the organization used an alternative form of payment unaffiliated with DePaul University.